Rental power is typically costlier than conventional power because production of it involves short term deals. A rental power company must have power generation equipment ready in its stock. But none of the dozen plus local companies awarded with rental power contracts have any stock of plant equipment or experience in rental power projects. The PDB signed the contracts with the two sponsors on February 4 this year asking them to install and commission their respective plants within 120 days (4 months). Both have failed.

Don't use plagiarized sources. Get your custom essay on
“ Rental Power Status in Bd ”
Get custom paper
NEW! smart matching with writer

The had PDB moved for setting up the costly eight rental power plants with a total capacity of 530 MW, setting March 30 as deadline to begin their operation. The target was set keeping in view the irrigation of last boro crop. But it was missed. PDB could finally sign deals for only 4 projects with a total capacity of 300 MW in February. The PDB had flawless success with two rental power contracts with British company Aggreko that had launched their 200MW units ahead of their deadline.

OTOBI- With the setting up of two power plants with the production capacity of 100 MW each in Bheramara at Kushtia and Noapara at Jessore in an area of 5 acres, the company invested worth Tk 8. 0 billion (Tk 800 crore) there, Managing Director of Otobi, Animesh Kundu, told the FE in an interview. (http://www. thefinancialexpress-bd. com/more. php? news_id=150203;date=2011-09-21) After paying the government Tk 11. 55 crore penalty for failing to launch its 110 megawatt rental power plant in Bheramara in time, furniture giant Otobi btained a court injunction against paying further penalties.

Otobi has also sought Power Development Board’s permission to convert the same diesel fired plant into a heavy fuel oil (HFO) fired plant and sought a new deadline of October 30 in that light. It has done so as a contractor is allowed 120 days to complete a diesel-fired rental plant and 270 days for an HFO-based plant. The PDB has rejected the offer and decided to take the legal battle very seriously. The 110MW plant being set up by Quantum Powers of Otobi was supposed to be commercially launched on June 4.

But it is seriously lagging behind the schedule and its failure has worsened the load-shedding situation. Otobi attributed the delay to “law and order situation” at the project site. Chief of Otobi Animesh Kundu explains why his company chose to obtain court injunction against the penalty by saying that as his company sought to change the diesel-based plant into an HFO-based plant, it needed time to see the PDB’s response. Kundu argued that turning the diesel plant into an HFO-based plant would save the PDB fuel cost of Tk 1,035 crore in the next five years, while Otobi would have to invest Tk 115 crore for the conversion.

PDB officials, however, say that the government had chosen to install a diesel-based plant because it wanted power as early as possible and Otobi had signed the contract promising to deliver that plant. Otobi has signed for another plant based on HFO as well, which it is supposed to launch in October. Rahimafrooz – RZ Power Ltd of Rahimafrooz failed to launch its 50MW diesel plant in Thakurgaon. On August 2, Rahimafrooz achieved commercial launch of their plant, according to PDB member generation Mostafa Kamal. RZ Power official Arifur Rahman told The Daily Star that the company was penalised Tk 5. 5 crore in total for the delay in launching. Rahimafrooz cited technical glitches behind the delay Source: http://www. thedailystar. net/newDesign/news-details. php? nid=152199 – aug 2011. ————————————————- Although the two defaulting companies pleaded for relaxation of the penalty for their failure, the PDB realised the money in two instalments this month. Back in June, the PDB served them ith notices for default. And it would continue to penalise the power companies at the rate of $500 per megawatt each day till their projects go into commercial operation.

This means Quantum Power would continue to pay the PDB huge amounts in penalty as it has set September 30 as its deadline, nearly four months behind its agreed schedule. The company attributed the delay to “law and order situation” at the project site. The penalty money were deducted from the performance security deposit (PSD) submitted by both the companies while signing their contacts with the PDB. Each time the PDB deducts the money, the defaulting companies are supposed to replenish the sum. But Quantum Power has not done so. Staff Correspondent – September 20th, 2010 http://www. thekushtiatimes. om/20/09/2010/delay-in-rental-project-in-kushtia/ ————————————————- ————————————————- Additional Secretary of Energy Ministry Tapash Kumar Roy visited the two under construction 145 mw Quick Rental Power Plant at Taltala under Nawapara of Jessore district Friday. Sources said that the present government called tender to supply electricity to the national grid to cope with the continuous electric crisis of the country. According to tender Quantum of Otobi started construction of 105 mw power plant at a cost of Tk 6 billion on 4 acres of land in July 5, 2010 at Taltal of Nawapara.

But public suffering has hardly lessened as the project remained incomplete. The officials of the company, however, expect they will be able to supply electricity to the national grid by next June. A power plant source said that the company has already constructed tank capacity with 7. 5 million litres of furnace oil and that 6 thousand tonnes furnace oil will be required to run the plant per month. The source also said that technicians and engineers were yet to come from China. So the production could not be possible in time. But they are hopeful to supply electricity to the national grid by June. —- On the other hand, Khanjahan Ali Power Company is establishing a 40 mw Quick Power Plant at a cost of Tk 2 billion on 3 acres of land adjacent the Nawapara Pouroshava. The construction work has been started from August 10, 2010, and it will be completed within two weeks. It will add 40 mw electricity to the national grid. Nitish Mondol, an official of Khanjahan Ali Power Plant, informed that the main machine has been brought from Finland and a furnace oil tanker capacity 26 thousand tonnes has been constructed. Source –   Mon, 25 Apr 2011 12:12:00 – http://www. enews. com. bd/news/125/ARTICLE/13419/2011-04-25. html 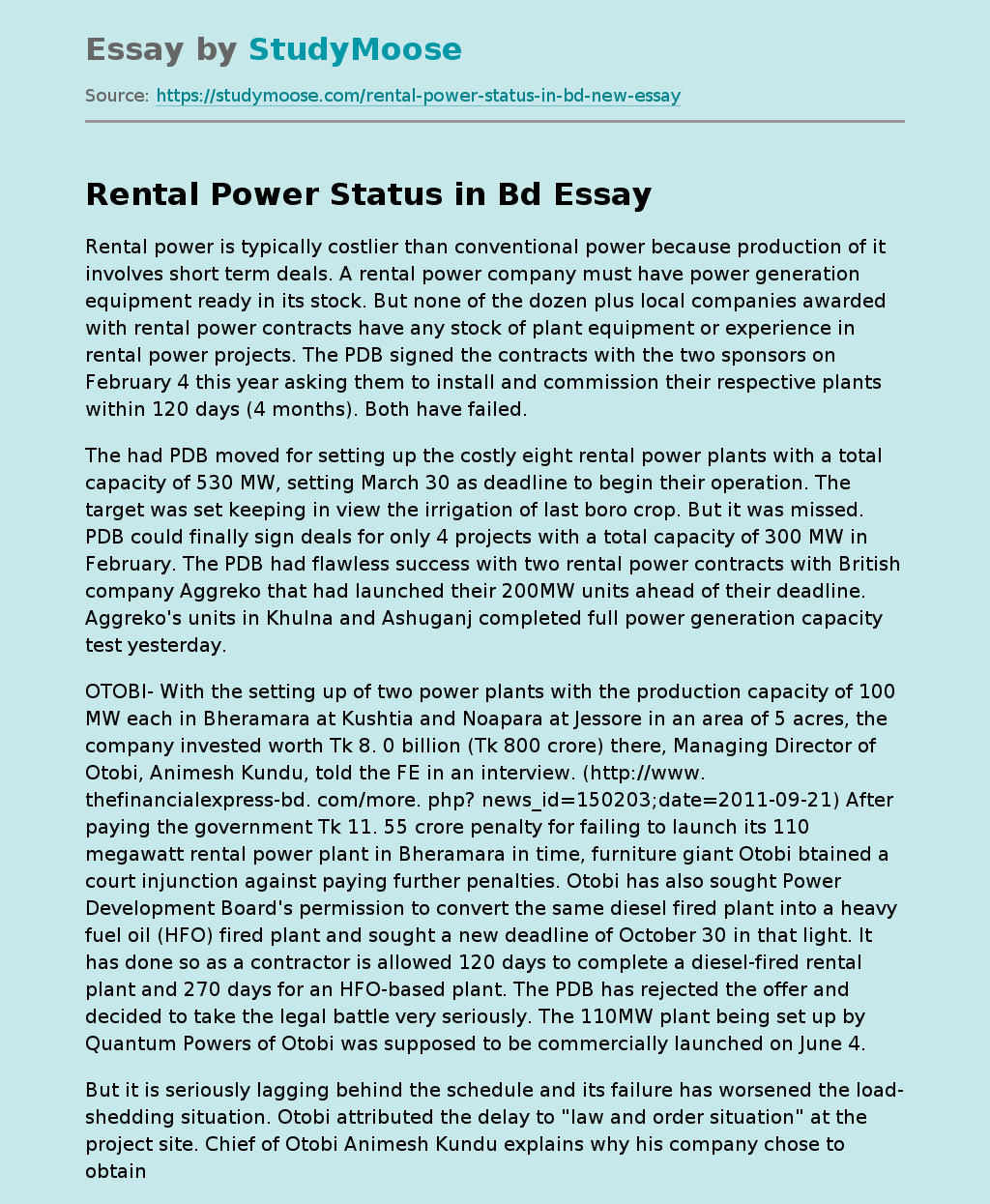