Scientific beliefs have a basis of solid evidence and can been proven using the scientific method and through extensive research. But there is no “scientific method” for proving religious beliefs. That is, there is no way one could know that a particular, or any religion is “true” or “false. ” That therefore, raises a question, “are religious beliefs true in the same sense that scientific beliefs are true? ” I believe that since we have no way of telling indefinitely which religion is the “truth,” that it is simply an important feature of ones personality and outlook on the world, and what they personally choose to believe is “true” to them.

Don't use plagiarized sources. Get your custom essay on
“ Religious Truth vs. Scientific Truth ”
Get custom paper
NEW! smart matching with writer

Like Robert Solomon says in “The Little Philosophy Book,” “Perhaps one could suggest that religious beliefs are more like aesthetic beliefs; that is, they are just ‘personal’ or, in other words, subjective. They are not literally true but not false either. ” In order to determine this conclusion, however, one must look at both the reasons to believe this is true, and also the opposing viewpoint.

What religious beliefs are true? If you believe your own to be true you are therefore saying that all others, who believe differently are wrong.

But at the same time if you claim that others can be true you are implying that your own is false. And if you claim that neither one is true nor false, but it is an issue of personal belief and simply subjective, then what does that say of the many religious believers who believe that their religion is the true one? That what everyone believes may in fact be false? Personally, I do not believe by suggesting that religious beliefs are personal and that just because someone else believes something differently, that they are false.

Religious beliefs are beliefs taught, not seen or proven, but knowing and having faith in their existence. I like the way that Gandhi views religion. His idea of religion was not totally esoteric. He knew that every religion was connected with some belief system supported by rituals and he tried to get rid of the rituals as far as possible and make it more universal. To Gandhi religion was a human institution made my human ingenuity to solve practical affairs as well as spiritual matter.

He explained it as trying to climb a mountain. The mountain represented Heaven, or ones idea of it. And it doesn’t matter which side of the mountain you climb, (which religion you practice) but that all religion have the same goal. That coincides with my belief, that although people may have various different religious beliefs, one does not make the other false. It can be said that the only way something, anything, could be absolutely true is with the support of evidence and proof.

That is where the opposition of my opinion comes in. Scientific theories can be proven and have “evidence. ” But it is also widely believed that religion too, has “evidence. ” Evidence such as the bible, miracles and scientific studies that show the efficacy of intercessory prayer and the effects of religion on person health. However, this does not necessarily prove one religions beliefs to be true, more so it proves the existence of religion as a whole. 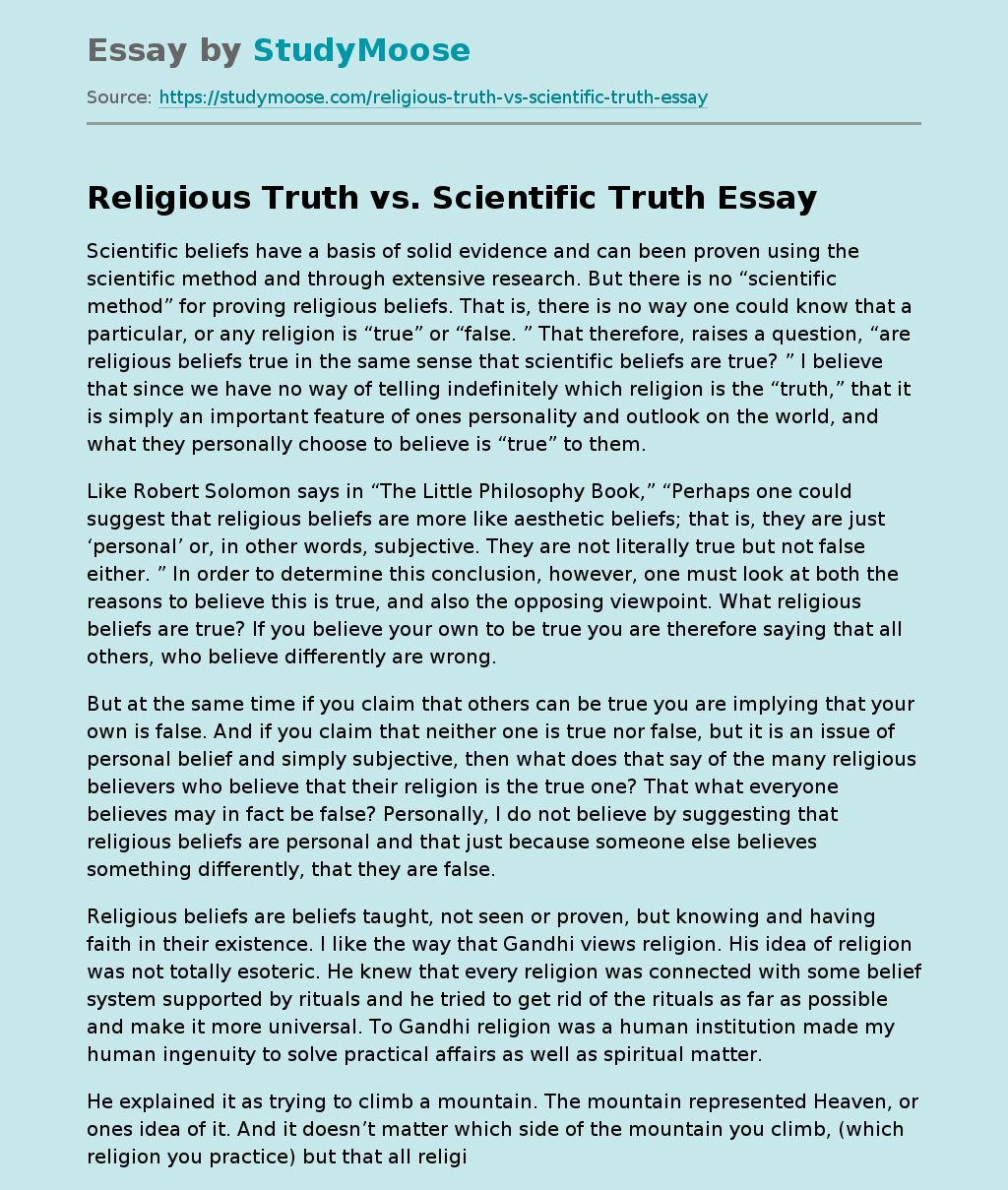