Throughout the colonial period with British North American settlement, the subjects of religion and economics often come hand-in-hand when associated with significance. Although economic concerns of development and exploration had its part in British settlement into the New World, religious entanglement, such as Puritan progression and The Great Awakening , played a bigger role in the rise of the American colonies. The flee for religious freedom and organization based on religion in a colony outweigh the concerns for economics. The American colonies valued their religion, as well as making it the most valuable part of their lives.

Don't use plagiarized sources. Get your custom essay on
“ Religion in Colonial America ”
Get custom paper
NEW! smart matching with writer

In the early 1500’s certain Christians from different European nations went against the Roman authority of the pope. Religious wars/conflicts, competition, and the Protestant Reformation all contributed to a religious motive for exploration and colonization into North America.

Many British immigrants came to the new world not only looking for wealth, but for a religious freedom and structured society. This pull factor created a foundation for religion in the new colonies many people fled the home country to avoid religious persecution and inferiority.

Furthermore, Puritans, who colonized the Massachusetts Bay Colony in 1629, sought to create an empire of religious tolerance. Under John Winthrop, the religious group taught the new colony that the people should provide a whole world a model of Christian society ought to be, as in “A City upon a Hill”.

The groups of people who wanted to separate from the church of England or go against the Roman catholic Pope went to the New World solely for religious freedoms, creating a religious superiority put into their new location.

Immigration into America was by far dominated by groups of people avoiding the oppression and persecution faced by royal and religious leaders in their homeland; religious refuge provided means for these colonists to build upon a belief of religious tolerance and organization.

As colonies were developing and new groups of people/ideas were diffusing, religious conflict and authority became prominent. A major religious event in the life of the American people, The Great Religious Awakening, highlighted the valuable role of religion in the people’s lives. The Awakening permanently reflected the need for religious tolerance and organization in a group of people. Also, religious groups such as the Baptists, Methodists, and Presbyterians (all minority religious groups) took root and grew.

Along with awareness to significance, the movement highlighted the presence of religious feeling among masses of people. A major division between orthodox and “New Lights” increased religious diversity and created a greater competition between the groups to attract followers. This historical event exposed a new way of thinking for the peoples – democracy. In fact, the Great Awakening brought a shared common experience for Americans regardless of race or religion. The Great Awakening brought political and religious impact to the Americans, which still influences the nation today.

Even though religion posed to be the biggest concern associated with British settlement in the New World, economic development proved to contribute in the time period. Columbus’s exploration of the New World was based on the hope to find land, resources, and wealth; all pertaining to the progress and bringing up of Europe’s economy. Moreover, the thirteen colonies developed ways, (such as Jamestown’s tobacco crop) to exploit resources as means for survival.

The North American Colonies Association with trade (Columbian Exchange) put them in competition with other empires to compete for wealth and progression as a community. Economic concerns engaged in the colonies’ organization; however, religion was the basis for British settlement and the foundation for population growth, social movement, and political structure.

Although economic concerns of development and exploration had its part in British settlement into the New World, religious entanglement proved to be more important in the race for American development. Religion posed as the main factor for the peoples, and led them to make decisions and act upon their beliefs. In this colonial time period, religion proved to be a greater power in the daily lives of Americans. 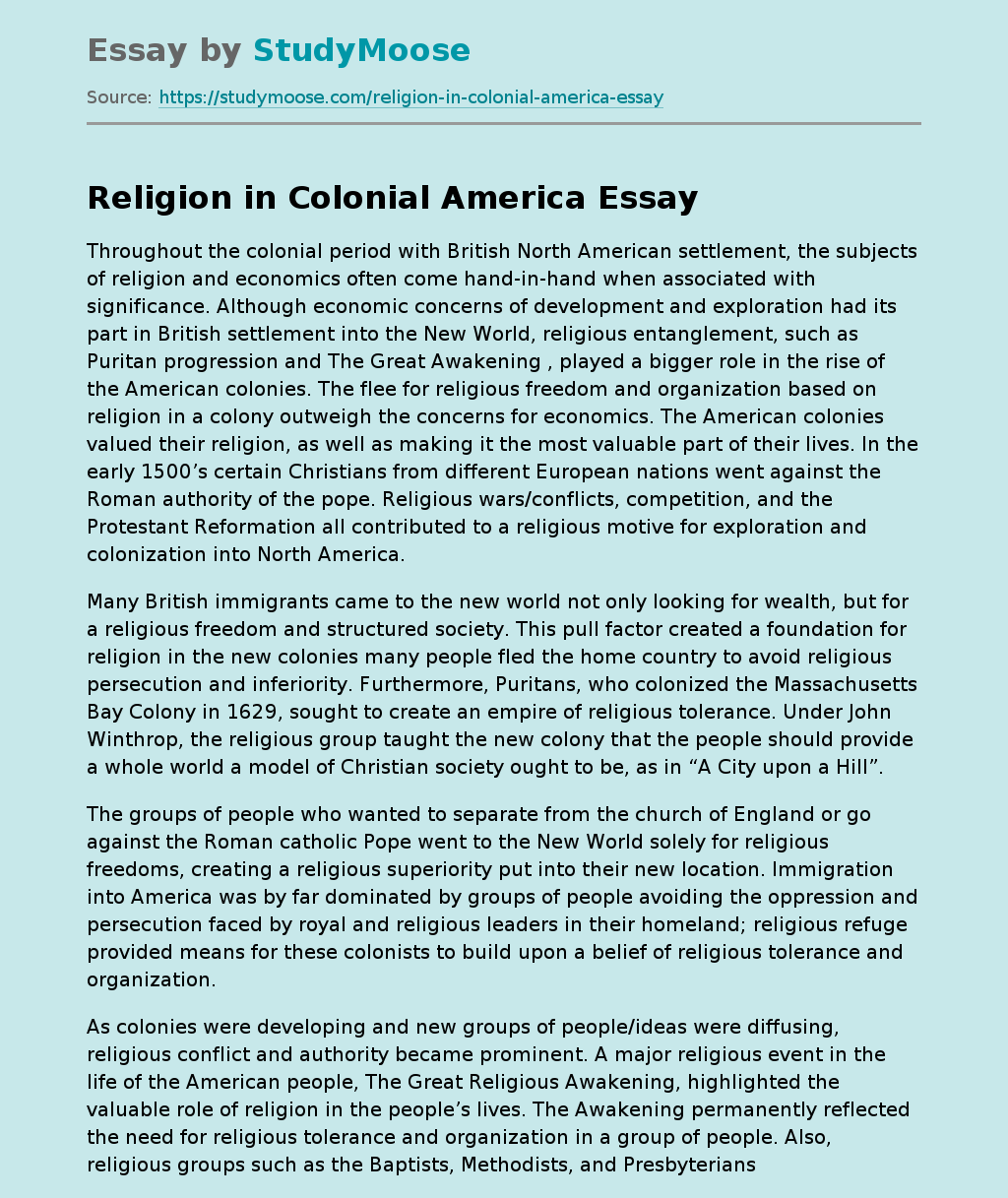