Reliability and validity of obsevation

Interpretivists place great importance on an observer not disturbing the normal social routine of a group, but the presence of an observer is more likely than not to affect peoples’ behaviour. This is particularly a problem with overt observation, because if the group knows that they are being observed, then they are quite likely to change their behaviour. Although covert observation may make this less likely, there is still the chance of a group changing their behaviour due to the fact that they have a new member.

Don't use plagiarized sources. Get your custom essay on
“ Reliability and validity of obsevation ”
Get custom paper
NEW! smart matching with writer

The observer may also be affected by the group and their activities, and whether or not they are influenced by the group is also a problem, because it could make it difficult when the researcher has to write their findings down, and so the data may be incorrect or even biased, and so is not valid. Ultimately however, the observer’s information is limited by what they see and how they may interpret it, because how can they be certain that they have seen events in the same way that the group has, or if they understand it form the group’s point of view?

If these meanings have indeed been misinterpreted, then the validity of the data will be reduced.

The Hawthorne effect has also cropped up in this debate, because it too can raise questions about the validity of the data; The Hawthorn Effect is where the participants or subjects in research projects, instead of acting naturally, try to please the researcher by giving her the results she is looking for.

It is named after The GE Corporation in Hawthorn, Ohio. It is also known as subject or response bias.

Single blind control – is where the researcher or the participant does not know the purpose of the experiment. When the researcher is ‘blind’ this controls for the Rosenthal Effect or researcher bias; i. e. seeing what you want to see rather than what is there. There are also ethical and practical issues with Participant Observation because if the observer hides their real purpose for joining a group, then questions can be raised over whether or not it is ethical to study and observe a group without them knowing that you are doing it.

Aswell as being possibly unethical, it can also be dangerous, because if the group were to find out that they were being observed, then they may not be happy to give their consent about something like this, and the researcher could be placed in a dangerous situation because people may feel that they have been deliberately mislead and lied to, and so the data may not be valid because it isn’t being gotten with consent of the subjects being studied.

Finally, there are also practical problems with participant observation in general because the observer may often be tired or feel stressful at the end of a long day, and so they may not want to or even have time to write anything down, and even if they do, it may be wrong or changed, discerning it’s reliability and validity.

In conclusion to the points in this essay, I think that Participant Observation may lack sometimes in the reliability and validity of it, but if you have to study the more in depth issues like Crime and illegal activities, then Covert Observation may be the only way to get the data that you are looking for because you can’t really go in depth if they know that you are observing them, but if they don’t suspect that you are doling something like that, then you have a better chance of getting the data that you are looking to get.

Reliability and validity of obsevation. (2020, Jun 02). Retrieved from https://studymoose.com/reliability-and-validity-of-obsevation-essay 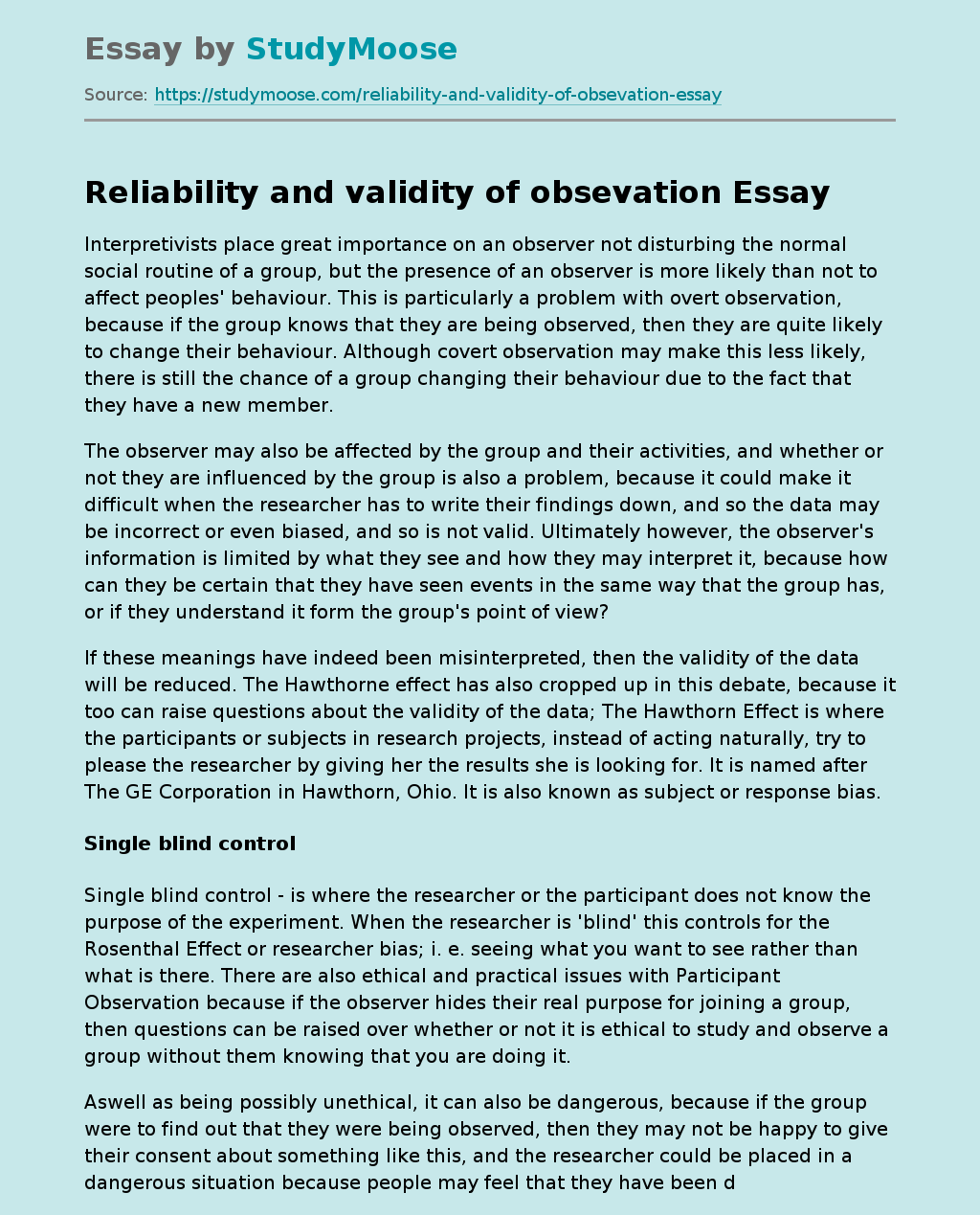