Relationship of Mother and Daughter

Today’s American society is made up of an abundance of different races and people with different cultural beliefs. It is seen as the melting pot of cultures and it is a a place where both men and women can choose to live as their own person; uncontrolled by anyone. Today, women are given more roles in life than they have been given in previous years and do more than traditional tasks. For immigrants coming to America, it can be hard to let go of old traditions and adapt to their new American society.

Don't use plagiarized sources. Get your custom essay on
“ Relationship of Mother and Daughter ”
Get custom paper
NEW! smart matching with writer

They see their traditions as being a part of who they are and try to hold on to them as much as possible as well as try to pass them on to their children. These traditions include the role of women and the ways in which they had to be or act in order to be a “good wife”.

In the stories “New York Day Women” by Edwidge Danticat and “Girl by Jamaica Kincaid, the authors illustrate the relationships between a mother and daughter as well as the cultural shock and difficulty of assimilating to new customs in the American society.

In the story “New York Day Women,” the readers are introduced to the different lives of a mother and daughter and become more aware of the growing distance between them as the story continues. It becomes evident that the daughter is more adapted to the American lifestyle, while her mother still seems to be holding on to her Haitian roots.

The daughter feels that this is hindering their relationship and feels embarrassed by her mother. The mother in this story seems to feel obligated to pass on Haitian values to her daughter and through her small actions, allows her daughter to get to know more and more about her Haitian roots.

According to a secondary source, “in America, it is the mother who incorporates these values into her daughter; thus the mother becomes the symbol of Haiti to the daughter who does not know Haiti. She represents Haitian values, not only by bringing traditions into the daily life but also through what she says and does, by becoming a role model” (Abrahamsson). Not only does the mother try to pass on some of her traditions, but she tries to pass on her native moral values as well. “Why should we give to Goodwill when there are so many people back home who need clothes? We save our clothes for the relatives in Haiti” (Danticat, 351). Even though the mother is far away from her native country and hasn’t been there in years, she still continues to think about her relatives back home and the ways in which she can help them.The mother is critical of how the American society has affected her daughter as well. Her criticism seems to be justified when the mother states, “I bet you don’t even give up your seat to a pregnant lady” (Danicat, 146), and the daughter agrees, stating, “My mother is often right about that. Sometimes I get up and give my seat. Other times I don’t” (Danicat, 146).

To continue, the mother and daughter always seem to have conflicting views on almost every topic. When her mother says she wants to store clothes to send to relatives, the daughter shows a different way of thinking by simply stating that she needs a place to store her exercise bike. When her mother is making jam with cinnamon bark, she criticizes her mother by referring to the cinnamon bark as cockroaches instead. The story seems to point out the distances between the two different generations as the mother also experiences difficulties in adjusting to American society. She watches the lottery drawings every night, without ever having played the numbers, showing that even while being surrounded by the American culture, she still does not fully take part in it. A secondary source supportingly states, “McLeod argues that migrants who come to a new country have all kinds of baggage, and that this has as a consequence that they become excluded, and do not gain feelings of belonging to the new country” (Abrahamsson).

The mother’s difficulty in assimilating into the American society can be a result of her strong bond to her native country. She seems to only take part in the American community just as much as she needs to, in order to stay afloat. The daughter, however, has grown up around the American culture and has a stronger connection to it than her mother. Also, she seems to have an important career, while the mother’s seems to restrictively participate in the American community. It’s evident that just as the daughter does not have the same relationship to Haiti as her mother, the mother does not have the same relationship to America as her daughter. Continuing, the daughter understands that her mother has good values however, she still cannot seem to identify with her mother’s Haitian culture and distances herself from them. Her American society’s influence has superseded that of her mother’s Haitian roots. The surprise comes when the daughter witnesses her mother in the city, engaging with her new surroundings. “I follow my mother, mesmerized by the many possibilities of her journey” (Daanicat, 148).

While spying on her mother, she sees her mother buy and eat a hot dog from a vender, something she has never before witnessed. The gap between the mother and daughter is shown here as the mother reveals her secret life, engaging with the American society. The mother had proven that she had somehow found a place in the American community, but might have chosen to keep it a secret because of the shame. The daughter is in awe as she continues to watch her mother melt into her surroundings, forcing her to re-evaluate how she views her mother. Also, when she sees her mother with a child, it stirred up some emotions within the daughter. She felt jealous of the child and according to Kristine Abrahamsson, “it is difficult for the daughter to see the close relationship her mother has with another child, because she does not have that kind of relationship with her mother herself anymore”(Abrahamson).

She sees the way in which the child looks as her mother with love and admiration and it reminds her of the way she used to view her mother herself. It is only then that the daughter started to appreciate her mother and see her in a different light. She showed that she was willing to change in order to understand her mother better when she stated, “tonight on the subway, I will get up and give my seat to a pregnant woman or a lady about Ma’s age” (Danicat). To conclude, because the author has written this story in the daughter’s point of view, the reader does not now why the mother had finally decided take part in the American society. A secondary source thinks “maybe it is because she wants to get closer to her daughter, but the reader doesn’t get to know this” (Abrahamsson).

In the story, “Girl” by Jamaica Kincaid, a mother, “who by her own past experiences and repression of being a woman in her time and tradition, administers guide to her own daughter in a changed world, to chasten her daughters modern ways and current views on society and their culture” (Falla). Throughout the story, the mother emphasizes her tradition, such as when she explained how to make, grow, and prepare Caribbean food in the ways in which she was taught. She states “ Cook pumpkin fritter in very hot sweet oil,” and “ This is how you grow okra- far from the house, because okra tree harbors red ants” (Kinkaid,137).

One can also infer that the mother believed that cooking should be a woman’s job, which was also most likely a handed-down tradition. This seemed to not necessarily be something the daughter considered only a woman’s job as old traditions have changed. Through the few lines the daughter had spoken, we see the gap between the mother and daughter and can infer that their bond was not very strong. Another area important to the mother was letting her daughter know how to be ladylike. She warned her daughter several times on how to not become a slut or to act like one. We can also assume that this was how the mother was raised and was only trying to pass this on to her daughter.Based on the tradition and customs in which the mother grew up, she seemed to see image as an important factor to her Antiguan society. Through all of the instructions that the mother provided, one can sense that “there is frustration within the mothers tone and demeanor; as she feels no matter what she says, her daughter might be too far gone into her own way of thinking” (Falla).

The writer believes that the mother might feel as though the daughter had assimilated to the new customs and society of her time and will not listen to the instructions that the mother had provided. Although the mother seemed to be stuck in her Antiguan traditions, she later tells the daughter how to make medicine to abort a child. A secondary source states that “the practical nature of this instruction seems to indicate more modern thought while still living in a society of traditions” (Falla).

This showed that the mother seemed to have a glimpse of a more modern American concept, proving some sort of assimilation into her current society. In the end , the mother, though bent on transforming her daughter every way she seemingly could, seemed to love her daughter and wanted the best life for her. Though the daughter barely spoke in this story, we can also infer that she didn’t necessarily hate her mother as well.Through these two stories, we see how customs and traditions can affect the relationship between a mother and daughter. The mothers try hard to hold on to their roots, while the daughters seem so bent on assimilating to new customs and traditions. Adjusting to American society proved to be a challenge for the mothers, but both showed small ways in which the American society crawled into their ways of thinking and acting. It is important to not forget your roots as well as where you came from, but it is also important not to be stuck in your old ways and to adjust to society as it slowly transforms.

Relationship of Mother and Daughter. (2021, Dec 02). Retrieved from https://studymoose.com/relationship-of-mother-and-daughter-essay 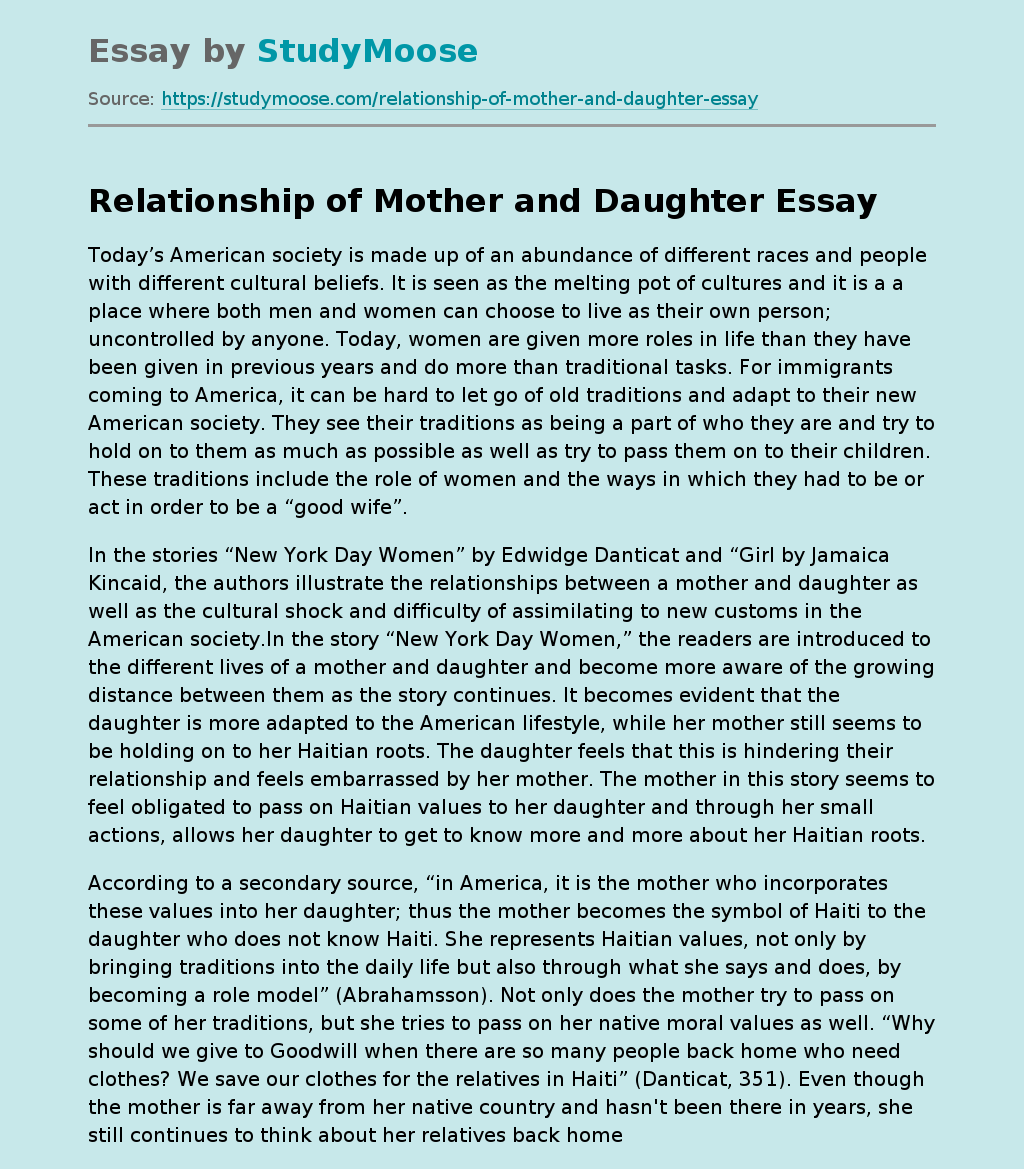