Relationship Between Man And Nature in Tintern Abbey

Set in the tranquil welsh countryside, the opening of the poem is dense in naturalistic imagery impelling the reader to be transported into the magnificent “wild, secluded scenes” and thus forcing the reader to appreciate the power and beauty of nature just as Wordsworth himself does, an approach typical of Romanticism. Samuel Taylor Coleridge saw poetry as “the mediatress between, and reconciler of nature and man”.

This quote lends significance to the fact that the opening stanza immediately connects nature with man, focusing on the emotions that nature enforces and man feels, forming the connection between the two and thus defining the poem as undoubtedly Romantic.

Don't use plagiarized sources. Get your custom essay on
“ Relationship Between Man And Nature in Tintern Abbey ”
Get custom paper
NEW! smart matching with writer

Wordsworth finds solace in the memory of the landscape; it provides him with “tranquil restoration”. This was particularly important for Wordsworth seeing as he suffered from what we now call bipolar disorder and thus, emotionally, he would have been very unstable. Nature acts as “the anchor of my purest thoughts”.

It is Wordsworth’s constant; unlike the world around him that is radically changing in an industrial revolution.

Nature is fixed and impervious to changes in the physical world, much like how Wordsworth would like to be himself. The beauty of Tintern provides Wordsworth with access to a more spiritual state because the place itself is “of aspect more sublime”. This suggests there is an air of mystery about the place, something humans themselves cannot physically grab hold of or clutch; something beyond our material nature.

Nature leads the path to the soul; it instigates exploration of the self because, like nature, the self is not something we can define or grab hold of, but it is the self where these emotions come from.

The beauty provides ephemeral access to a more spiritual existence, brief moments of enlightenment. Because Wordsworth wants to understand these incredible emotions, he wants to know how to transform these brief moments of “ecstasy” into permanent bliss, he is lead to where they are rooted; his inner self.

The understanding of the self is not only one of the main themes of this poem but also one of the key features of romantic poetry. Perhaps the Abbey itself acts as a symbol of the soul because although the poem is about the Abbey it is not described only evoked, much like how the self cannot be described. The poem was written “a few miles above Tintern Abbey” which could represent Wordsworth’s viewpoint in the poem. The way he looks down at the Abbey mirrors the way he looks down into his own soul.

However the fact that the lines themselves were written above the Abbey could suggest that what he has gained by looking at the Abbey or the core of his self cannot be immediately explained, in order for it to be translated into words he must come out of his inner self and search for a way to evoke his experience and he discovers that the only translator his nature; it is nature that provides the link between the inner and outer self. Moreover, it is no coincidence that Wordsworth avoids any localizing detail.

For example he describes “These waters” and “these steep and lofty cliffs”; there is no precision in his description because he wants to imply that there is something beyond nature that cannot be put into words and perhaps cannot even be understood, just felt. The memory of the landscape is so profound it remains with him even in the city, “though absent long, these forms of beauty have not been to me”. This shows not only the power that nature holds over Wordsworth, but also the depth of emotion that he felt.

It seems that the memory of the landscape is not composed solely of the sight but more of the emotions that were aroused in him as he viewed. This suggests that Wordsworth does not perceive the landscape solely through the “eye” but more importantly in his mind too. The sight and picture of the landscape may gradually fade and he would have to go back to the place itself to fully recall the picture but the emotions Wordsworth associates with the setting are rooted in the depths of the sub consciousness and will remain stored there, available for him to summon at any time. However his method of perception has changed over time.

He is no longer a boy and thus sees nature differently. Wordsworth realises that he has changed so much that “I cannot paint / What then I was”. It is this maturity that has caused him to look at nature in a very different manner. Whilst previously in his “thoughtless youth” nature to him was “an appetite: a feeling and a love”. But now he has grown and “that time is past, and all its aching joys are now no more and all its dizzy raptures”. However Wordsworth doesn’t mourn this loss because his maturity has allowed him to appreciate something far more subtle, in the light of the setting suns, the ocean, the air itself.

He is no longer thoughtless, but acutely aware of everything the scene has to offer him. An image that encapsulates Wordsworth’s transformation is the “sounding cataract” which seems to take on two different forms which mirror the stages in maturity that Wordsworth experiences. The first form is simply of the cataract itself and the impression that it forms on the poet, perceived through a clear, unimpeded eye. However a cataract can also mean an “opacity of the crystalline lens of the eye”1 which would reflect Wordsworth’s growing inability to just “see” the landscape solely through his eyes.

He has become less sensitive to just visual images; instead he now relies on his reflective mind which reaches to more “elevated thoughts”. The two different forms reflect a movement from an initial sensory perception of nature to reflection on nature’s, previously hidden, “sense sublime”. The release of “something far more deeply interfused” is accompanied by the dimming of the senses that perceived the initial impression through direct experience. However he doesn’t “mourn or murmur” for this loss because the enlightenment that follows is “abundant recompense”.

His mind now, does not only receive sensations from the outside world, but it also recreates, through memory and imagination, the scene before his eyes. So, Wordsworth can not only appreciate the two sides of nature but also the dual nature of himself. He realises that he has both a consciousness and sub-consciousness so has grown as a person. In his sister Wordsworth sees of his former self “in thy voice I catch/The language of my former heart, and read/My former pleasures in the shooting lights/Of thy wild eyes. Dorothy is obviously similar in character to Wordsworth and thus he feels very close to her.

This is emphasised when the poet describes their kind of shared existence. For example he states; “Through all the years of this our life” and “The mind that is within us” (own emphasis). This would indicate that nature brings them together, providing a shared experience that links them both together. So, if he dies she will still have access to him through this shared mind or shared experience, highlighting the immortality of both the soul and nature. However it may not only be the immortality of nature the poet wants to bring to light.

The mood of this final stanza constantly oscillates between faith and anxiousness. Wordsworth first advises Dorothy to not forget ‘nature’, but this advice then changes into a plea that Dorothy (and perhaps the reader) remember the poet himself. Perhaps the passing of his straightforward youth into the complex “still, sad music of humanity,” has lead Wordsworth to recognise his own mortality. Thus the impetus behind Wordsworth’s final message to Dorothy and to the reader could be his desire for his own kind of immortality.

Just as he would carry the “beauteous forms” of Tintern Abbey with him and draw on them for “restoration”, he wants Dorothy and the reader to carry his lines in our minds and use them, just as he used nature, to venture into a realm of consciousness beyond mortality. Thus in writing the poem Wordsworth or possibly the poem itself has achieved a state similar to nature in that he or it has become the mediator between man and his nature, which was, as I stated in the opening paragraph, what Coleridge stated the ultimate goal of romantic poetry to be.

Relationship Between Man And Nature in Tintern Abbey. (2020, Jun 01). Retrieved from https://studymoose.com/relationship-between-man-and-nature-in-tintern-abbey-essay 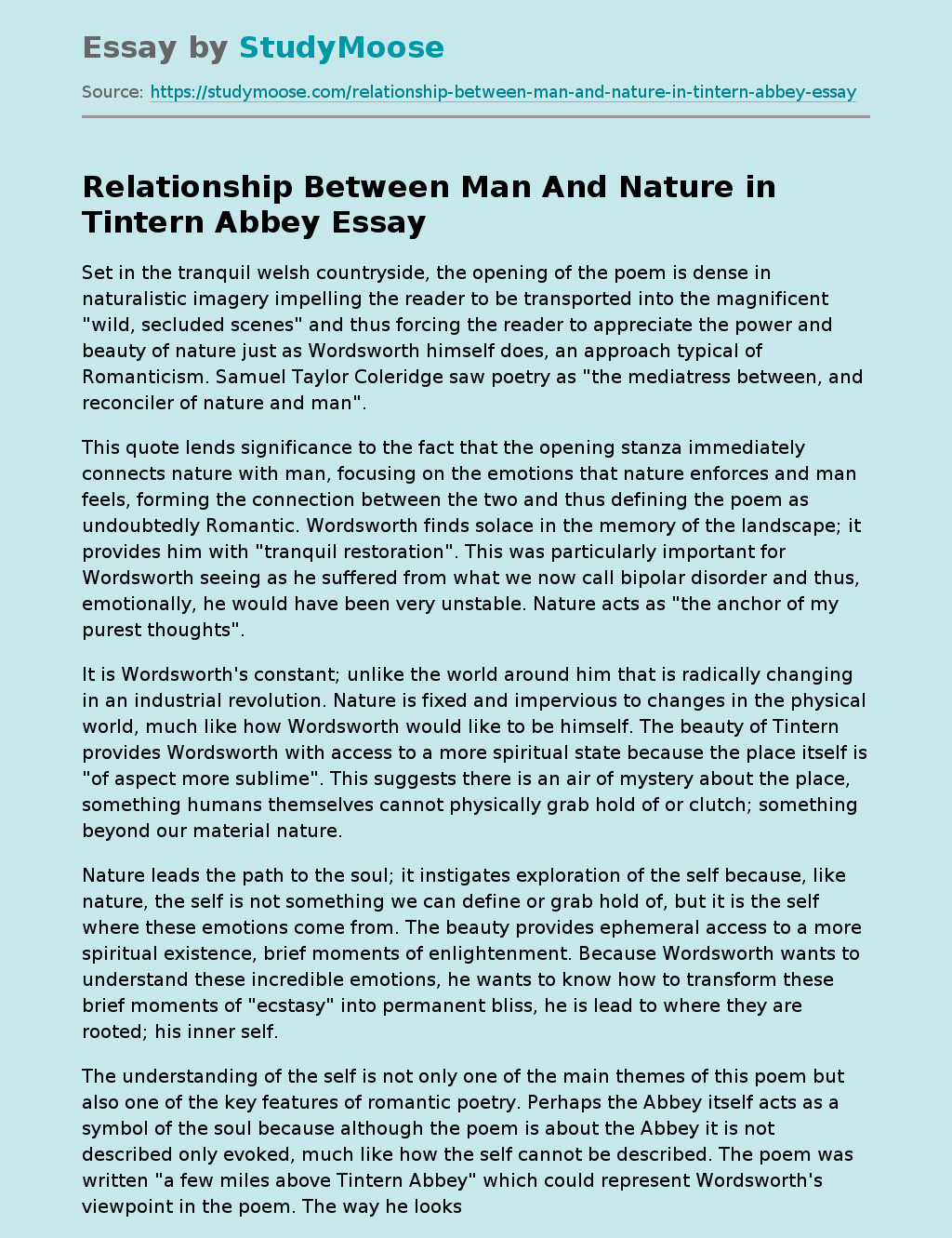