Relationship Between Literature and Environment

Ecocriticism is currently playing a major role in English literary criticism. This is different methods of literature criticism that have been talked about before. Since this is only growing, nobody has yet given a definitive definition of this. For the first time, William Rueckert used the term ecocriticism.

He coined the term in the 1978 article “Literature and Ecology:An Experiment in EcoCriticism.” But since then, no one used it afterwards. In 1989, at the Coeur d’Allene, Western Literary Association (WLA) conference, then the undergraduate student Cheryll Glotfelty returned to the contextual analysis of the term ecocriticism through his article.

Don't use plagiarized sources. Get your custom essay on
“ Relationship Between Literature and Environment ”
Get custom paper
NEW! smart matching with writer

Cheryll Glotfelty is currently a professor at the Faculty of Literature and Environment at the University of Navada, she and many other professors have written several research papers using this analysis method.Even many critics give the definitions for ecocriticism none of these is accepted as correct .But people most commonly used cherlly glotfelty’s definition “The study of relationship between literature and environment ” to explain the term ecocriticism.

.But some people think that natural is better than environmental. One must recognize the difference between the environment and nature. In many places they are both used as synonyms. But this is not correct. Nature is important in this critical mode. Contextual analysis must therefore demonstrate the relationship between literature and nature.Environmental review is the study of nature in the literature. It is a natural worldview. Michael P. Branch and some others claim that human beings are trying to maximize humanity by combining them with other human beings and the environment in which they live.

There are many such explanations for environmental review.Next we move on to the critical mode.

William Ruckard’s essay “Literature and Ecology: An Experiment in Ecocriticism” is featured in The Ecocriticism Reader: Landmarks in Literary Ecology, in which he transforms many theories of biological ecology into literary criticism. “How is humans destroying nature?” Man destroys nature by destroying nature. He says that this wrong attempt by man is an attempt to self-destruct or to attempt suicide. In this world, man and nature coexist, how to collaborate and flourish. We need to find the right solution.Many ecologists have put forward their theories in ecological vision. We think these are not useful for reading literature, teaching literature, and writing about literature. But Rueckert says all of these are really useful. This is the first theory of ecology he claims. “Everything is connected to everything else” This statement is mind-expanding, rather than mind-bending or mind-blowing or mind-boggling.

Most people would not agree with the claim that nature does not belong to man. But now the laws of man must help protect the natural right. William Rookert considers lawyers to fight for them.Rueckert regards poetry as a stored energy and a living thing. Poetry emerges from language and imagination. This is a renewable source of energy. By reading poetry, by teaching and by critique, the power in it is revealed.In the next section of his essay, Rookert describes the poets as being equal to the sun, and poems to the green plants.Rukert states that we are not free to violate the laws of nature. He says that man must suffer the greatest destruction when he violates the law of nature and that the punishment of nature is worse than the punishment of God. Instead of thinking of conquering nature, he suggests that man should live in harmony with nature. This combination is called Symbio.

Eco Criticism became popular as a theory with this name. The easiest way to understand this trend of literary theories is to know what these people are doing.It has to be noted that traditional theories of literature place emphasis on linguistics, cultural and social backgrounds, so eco-critics put all their weight on “nature” and nature and think that nature is the force that directly affects our evolution as a society.

For intellectuals involved in the development of green research, the world is not composed of language and society. They tend to show the role of nature – whether it is in the works or in the general context. However, as it entered into the field of literary theory, a part bifurcated and established itself as solely devoted wing concerned with the (re)reading of literary texts and bringing out the role of nature, representation of nature and natural elements in the literature produced worldwide.In fact, the main focus of green research intellectuals is to register the different places of literature we know that contain a lot of natural integration. However, famous writers, poets and literary figures have always been the central source of thought and discovery in these studies.

Relationship Between Literature and Environment. (2019, Aug 20). Retrieved from http://studymoose.com/relationship-between-literature-and-environment-essay 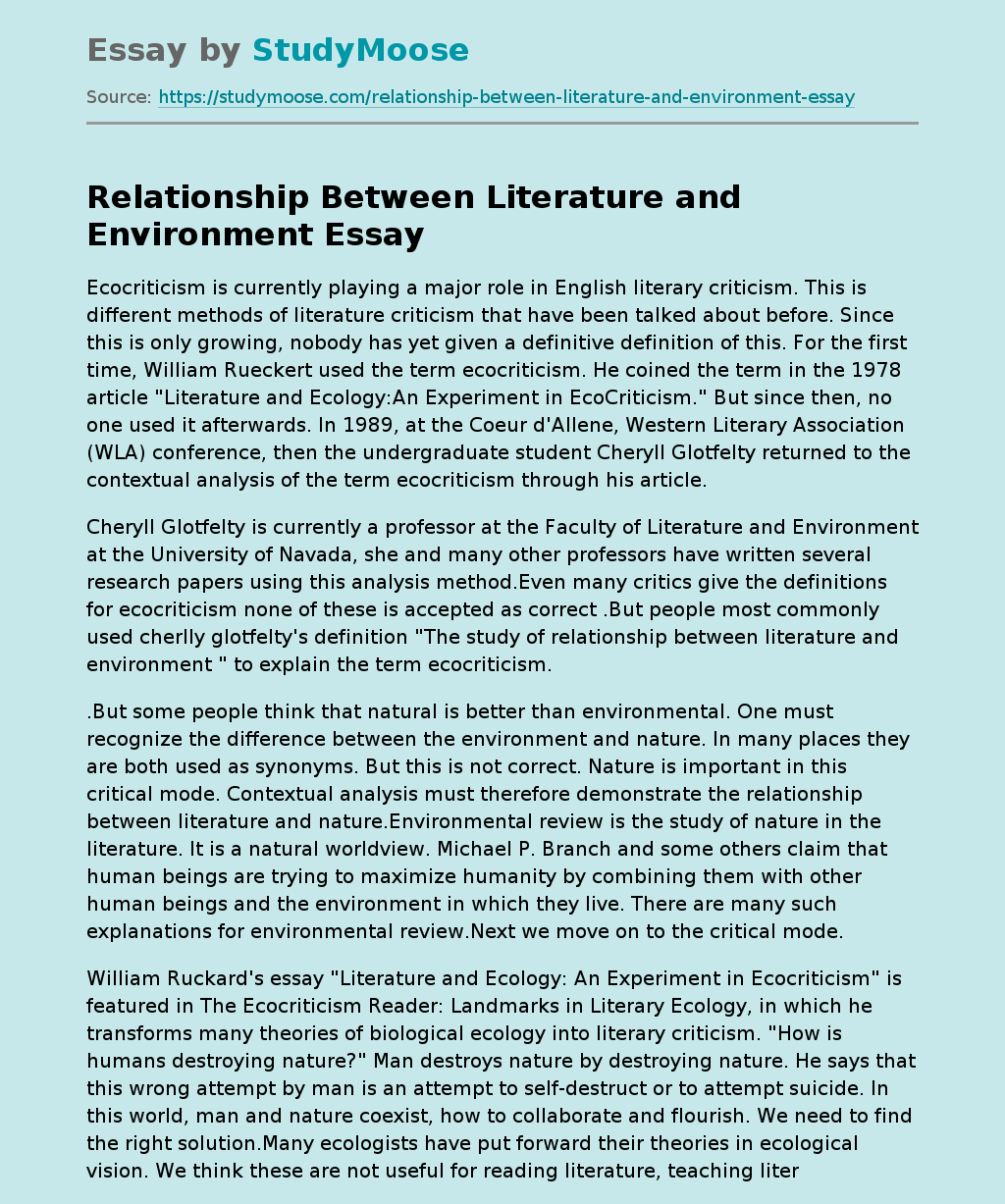