In the next couple of pages the author will firstly discuss the main advantages of the crossroad growing adoption of IFRS, and how does it particularly benefit investors and managers. The author will also be discussing the most significant challenges of the adoption and expansion of the IFRS in the future. Further more the author will, suggest how the IASB and its key constituents should face these challenges and overcome them.

IFRS International Regulatory framework for financial reporting Before we get into discussing the advantages of IFRS let us first begin with a little introduction about what IFRS actually does.

Turn in your highest-quality paper
Get a qualified writer to help you with
“ Regulatory Framework for Financial Reporting ”
Get high-quality paper
NEW! AI matching with writer

Regulatory framework for financial reporting was designed in order to form a sort of common language that businesses and companies accounts are clear and comparable in international environments. This has started as a consequence of expanding of international trades and shareholding. This system has been particularly welcoming by companies that are operating in several countries. This is due to the fact that by adopting the same system companies can easily compare and view their financial statements.

The IFRS was fist introduced to the European Union in order to systematize accounting standards. This concept quickly became popular even outside of the European union and was adopted by countries all over the world. Globalization is a great factor why IFRS is being adopted by countries outside the EU, as accounting can be though of as a language form and if all companies report under the same regulatory framework communication between them is much clearer and faster.

Advantages of the Crossroad Growing Adoption of IFRS

In the researchers opinion the IFRS is highly important, or in other words beneficial for managers nowadays, because it makes a lot of things easier. You can compare it to a Border free Europe through the European Union. With the IFRS managers have an international accounting handbook which makes merges and acquisition for international companies easier because there is only one accounting language. As already mentioned earlier not all countries have adopted the IFRS system. Due to increasing globalization most companies are pro adopting the IFRS system as investors or in other words users can easily understand it across the world. Even before the International Regulatory framework for financial reporting was introduced was companies used different Generally Accepted Accounting Principles (GAAPS). As Europe has its most dominant system used the (IFRS) so does for example India and the US have their own systems that they choose to adapt. The fact that there are different financial systems involved can make it difficult for an outside user, since they cannot fully understand the financial reporting system that is adopted by another country.

Nowadays with the increasing number of global investors and information exchange there is an increasing need for common financial reporting language. The International Accounting Standard Board have accomplished that 120 countries worldwide have adopted the IFRS system and made it the single set of standards. An advantage for adopting this system would be simply the strengths of jurisdiction increase. Some countries had no problems with this but other chose to take different paths. The first major adoption of IFRS was in 2005 when 7000 EU countries began using the new system. Japan has adopted this system a couple of years later and by 2009 the IFRS was officially accepted. On the other hand still a large number of countries have not adopted this system amongst them is U.S that has celebrated a 10th anniversary in 2010 of the ISAB system. Still we can see an increasing pattern of countries that are adopting the IFRS regulations. Of course U.S has its reasons for not accepting the IFRS system and they themselves have described their system as exhaustive and they are as well dealing with a lot of difficulties and sensitive subjects such as pension accounting or lease accounting.

Of course this system has a lot of benefits. As many of its standards the IASB has lead the use of a fair value accounting system as an replacement to the traditional cost accounting. The greatest benefits of this system are that it’s considered to be more relevant and transparent. A lot of countries could not accept the IFRS system completely due to their local politics or other economical reasons. Some countries on the other hand have adopted the system completely for example Australia or Japan. Other countries accepted the system partly just for specific segments such as Banking. China and U.S have also eventually made their adjustments to convert to IFRS in order to remove differences between national accounting standards. Even big audit firms that included Deloitte, PWC (PricewaterhouseCoopers), Ernst & Young and KPMG have agreed that by replacing the local system with the IFRS was a solid way of insuring international comparability of financial statements. The fact that this was accomplished shoves that accounting worldwide has reached harmonization and this is a great advantage for companies and users worldwide. Convergence champions like China, rather want to have the Convergence, because they want to remain flexible and adapt the accounting rules to the particular needs of the national economy. This is done so that they can keep an eye on the local economy.

The Chinese government also fears that Chinese companies could use this as a tool to manipulate with reported profits. There are more then one negative aspects of the IFRS such as strategic tension on fair value accounting. This type of accounting has been greatly criticized as for being difficult to apply as well as subjective mostly in poorly developed markets. Fair values also seemed to be more involved with the short-term conserves and this put the long-term stability of businesses and even economy at risk. The problem with fair values was that due to short-term recording that were increased temporally in market values in financial reports. This was a problem as it created panic by forcing reduction in the book value of an asset. Gilles de Margerie (CFO of the French Bank Credit Agricole) says: “The IASB has been too dogmatic, too reluctant to listen”.

The main problem was that the fair value measurement of derivatives required by IAS could know the income statement of many EU-Firms. In the year of 2004 the European commission has for some time being excluded the disputable parts of IAS 39 from its agreement. Even though there were problems with the IFRS it is being worked on and the imperfections are being corrected. Another negative aspect of the IFRS is that the IASB stakeholders argue that fair value standards for banks financial reporting have inflated their asset values in the economic boom times and due to that overstating their losses when the financial markets collapsed. So practically their cant be global banking regulation if there are different accounting systems. Due to this fact the IFRS can no achieve its full potential. This imposes a lot more debatable questions on the IFRS regulations.

Should it put more stress on full adoption or convergence with its IFRS rules?
Should it make more adjustments to make it easier for the U.S. to join the system?

In addition to IFRS should it also focus on harmonizing enforcement and auditing systems?

If we find answers to this questions and find regulations that say that every country is running with this system the IFRS “mission” will be a very difficult task, because like already Ian Mackintosh, head of the U.K. Accounting Standards Board said: “Convergence is an impossible dream. You will always find issues where you basically do not agree and where both sides have good reasons for not agreeing. You have to make decisions”

In this assignment the author has discussed the main advantages of the crossroad growing adoption of the IFRS, and how it particularly benefit investors and managers. The author has also discussed the most significant challenges of the adoption and expansion of the IFRS in the future. Further more the author has, suggested how the IASB and its key constituents should face these challenges and overcome them. In the authors view there should be a adequate balance found between the IFRS standards and the convergence of other countries that did not adapt this system. This should be done, as it would be convenient for everyone of the standard were similar in some ways. 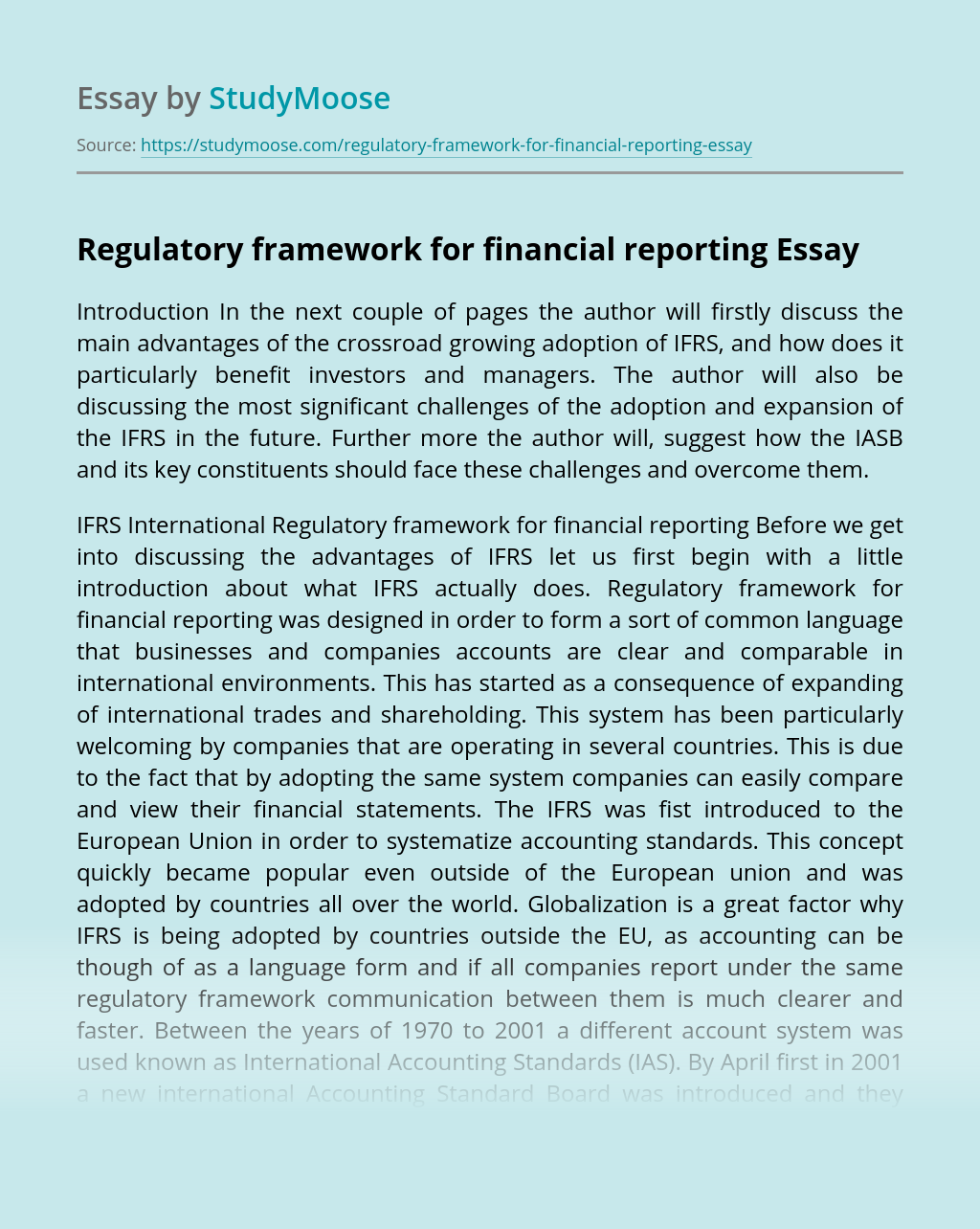 Turn in your highest-quality paper
Get a qualified writer to help you with
“ Regulatory Framework for Financial Reporting ”
Get high-quality paper
Helping students since 2015
Stay Safe, Stay Original