Regency Plaza is a mixed-use multi million US dollar project carrying quite high stakes. So the risks of it should be evaluated beforehand and managed well in order to make sure that the project wouldn’t over run budget or time and end with a successful result. Here we use the “Four Stage Risk Management Process” to evaluate the risk management happened in Regency Plaza project.

Evaluation: how well the project was analyzed and source of the risk identified.

Don't use plagiarized sources.
Get Your Custom Essay on Regency Plaza Case Study – Risk Management Process, Review of the Options Just from $13,9/Page

In the below table we will take a closer look at how well the risk was identified by Kris Hodgkins.

Description| Identified/Not| Constraints and Remarks|
Size the layout of the floor plate| Identified| Complicated due to condominiums lying over the hotel rooms over a parking garage, which resulted in fixed column spacing and elevator core locations. | Number, mix and size of the condominium units| Identified| BRA approved maximum number of units to be built was 96, which Hodgkins chose opposing Farley, the marketing consultant’s idea of building spacious 72 units because of Hodgkins’ expected performance targets of 4.

4 million gross sales and $26 million net profit out of the project.| Time Constraints| Not identified| Project was on a tight schedule as Kelly Constructions was convinced to cut off 03 month from the estimated 32 months of the project duration, with a promise of minimal changes to the original design.

Eventually with the allowance of individual customization in the units, customers (i.e Millers) required drastic changes.| Manpower deficiency| Not identified| Neither RHG nor Hodgkins expect customers to require big alterations. But customers did, causing constant changes in the project design decreasing manpower and efficiency of the construction.| Extra Costs and Delays| Not identified| RHG allowed customers to modify their units as they please as long as they pay for additional cost but customers asked for big modifications, the cost for wasted materials and extra cost for demolition and delays in construction would go upon general contractor since they got the project on fixed sum contract.| External Factors| Not identified| It is mentioned that in later phase in the project, sales were low and the local economy was weakening.| Customer Dissatisfaction/Complaints| Not identified| With the deficit manpower and budget overrun, service became slow causing several buyer complaints.|

Below is a table for assessing the above-identified risks.

Risk | Likelihood to occur| Impact| Effect on the project| 1. Issues regarding size of the layout and floor plate| Certain| High| Project design is affected because of the constraints.| 2. Decisions on number, mix and units of condo to be sold| Certain| High| If 96 units of condominiums to be sold, they would need better marketing and excellent finishing touches.If 72 units to be sold, condo sales might not hit targets Hodgkins was supposed to hit.| 3. Time constraints (Project falling behind schedule)| High| High| Delayed project meant extra cost, which can frustrate the General contractor and customers| 4. Manpower deficiency| Medium| High| Deficit manpower leads to slower work completion and project falling behind schedule| 5. Extra costs and delays| Medium| High for General contractor, Medium for RHG and High for the project| As the General contractor works for Fixed Sum Contract extra costs, which exceeds budget, would go from their profit. Delays would cause customer satisfaction and loss of sales| 6. External factors| Low| Medium| As the target market is wealthy couples, factors like Economy wouldn’t matter much so would not affect sales in a drastic manner| 7. Customer Dissatisfaction| Medium| Medium| This might lead to loss of some sales/ potential customers because Hodgkins’ marketing strategy is word of mouth and dissatisfied customers wouldn’t recommend the condos to their friends/family|

As mentioned above, many of the risks were highly likely to occur. Should any of those occur, it’s ultimately project manager’s task to have a contingency plan, which Hodgkins didn’t have. She also made wrong assumptions in the planning phase of the project thinking that customers would require only minimal changes that wouldn’t obstruct construction process. As mentioned above some risks posted threat to Hodgkins marketing strategy as well but she didn’t consider the risks and eventually failed in developing Risk Response program.

As a result of not having a Risk Response plan, Hodgkins could not reduce the impact or the effect those events had on the project. It is true that, she had to manage a multi-faceted project but she wasn’t able to even reduce the additional cost, which was occurring due to her planning and marketing failures, and the deadline being overrun due to various delays.

4. Review of The Options

Moving the Millers to a higher floor would buy more time so the cost of the changes can be assessed and approved by the Millers. As there’s no interior work done on units on the higher floors there won’t be any requirements to demolish anything or to put construction of other units/floors on hold, which would content the general contractor and also Millers can achieve the changes they want after approving the cost. There will be no wasted materials also. This option is more advantages because it would keep the general contractor content with the project.

On a disadvantageous note, there’s the possibility that Millers might refuse the option as units on the higher floors are expensive and not identical with the unit they chose and also if Millers chose the unit, their interior designer might have the rework her designs which would cost Millers more. But given the good points and bad points, this option remains as the most feasible one. 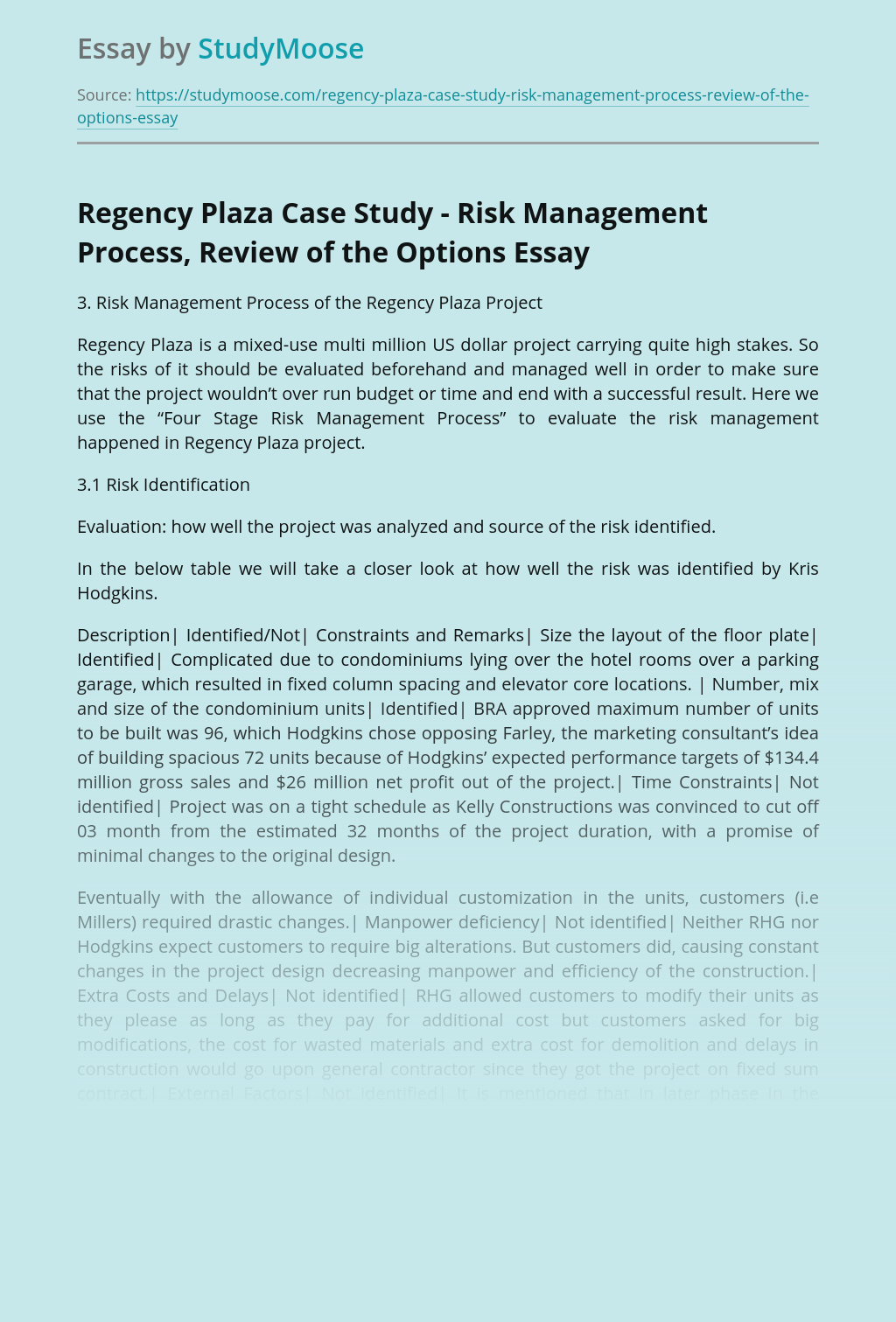 Decision Making Decision making involves making a selection among competing alternatives. * What should we be selling? * Who should we be serving? * How should we execute? Strategy Strategy is a game plan that enables a company to attract customers by distinguishing itself from competitors. Focal point of a company’s strategy should be its... VIEW ESSAY

1. Wilkerson company ‘s major productions are pumps, valves and flow controllers. Pumps: The competitors had been reducing prices on pumps. Since pumps were a commodity product, the company matches the reduced prices to maintain volume. However, it has dropped pre-tax margin to less than 3%. Valves: Although several competitors could match its quality, none... VIEW ESSAY