“Refugee blues” is 1 of the poems written by W H Auden. It is about a sad and terrible plight of being a Jew in the wrong place at the wrong time. Obviously, as a refugee, the couple has lost their home, their country and their identity. The melancholy feeling comes through strongly in the blues – a sad song. Though the poem is about 2 people at a particular time in the past the thoughts and feelings of the poem’s narrator might be similar to situations in any part of the world 2day.

Turn in your highest-quality paper
Get a qualified writer to help you with
“ Refugee Blues by W.H Auden ”
Get high-quality paper
NEW! AI matching with writer

This poem is set in Germany in 1930’s when the Jewish ppl were being persecuted by the Nazi regime. The poem begins by introducing a city with 10 million people in it. Some have the luxury of living in a mansion; this is directly contrasted with the rest who are living in most disgusting conditions, ‘holes’. There is not even a ‘hole’ for this couple – they are beneath the usual poverty line, the repetition of the sentiment, of having no room for ‘us’, makes it sadder.

“Yet there’s no place for us, my dear, yet there’s no place for us” The next stanza shows how they are exiled from their own country and cannot return. They can see it in a map, can look at it in an atlas – but cannot return. They are resigned to this fate when they say ‘We cannot go there now’. The tree is an interesting symbol in the next stanza. The tree can go through nature’s cycle and seem dead at certain times of the year but can be re-born, can grow again.

It’s natural for things to be given a new chance every year in nature, to bloom again.

However, this is contrasted with man-made documents that, once lost, can never be recovered: ‘Old passports can’t do that, my dear’. They then go to three places where they need help. The consul, presumably at an Embassy, treats them badly and violently bangs the table and makes a ridiculous statement: ‘If you have no passport you’re officially dead! ‘ Can’t he see that they are there in front of him, alive, looking at him? The speaker’s calm and controlled response of ‘we are still alive’ makes the reader side with the speaker in sympathy.

Next they go to a committee which was no good either. They offered a temporary help of a ‘chair’ but telling them to come back ‘next year’, is a way of stating that they shouldn’t come back at all. The desperation is creeping into the tone of the speaker now: ‘But where shall we go today? ‘ They need help now. Next year is way too late, Help is needed today. They are doing things properly and at the public meeting, their next stop, they are demonized and stereotyped as a group of thieves as the committee member says ‘they’ will steal our ‘daily bread’.

The calm acceptance of this slur makes the speaker of the poem seem better when he states ‘He was talking about you and me’. Symbolism is thick in the next stanza and the thunder that is Hitler coming to kill all the Jews is a drastic change in tone; it’s threatening, ominous, and deadly. The next few stanzas refer to him observing the world with a new perspective: it’s wrong that animals are treated better than humans and they wear smart clothes and have doors opened for them (metaphorically they have had all the doors shut on them).

The fish are free because they have no rules, no religion, no politics – nature is better than the conditions they find themselves in. Even the birds are free to sing as happy as they like. The huge sympathy we feel for this couple is built up even more in the last two stanzas: the hopes and dreams of just having one room in a building made up of a thousand floors is awful. This is contrasted with the fact they are exposed on a ‘great plain’ in freezing conditions in the ‘falling snow’ with ten thousand soldiers looking for just the two of them.

They have not only been helped by anyone but people want to kill them – for being Jewish. The poem has a rigid pattern concerning the use of repetitions and a simple rhyme scheme. Through the whole poem there is a refrain as the author always repeats the words “My dear”. Almost every stanza starts with a verb. The structure of the text is carried on through the use of contrasting images: the mansions and the holes, expressing the gap between normal rich people and Jews, the treatment of the Jews, who can’t participate anymore to social life.

The language used is common, colloquial, informal, while the tone is sad, resigned and melancholic. Punctuation is used effectively. the repetition in the end of the verse makes it even more melancholic. .The hypothetical speaker, a German Jew, is concerned about Jews’ conditions, regarding in particular homeless people, social differences . Those make the song no less ominous. Death is present throughout and the poem ends with the image of the soldiers looking for the Jews. 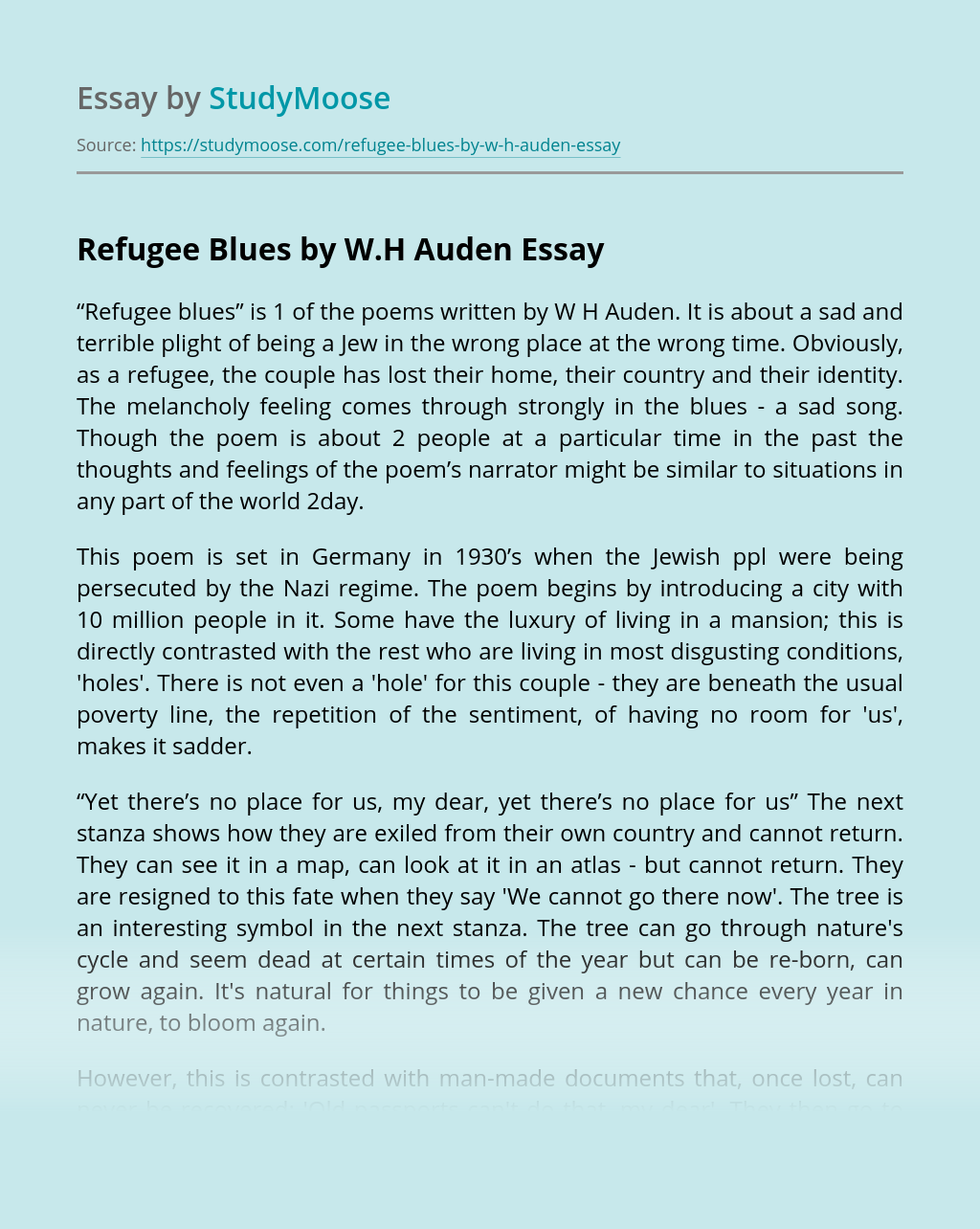 Turn in your highest-quality paper
Get a qualified writer to help you with
“ Refugee Blues by W.H Auden ”
Get high-quality paper
Helping students since 2015
Stay Safe, Stay Original