Perfume by Patrick Süskind, exposed me to a series of literary texts, themes and ideas. It also opened me to a variety of cultural developments that happened throughout the book.

In the slums of 18th century Paris, Jean-Baptiste Grenouille is born, with the gift of scent. As he grows up he lives to decipher the smells of Paris. He journeys to satisfy his obsessions with capturing odors, and it’s this that drives him to a murdering quest to create the ultimate perfume and in the process present his-self with a scent of his own.

Turn in your highest-quality paper
Get a qualified writer to help you with
“ Reflective Statement: Perfume ”
Get high-quality paper
NEW! AI matching with writer

Through the interactive oral I gained a better understanding of the historical context and Parisian lifestyle. When reading I had superficial knowledge and I never really analyzed the periodical moment that the book was set in. The presentation helped me broaden my understanding of the French lifestyle by explaining the streets of Paris and the lack of sanitation. I now understand the importance of where Grenouille was born and the significance it holds.

The fact that the author chose to set the book in that time period, where Paris was at its filthiest, and decided that the main character shall be born with the gift of scent, in the filthiest place of an already filthy city. This fact gave me an interpretation of the author’s choice in location.

It was also through this interactive oral that I got a stronger grasp of the connections between Grenouille and the other gifted abominables that were mentioned in the beginning of the novel.

When initially reading the book, I had briefly gone through those characters, but I never took the meaning of Süskind including them in the novel. It was through the interactive oral that I made the vital connections between Grenouille and Napoleon, Marquis de Sade and the others that were mention as well. These historical figures were also known for their terrible acts against humanity, and their psychopathic personalities.

As the group described each and every one of these “gifted abominables” I was thoroughly interested because I was surprised by some of the horrific things some of them had done. The figure that had me at the edge of my seat was Marquis de Sade; he’s personality and lifestyle as disgusting as it was, interested me a lot and I realized I got the same reaction from him, as I did from Grenouille.

This was when I became aware of what the author was trying to accomplish. It further strengthens my opinion on how Süskind antagonized, Grenouille from the beginning; because before we even knew him, he was already compared to one of those horrific figures from history. I believe what he was trying to accomplish was inserting an uneasy feeling towards any reader, and in my case it worked.

I feel as if this interactive oral gave me a simple but direct understanding of the cultural context, by explaining 18th century Paris with all its filth. It also gave me a better grasp of the author’s choice of location and connections. Now I get the point of Süskind including those historical figures, to connect them with Grenouille even before you know why he’s being compared to them. It all gets laced together with a deeper understanding and with clear examples. Overall I felt as if this interactive oral helped me immensely with the understanding of perfume. [Word Count: 574] 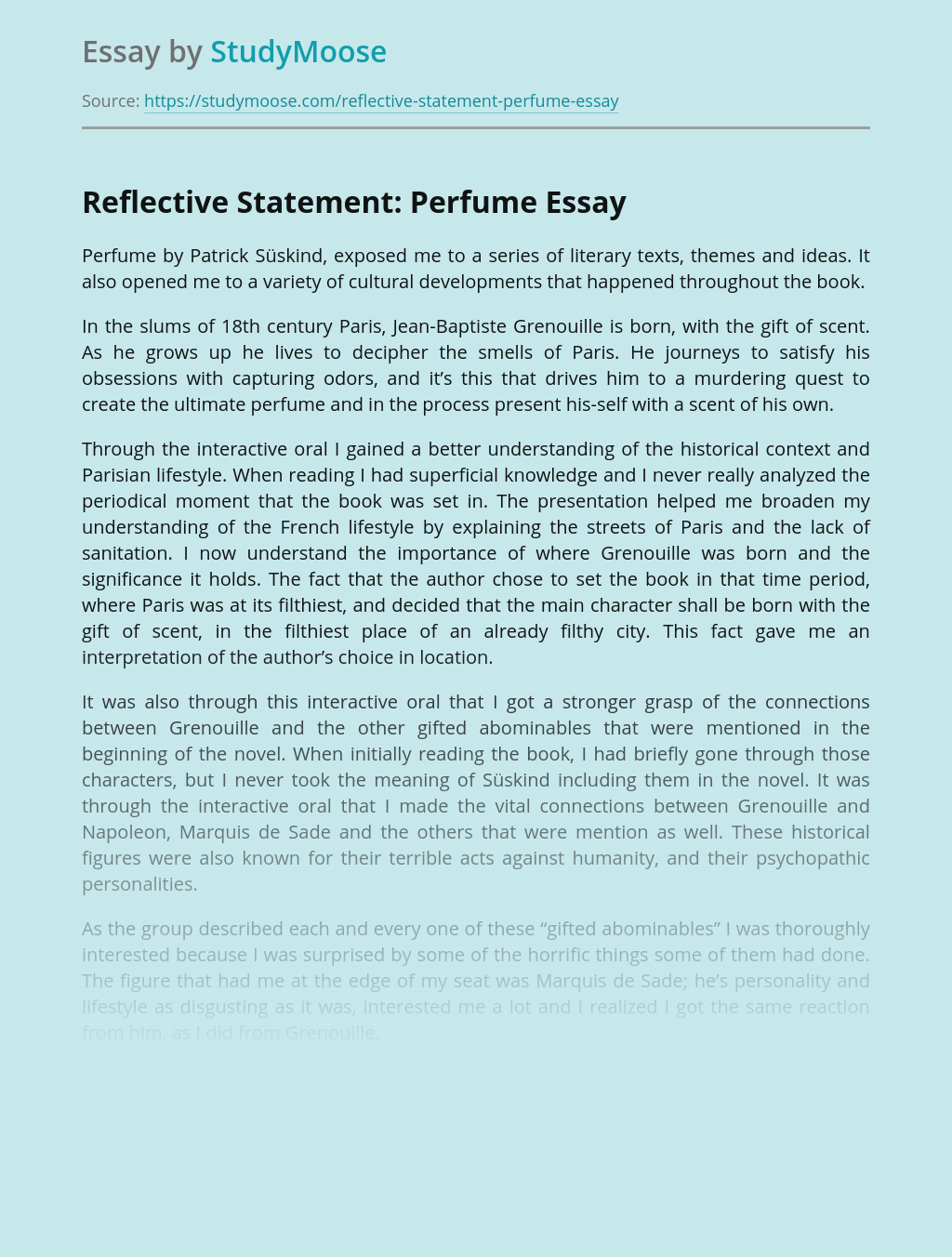 Turn in your highest-quality paper
Get a qualified writer to help you with
“ Reflective Statement: Perfume ”
Get high-quality paper
Helping students since 2015
Stay Safe, Stay Original