Recruitment and selection forms a core part of the central activities underlying human resource management: namely, the acquisition, development and reward of workers. Bratton and Gold (2007, p 239) differentiate the two terms: recruitment and selection while establishing a clear link between them in the following way: ‘Recruitment is the process of generating a pool of capable people to apply for employment to an organisation. Selection is the process by which managers and others use specific instruments to choose from a pool of applicants a person or persons more likely to succeed in the job(s), given management goals and legal requirements.

Turn in your highest-quality paper
Get a qualified writer to help you with
“ Reflective Account ”
Get high-quality paper
NEW! AI matching with writers

’ In setting out a similar distinction in which recruitment activities provide a pool of people eligible for selection, Foot and Hook (2005, p 63) suggest that: ‘although the two functions are closely connected, each requires a separate range of skills and expertise, and may in practice be fulfilled by different staff members.

The recruitment activity, I believe should solely be confined to HR.

This is when they put out adverts and generate a list of people to respond to that advert. In my opinion, the selection decision may be outsourced to the senior team and the interviews by the service managers. It makes sense, therefore, to treat each activity separately. The acquisition of new staff is traditionally usually done by the human resources team in the organisation that I work for. However, through discussions with the senior team, managers of services are slowly being recognised as having the skills to select staff at interviews.

It as with this in mind that I was selected to go and conduct interviews with another service manager. The services I was interviewing for were the services that the other manager runs, not the services that I run. On our way to the interview centre myself and my co service manager discussed what she was looking for in terms of people specifications. I believe this was a very important discussion because we had to ensure we select only the staffs that were suitable for the clients that we needed them for. We had not been involved in the selection of the candidates so we also read and discussed the profiles of the people we were going to interview.

During the interview we had a series of questions that have been set up by the company that we should ask each individual. I had looked at the questions in advance so as to familiarise myself with the questions. I believe the set questions gave our interview some structure. Working to a structure is a major step towards improving the quality of interviewing, as it helps to ensure that nothing significant has been missed, keep track of how the interview time is being used, give candidates a sense of progress through the interview and help ensure consistency between candidates.

As the interviewee will be talking for the majority of the time it was vital that I as interviewer actively listened. The candidate were providing a lot of information and I as the interviewer had to be able to recall it, use it, relate it to the key skill areas and check it for inconsistencies. Reflective questions were used to pick up on a point the candidate had made and enable me to probe further and find out how much the candidate knew on the key skills that we were looking for. I made it a point to probe further when candidates mentioned about key words like choice, dignity and person centred planning.

I maintained eye contact and made sure I concentrated on what the candidate is saying, looked at the candidate and ensured that my physical position reflected my interest. It is vital that all the panel members listen carefully to every answer, even though they may not have asked the question. Examples of effective non-verbal responses that we adopted as interviewers included nodding of the head, smiling and occasional noises of encouragement. Actions to be avoided are looking at your watch, critical frowning, staring out of the window. Care should was taken by panel members that non-verbal signals are not communicated between them, indicating what they feel about the candidate. Interrupting a candidate can be interpreted as discourteous and showing a lack of interest in what the candidate is saying. However it was necessary to do so if the candidate has misunderstood the question.

In order to get the best out of the candidates, as interviewers we had to have good active listening which involves: identifying feelings and intentions behind words, probing answers with further questions, clarifying and summarising and evaluating the quality of the answers. We had however to balance this with being empathetic, so as to lead the candidate to speak freely and could well reveal information that he/she would not do if an interviewer was being overbearing or critical. Silence is one of the most effective probing devices. When used at the appropriate time, it encourages candidates to elaborate their answer. In short – we had to listen to: what is being said; how it is being said; what is not being said.

During the interviews, I also found I was also looking at each candidate’s body language Candidates send messages non-verbally which can reveal their emotional state and are well worthwhile being noted by the panel. Non-verbal communication has an enormous impact on the understanding of the messages sent by the interviewee in any interview. Non-verbal messages are much less likely to be under conscious control and are therefore harder to disguise. They are often difficult to interpret and care needs to be taken in analysing such messages e.g. a candidate may fold arms as he/she is cold, not necessarily because he/she is being defensive. 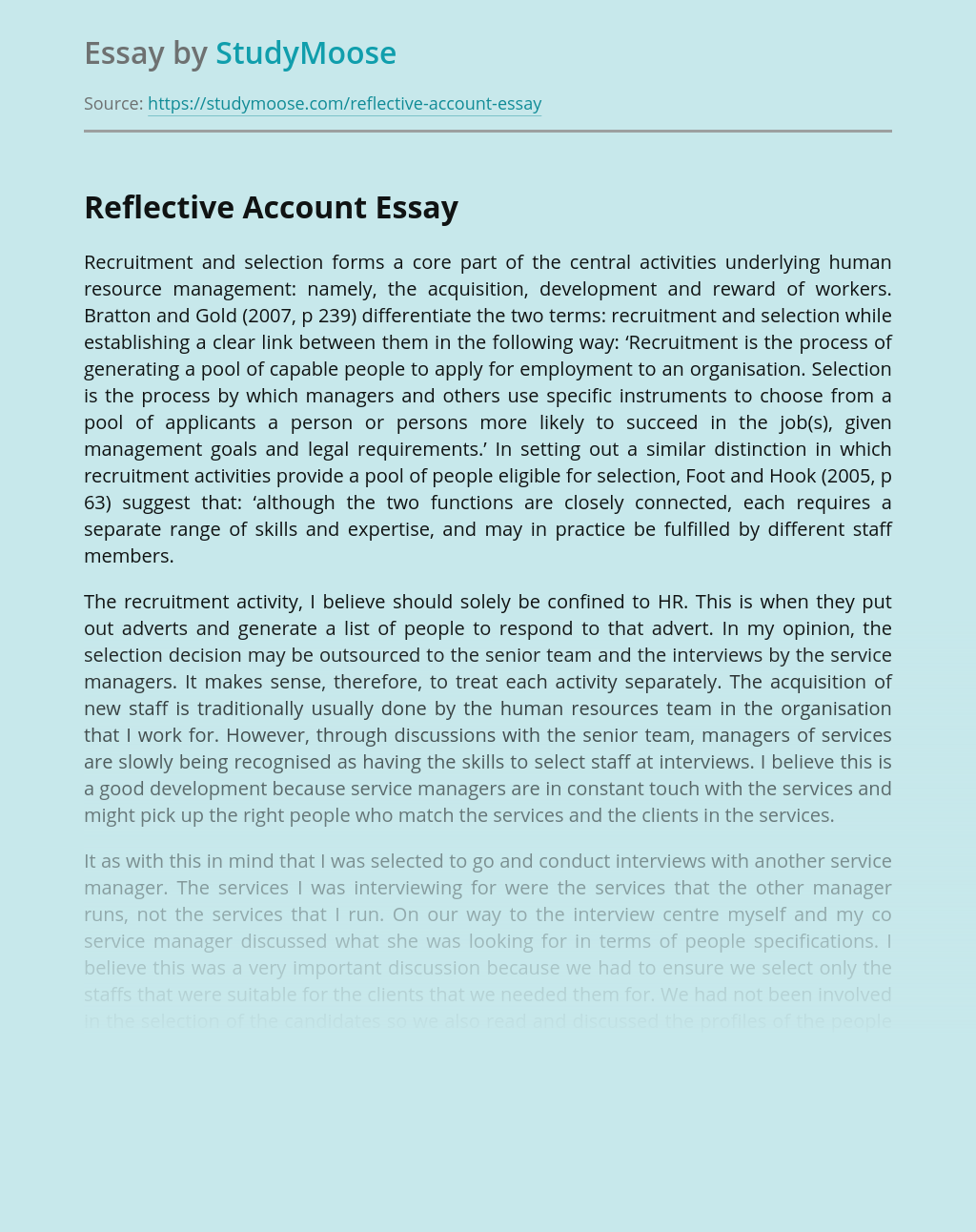 Turn in your highest-quality paper
Get a qualified writer to help you with
“ Reflective Account ”
Get high-quality paper
Helping students since 2015
Stay Safe, Stay Original