Reflection On A Lesson Before Dying

A quote by Keri Russel reads, “Sometimes it’s the smallest decisions that can change your life forever.” In a book by Ernest J. Gaines called A Lesson Before Dying reflects on a school teacher named Grant, who has to make a choice to help a man on death row, named Jefferson, to make him into a human again, as everybody was calling him a hog and he believed it. Grant changes Jefferson’s life and his own, plus everybody else around the plantation in the process.

Don't use plagiarized sources. Get your custom essay on
“ Reflection On A Lesson Before Dying ”
Get custom paper
NEW! smart matching with writer

The choices a person makes an impact on our lives and the lives of others, and we learned this in the book by Grant changing Jefferson, and how he doing that changes the whole town, which causes some friendships that may not have happened before. With Grant turing Jefferson into a man again he turns his own life around. In this book, Grant chose to help Jefferson become a man again, and with many struggles to get there, but by the end, Jefferson turned out to be the strongest man in the execution room in the day he was killed.

In A Lesson Before Dying by Ernest J. Gaines, Grant Wiggins chose to go back to Jefferson and teaching him how to not be following what everybody thought about him and to defy all odds and that is important because it changed the life of everybody in a fictional city of Bayonne, Louisiana.

In A Lesson Before Dying we learned that as Grant kept going back to visit Jefferson, even after he was not really forced to go any more by his aunt Tante Lou, he kept going back, even after Jefferson was cold, harsh, and acted like a hog around Grant for the first half of the book.

Grant kept going back because as time went on, he saw himself in Jefferson, he saw the struggling soul and knew he should help, even if it changes his life. This impacts the novel because we as readers see evolution, we see Jefferson believing when everybody called him a hog, he really believed it, which a reader can see as bullying and falling to other peoples standards if you look different, or if you do something different than the other person, and it still is a struggle going on nowadays. We see Grant change when he gets closer to Jefferson as Grant stands up for himself more, and fights for the people he loves and cares about towards the end of the novel. We see the whole setting of the novel changes from how the main characters’ relationship changes within one another. Vivian and Grant have a huge fight, and with that made them stronger, we see Jefferson from being a depressed man who has nothing to live for fight for his rights and stand tall in his last days. The whole aurora of the book changes by no more fights, deep conversations between Grant and Jefferson that changed Jefferson’s whole perception of life, “I cry, not from reaching any conclusion by reasoning, but because, lowly as I am, I am still part of the whole. Is that what he was thinking as he looked at me crying.” Jefferson in the beginning was on his hands and knees eating his food like a hog because he thought he was one, and that went to him emotionally fighting for his family “When Vincent asked him if he had any last words, he looked at the preacher and said ‘Tell Nanan I walked.’And straight he walked.”

I remember around two years ago when my best friend Jacki moved to Idaho, she took it really hard, and I did too, but over the span of a few months we made it work, she is still my best friend to this day, even if it is hard to be friends sometimes considering she lives so far away. It would have been easy to just walk away and stop talking to her, but I did not, I could not, something kept us still talking, we keep each other moving and motivated for the next best thing. I chose to keep her close and still make plans with each other to visit each other in the summertime. This kind of got me thinking about the relationship between Jefferson and Grant, Grant could have stopped seeing Jefferson, if anything it would have been easier on him and his relationships with other people, but Grant did not stop, he wanted to do the right thing. Grant stayed by Jefferson’s side even when the going got rough, he was still there, he and Jefferson made each other better when they both needed each other. Jefferson is on the death sentence, and Grant is a school teacher. It was hard for both of them to get along at first, but once they did I imagine they could not imagine their lives without each other. When Grant finally lets himself cry at the end of the book it symbolized on how much Grant really cared, even if it was hard. Jacki and I still talk every day and we are still very involved in each others lives, even 1700.4 miles away from each other, and I feel like with the Grant and Jefferson relationship even after Jefferson died Grant still relies on him, still sees him there. By being there for somebody you care about, it can really change you, even if it is hard to be there for people some days, but at the same time, you could not imagine your life without them.

In conclusion, A Lesson Before Dying by Ernest J. Gaines reflects on how Grant chose to help Jefferson by teaching him the fundamentals of life, and even in your last days you can defy all odds and go against everybody’s opinions on yourself. We care about this topic because even today there is racism and segregation, yes, people are not on the death sentence anymore but there are still a lot of false convictions and people being murdered for false reasoning. For this we need to stand together as a group and defy all the odds to beat the standard of life we see today, we need to work together as one to make the world a better place, and we still have tendencies to not do this, this book was based in the nineteen-forties and still, we see some of the same themes we see in today’s society. It takes one person to change other people, which we learned in A Lesson Before Dying, Grant changed Jefferson’s life by teaching him how to make a difference, and we need to learn this to this day. We need more people like Jefferson and Grant in this world to change it. One person can make a difference, “Sometimes it’s the smallest decisions that can change your life forever.”

Reflection On A Lesson Before Dying. (2020, Oct 01). Retrieved from http://studymoose.com/reflection-on-a-lesson-before-dying-essay 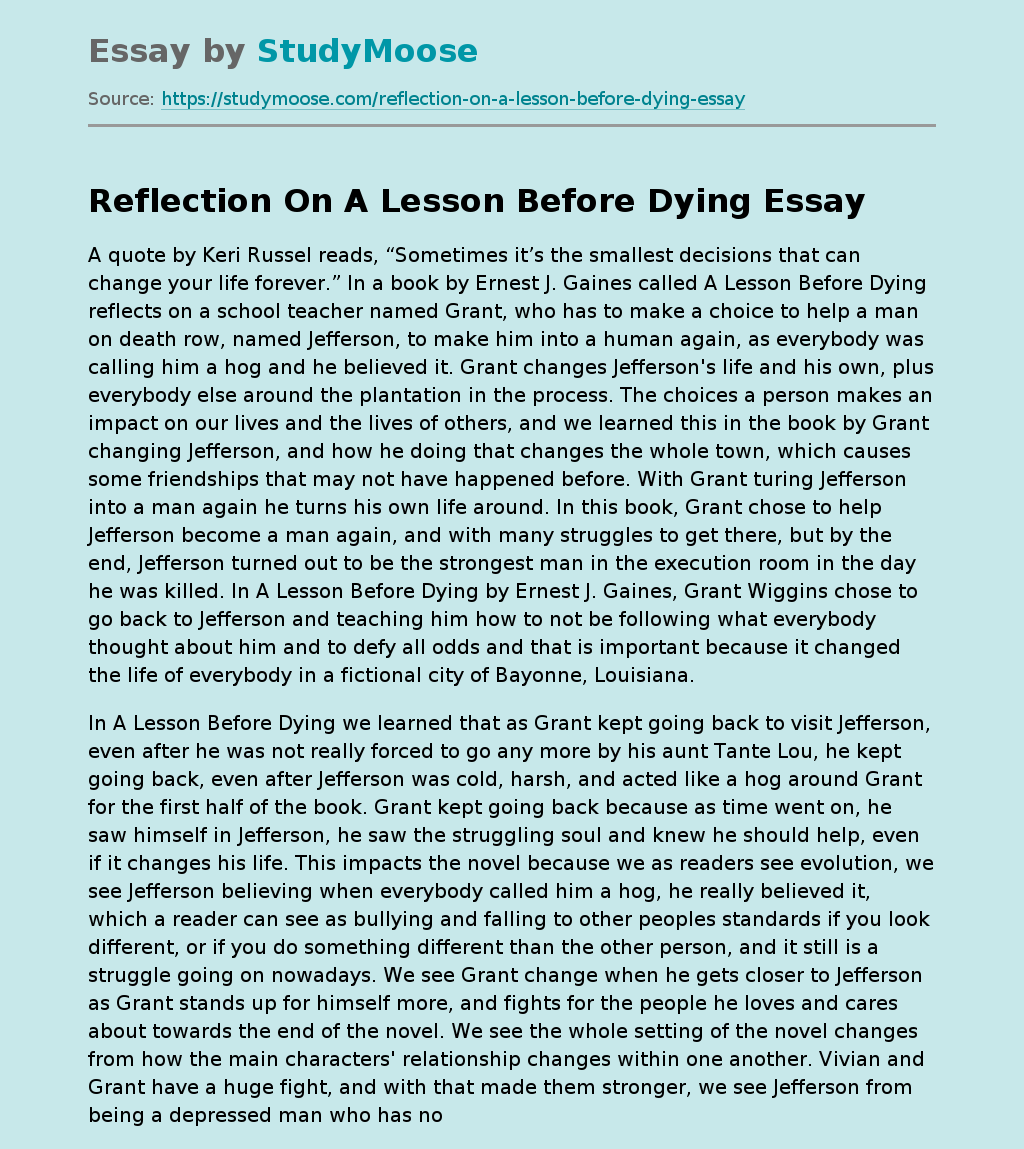