The Country Wife is a Restoration comedy, concerned with exposing certain faults and failings in polite society but as R. C. Sharma said ‘The Restoration comedy of manners thus reflects not the real life of the upper class fashionable society but the quintessence of its spirit and temper. ‘ The play is also a satire; a play in which prevailing vices or follies are held up for ridicule, with characters within the play being targets for Wycherley’s play. One such target is female hypocrisy.

Don't use plagiarized sources. Get your custom essay on
“ Reflect Restoration society ”
Get custom paper
NEW! smart matching with writer

Horner’s friend, Quack, who has spread the story around town that Horner is an eunuch, finds it difficult to understand how the story will benefit Horner. The latter explains. A man, in his position, has a problem in knowing which women would be interested in an affair and which would not: ‘But now I can be sure she that shows aversion to me love the sport. ‘ As he goes on, his plot will provide a screen for those women who are interested, because they are worried only about protecting their ‘reputations, not their persons’ from the breath of scandal.

This revelation prepares us for the possibility that the women in the play will prove Horner right. If they do, then clearly his cynical assessment will have established their hypocrisy. Lady Fidget behaves exactly as Horner has predicted. Horner enjoys the pleasure of being right about these women in more sense than one. This is where satire comes into the picture. It is Wycherley who makes use of Horner in order to show the double standards by which the women of the age lived.

This satire is not directed against Alithea or Margery. Margery’s naivete underlines the hypocrisy of Lady Fidget and all her friends. Another target of Wycherley’s satire are the characters of Pinchwife, Sparkish and Sir Jasper. Pinchwife, on the one hand can be seen as a husband desperately trying to maintain his wife’s virtue in the face of the malignancy of city life, but on the other hand, he is so mean and suspicious that his wife’s eventual adultery is not surprising and is seen as just punishment.

Pinchwife’s attitude towards everyone in the play is negative. He disapproves of his sister Alithea’s way of seeing people and being seen in London and tries to suggest she is immoral for talking to Margery about the attractions of London life, ‘what would you have her as impudent as yourself, as arrant a jill-flirt, a gadder, a magpie and – to say all – a mere notorious town-woman?

‘ He is negative also towards Sparkish, as he regards him as a fool and urges him repeatedly to deny Harcourt access to Alithea ‘If you are not concerned for the honour of a wife, I am for that of a sister; he shall not debauch her… is this your town wit and conduct? ‘ Thus everything about Pinchwife is negative. He is the perfect target for satirising because as R. C Sharma says ‘by his excessive and mean jealousy of his wife, whom he unmodishly treats as ‘a freehold’ he loses the sympathy of everybody and his humiliation, therefore, is purely comic. ‘ 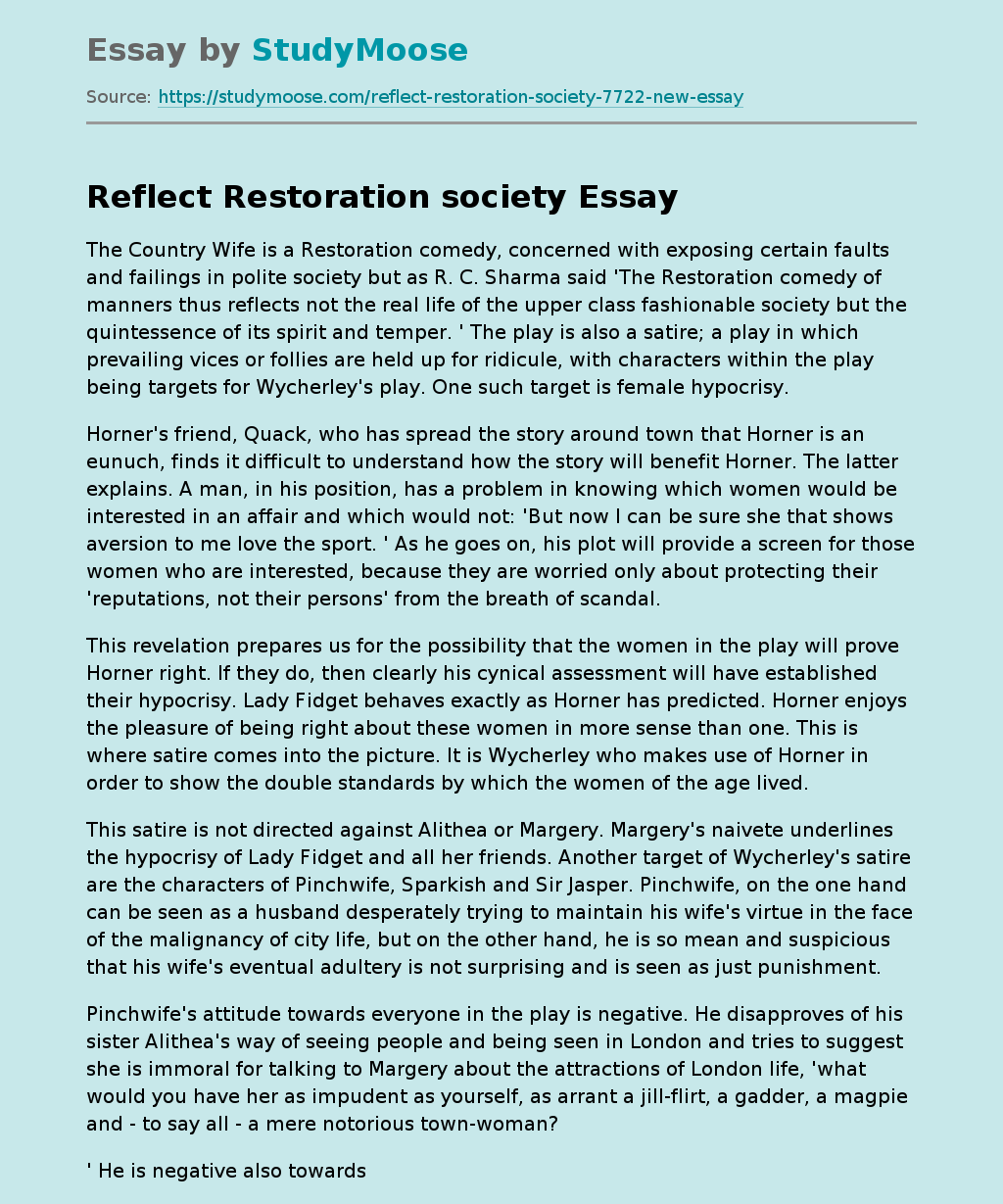