References to Blood in The Play

One of the first most noted references to blood in Macbeth was when Macbeth got the knowledge that his murderers had killed Banquo “Avaunt, and quit my sight! Let the earth hide thee. Thy bones are marrowless; thy blood is cold” (3.4.114-115). It basically means that it’s Macbeth’s fault for the death of Banquo and now when he continues to kill it haunts him.

Another one of the references to blood is that when Lady Macbeth was sleepwalking and starts to wash her hands.

Don't use plagiarized sources. Get your custom essay on
“ References to Blood in The Play ”
Get custom paper
NEW! smart matching with writer

Later in the story this leads to the death of Lady Macbeth after being so guilty of the killing of Duncan. “Yet who would have thought the old man to have had so much blood in him” (5.1.41-42).

Also in the book when Macbeth finally killed Duncan, Lady Macbeth tells him to clean the blood off his hands basically saying, you killed him and nobody will find out and to relax. “Go get some water.

For Macbeth it means that there more he kills and more blood there is, the more power he gets and more crazy he gets. Each kill he collects, the more he greeds for control. For Lady Macbeth blood represents her guilt for the death of Duncan and later on in the scenes she was pretending to wash her hands to “get rid of the blood on her hands.” But this blood is her downfall as she commits suicide because her for guilt of the whole thing.

Theme – The greed for power because of the ambition of wanting to control more. It all started because of the witches telling that he would become king “All hail, Macbeth, that shalt be king hereafter” (1.3.53). When that all began it, Macbeth could have ended it by killing Duncan and claiming king, but he decides he wants more. Then when he finally claims what’s his, there are potential threats that could impact him from keeping the position he’s in. First is Fleance, when he said he was going to become king and everyone else down his family will become king. “Thou shalt get kings, through thou be none” (1.3.70). Then it was Banquo, “Thou hast it now–king, Cawdor, Glamis, all. As the Weird Women promised, and I fear. Thou played’st most foully for ‘t” (3.1.1-3). Lastly the last threat was Macduff, so since he had fled to Malcolm the only way Macbeth could get him back for that was for him to kill his whole family in the kingdom, “The castle of Macduff I will surprise, Seize upon Fife, give to th’ edge o’ th’ sword. His wife, his babes, and all unfortunate souls. That trace him in his line” (4.1.171-173). Since he felt threatened by those three he decides to remove them entirely to have nothing that opposes him.

In the entire play it shows that power corrupts the mind and our actions and can totally change a persons personality in seconds. Also in the beginning, Macbeth was a very likeable character and was a very trusted Noble to King Duncan but in the end of the book it turns into a complete disaster. Early in the book he gets a prophecy that he is sticking close to this whole story, because when he becomes Thane of Cawdor his whole mindset is that he needs to go for king because it’s a most likely chance of him obtaining it, “All hail, Macbeth! Hail to thee, Thane of Cawdor” (1.3.52). When he controls the throne he loses all of his morals to almost everyone. His greed for power was so immense that he couldn’t care less that he was killing Fleance, which was still a young boy.

References to Blood in The Play. (2021, Oct 12). Retrieved from http://studymoose.com/references-to-blood-in-the-play-essay 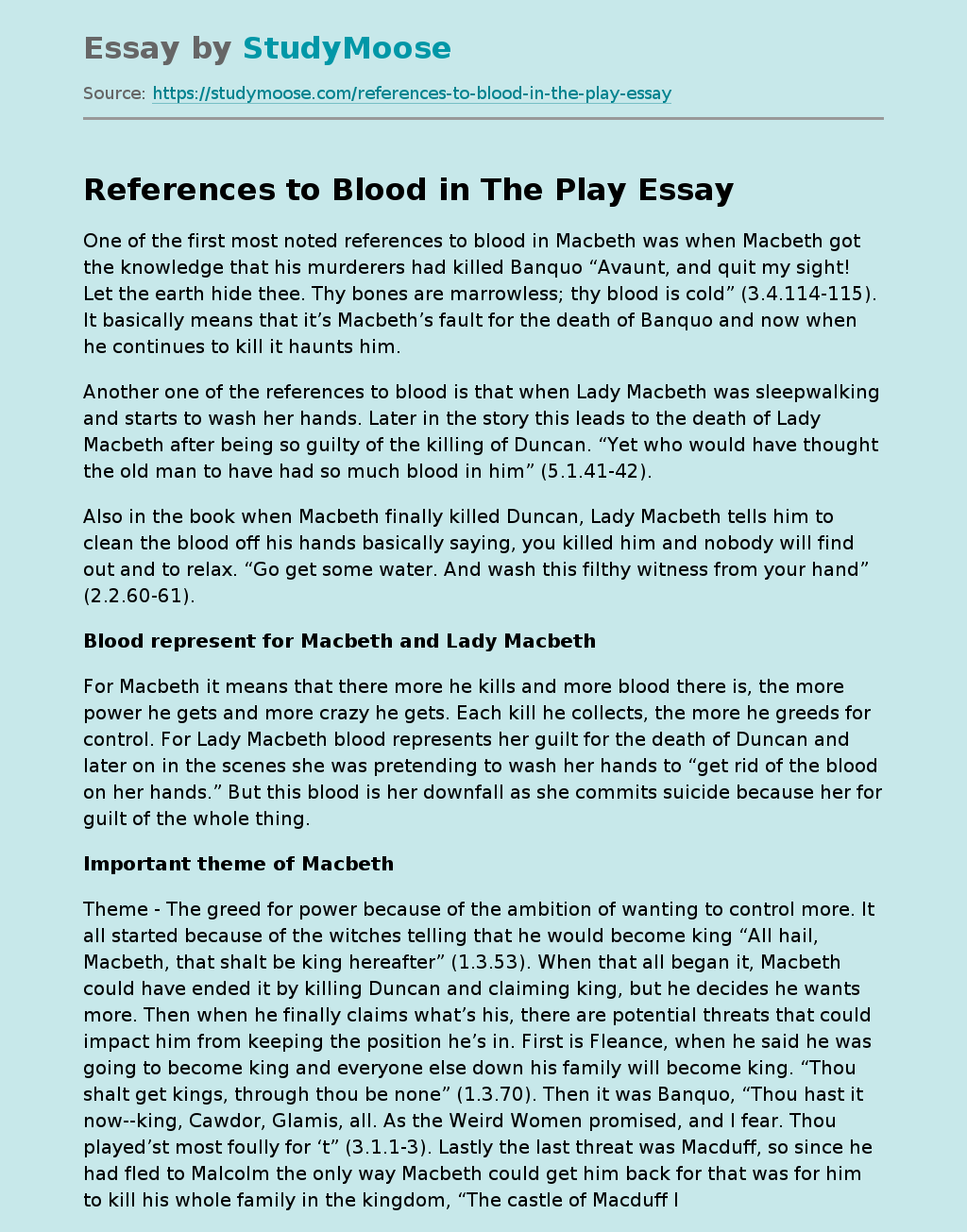