The overall message carried in Wole Soyinka’s poem “Telephone Conversation” is the fact that blacks are treated with unbelievable ignorance. I believe that Soyinka conveys this message very effectively through the use of form, style and poetic techniques.

The form of “Telephone Conversation” seems to almost represent a dramatic monologue. This is quite ironic because there are actually two people speaking. Perhaps by giving the poem this form, Soyinka is trying to suggest that the African man feels like he’s talking to himself, since the landlady is almost ignoring what he says.

Don't use plagiarized sources. Get your custom essay on
“ With reference to “The Telephone Call” and “Telephone Conversation” discuss and compare the effectiveness of the poet’s style ”
Get custom paper
NEW! smart matching with writer

I believe the continuous form of the poem can reflect the continuing ignorance of white people towards black people.

Soyinka’s style exposes racism in a fairly critical, yet humorous way. This is clearly shown with the comical line of “You mean – like plain or milk chocolate?” When reading this for the first time, we are amused by this comparison; however, working on a different level, we can appreciate the critical sarcasm that Soyinka conveys towards the ignorance of the white landlady.

Soyinka’s humorous sarcasm is also seen when the man says “West African sepia” and “Down in my passport.” The landlady is then described as having a “Silence for spectroscopic flight of fancy”. This is quite critical and mocking the landlady because we realize that she tries to imagine what color “West African sepia” is, without realizing the sarcasm of the man’s words.

Soyinka’s effective use of metaphors and similes can be seen when the man compares his color to shades of hair color “Like brunette” and the palms of his hands and the soles of his feet to “peroxide blond.

” This is, of course, critical because the man almost degrades the landlady by resorting to a comparison of his color with basic hair color. Soyinka then goes on to show the man’s frustration by a sarcastic comment “turned my bottom raven black”, which is made ironically polite by a preceding addressing of the landlady as “madam”. In this example, the criticism can be thought of from two different points of view. The man could be degrading the landlady with his wit, or the landlady could be degrading the African man with her ignorance, forcing him to make the sarcastic comments.

Soyinka also provides irony to her message. Throughout the poem, the African man has proved to be much more sophisticated and well-spoken than the white landlady. Soyinka uses contrasts to show that the landlady is rather shallow and less witty than the African man. The landlady is first described as having “pressurized good-breeding” , as is stereotypically expected of whites, however she later shows her true self when she says things like THAT’S DARK, ISN’T IT?” and “DON’T KNOW WHAT THAT IS”. Through these quotes, Soyinka shows the full extent of the white landlady’s stupidity.

Fleur Adcock’s poem “The Telephone Call”, in my opinion, can carry two messages. One could be that experiences shouldn’t be tempered with and the other could deal with disappointment as a result of deceivement.

I can’t say that Adcock uses style, form or poetic techniques as effectively as Soyinka in order to convey her message, simply because Adcock hardly uses any at all.

Although “The Telephone Call” appears to be a poem visually, with its clearly visible stanzas, the text reminds me of a simple, colloquial dialogue acoustically. Adcock’s poem lacks poetic techniques (except for a single simile “like a flying saucer”), and appears to be very literal, unlike Soyinka’s poem, which tends to work on two different levels of interpretation.

Adcock does, however, convey her message even through the sheer simplicity of the ending “And the line went dead”. This quote can reflect the death of joyous feelings. The ending seems to be such an incredible anti-climax that it almost, in a sense, becomes a climax. Through this ending, Adcock conveys her message very effectively. The power of the anti-climax ending shows the reader Adcock’s message of the fact that experiences shouldn’t be tempered with, by making the reader experience the extreme disappointment of the ending, thus making the reader realize how disappointed the woman in the poem was to find out that it was all a scam.

Adcock mocks companies that invent rather pathetic marketing names by calling the prize an “Ultra-super Global Special”. This sounds very exaggerated and appears to be a bit of a mouthful to the reader. Through this quote, Adcock conveys her message by mocking the people who bring about such disappointment with artificial experiences.

If I was to look at only Soyinka’s poem, I would definitely agree that she has conveyed her message to the reader effectively through form, style and poetic techniques. However, I feel that it is rather unfair to compare it to Adcock’s poem, which is made uniquely effective through the absence of the techniques altogether. Adcock’s poem is extremely effective in its own right, due to the detached view, colloquial style and big understatements. I think that Adcock is more skilled in conveying her message, because it seems harder to do it without form, style and poetic techniques.

With reference to "The Telephone Call" and "Telephone Conversation" discuss and compare the effectiveness of the poet's style. (2020, Jun 02). Retrieved from https://studymoose.com/reference-telephone-call-telephone-conversation-discuss-compare-effectiveness-poets-style-new-essay 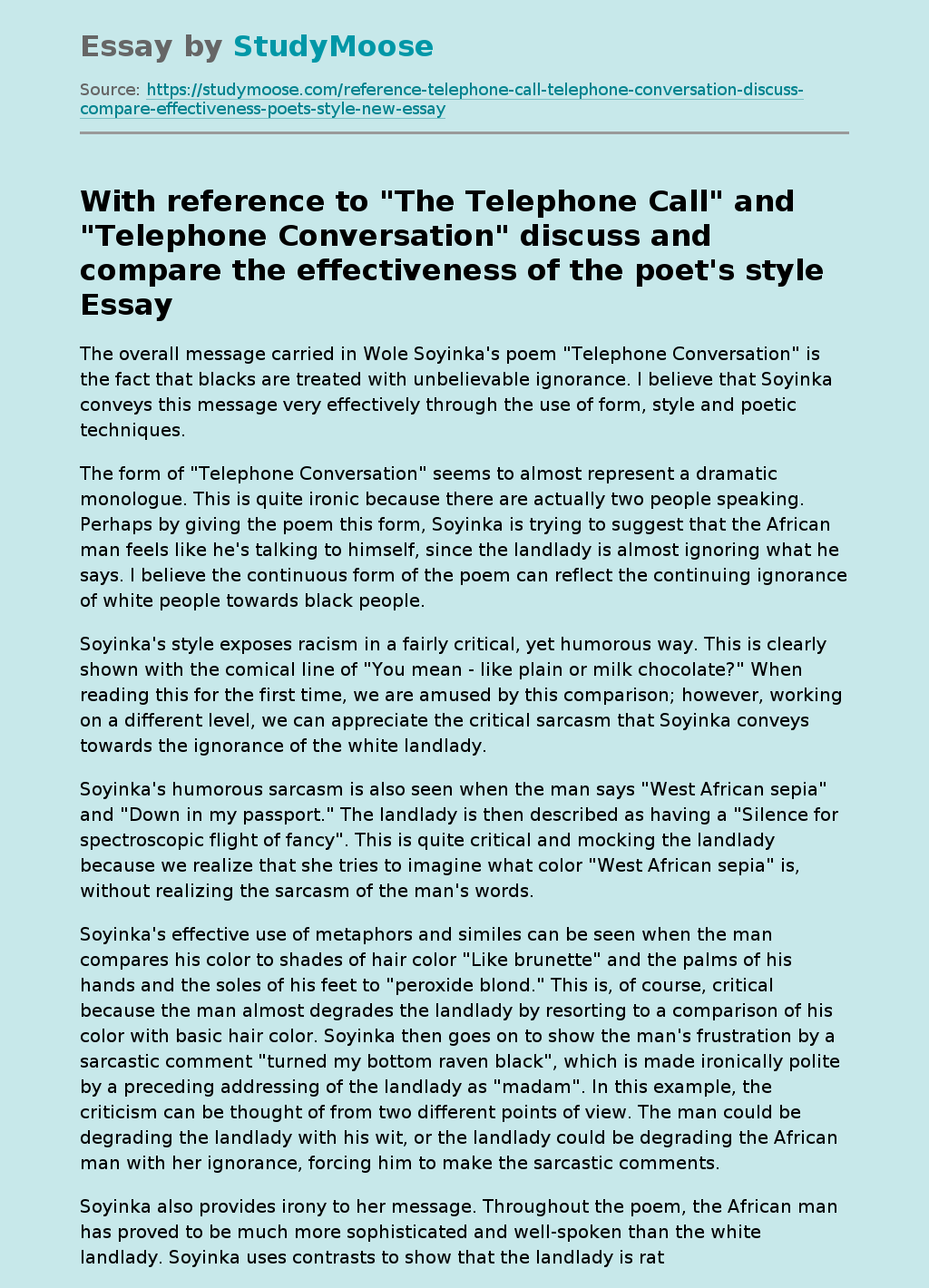