This essay is discussing the dramatic play of Romeo & Juliet, where true love turns into a great tragedy because of a family feud. The author of the play is William Shakespeare and in Act 3 Scene 5 he showed great tension & suspense leaving the audience at the edge of their seats, whether it was a 16th century day audience (when the play was written) or a modern day audience. This key scene is very important because this is where Romeo & Juliet spend few hours together & where they first make love; this is also their first & last night together.

Don't use plagiarized sources. Get your custom essay on
“ Reference to Juliet an her relationship with other characters in Act 3 Scene 5 ”
Get custom paper
NEW! smart matching with writer

In the beginning of this scene, Romeo & Juliet are very sexual & intimate they both are very playful and act very naï¿½ve like it seems they are so surrounded in their love that have forgotten that Romeo has been banished. For example Juliet says “Therefore stay yet: thou need’st not be gone”. Juliet says this in a very playful voice & it’s like she really thinks it can last forever.

Then Romeo goes on to say “Let me be ta`en, let me be put to death. I am content, so thou wit have it so” This is something that is very serious. But he says it so freely like its nothing but it does allow Juliet to come to her senses & this were the lovely world of happiness comes to a halt & the seriousness of the matter is recognised.

The tension is really built up here because the nurse has just came in & told Juliet that her mother is coming.

It is also quite ironic that Romeo says “Come death, and welcome. Juliet wills it so” because he is basically saying I will die for Juliet, & later on he does actually die for her. Even before you reach the end you know they are going to die because of what it says in the prologue; “A pair of star-crossed lovers take their life: Whose misadventure piteous overthrows,” Shakespeare seems to leave little reminders throughout the play. This is rather ironic because the audience realise this very soon in the play but the characters never seem to realise that their horrible fate is soon to come.

When Juliet’s mother first walks in, the audience can get to see how weak the relationship between Juliet & her mother is. For example, if they were close the secret of Juliet & Romeo would be between her & her mother. You can also tell how in control Juliet is of her emotions that she doesn’t give it away about her and Romeo (although she is in great pain & probably wants to burst because of the pain). “Evermore weeping for your cousin’s death” you would expect Juliet’s response to that would be yes but Shakespeare uses this to be very clever. When Juliet says ” Yet let me weep for such a feeling lost” To the mother, Juliet is weeping for her cousin but to the audience she is weeping for Romeo because he is gone & she doesn’t know if she will ever see him again. When Juliet hears of the bad news that she has to marry Paris, she still acts quite in control but the audience can see that it’s ripping her apart. The climax is really starting to build up & you can almost see her death. Juliet previously said how she would like to kill Romeo with a poison & how much she hates him so as not to give the game away. Lady Capulet has just told Juliet that she will be marring Paris. And then Juliet says “I will not marry yet.

And when I do, I swear It shall be Romeo, whom you know I hate, Rather than Paris” This rather shocking response to Juliet’s mother. Her mother is visibly very angry with what she has just said because she seems to be quite jealous of Juliet & thinks she is being rather ungrateful. Lady Capulet would have loved to marry a young handsome gentleman like Paris so to her it is also quite confusing why Juliet didn’t jump for joy. However Lady Capulet & Juliet see love as very different things. Lady Capulet looks for wealth, looks & if they are gentlemen. On the other hand Juliet looks at love as something from the inside the personality of the man yes looks count but personality is the most important thing. Also Juliet loves Romeo so she can’t go & automatically switch and love Paris just because he is handsome & rich or because her parent wants her to marry him. It just broke her into pieces just thinking of marring Paris

When Lord Capulet enters it is like all the courage and control Juliet once had disappears through her finger tips. She begins to cry uncontrollably and

her father is very pleasant towards her until he finds out that Juliet does not want to marry Paris then he his mood switches to the complete opposite andhe explodes like a volcano. Although it did take him a while to realise that Juliet is not happy with the arrangement “Soft. Take me with you, take me with you wife” But once Juliet says “not proud that you have but thankful that you have. Proud can I never be of what I hate, But thankful even for hate that is meant help” The father can’t handle it and explodes & then the abuse begins “How, how, how, how? Chopped logic? What is this?” When he says this he is spitting with anger. As far as he is concerned her opinion doesn’t count, and he doesn’t even mind dragging her down the aisle. The brutal language that he uses on her begins to make you really think if he really loves her or just sees her as an object. Although the majority of a 16th century audience would be on the father’s side and agree with him but on the other hand the 16th century audience had followed up with Juliet & might feel sorry for her.

Nevertheless a 20th century audience would be on the Juliet’s side & would feel really sorry and probably wish they could save her in someway. Also a 20th century audience would be extremely angry with what the father is doing but I also think they would be a few who would be on the father’s side. Juliet has been very dependent on the nurse but shockingly this is were the nurse turns & says the most unexpected thing “I think it best you married with the County” Juliet is completely gob smacked by now and seems very lost and confused but she continues listen. “Your first is dead, or ’twere as good he were As living here and you no use of him” I think she has just done the unforgivable thing by saying what she has said but I think she said this to save her own skin, she took the cowardly way out. Although what she said about Romeo may be because she sees love more of a sexual thing. Everything is going wrong for Juliet and everyway she looks there is nobody to help her.

In the play hate and love is shown very differently from each other. For example the nurse and Mercutio see love as a sexual thing but Juliet sees it like finding your true love your partner for life and that it’s not all about sex Romeo was confused about love and didn’t really know what it really meant. He couldn’t see the difference between lust and love until he meant Juliet and his eyes finally opened to what true love is. His lust of Rosaline & really thought he was in love then he meet Juliet and new what really love is. Love that you’re willing to die for. Love that you’re willing to go against all odds. Love that you’re willing to take all types of risks. The hate was very noticeable it was between the two families which later lead to their children’s death. Through the whole story you can sense that time is running out for Romeo & Juliet but you can also sense that fate brought them together and fate is also going to bring there death. Shakespeare shows this throughout the whole story just dropping little clues especially the last few words there say to each over after their night of passion.

Through the whole play Juliet has went from strength to strength & done all she could possibly do to keep her secret & be with her soul mate forever but unfortunately love doesn’t always triumphant and despite all her troubles her Romeo dies which leads to her killing herself. Her strong love fore Romeo helped her accomplished all she has done, even for her to fake her own death & lie to her parents. Only it wasn’t good enough because her love ended up in her killing herself.

Reference to Juliet an her relationship with other characters in Act 3 Scene 5. (2020, Jun 02). Retrieved from http://studymoose.com/reference-juliet-relationship-characters-act-3-scene-5-new-essay 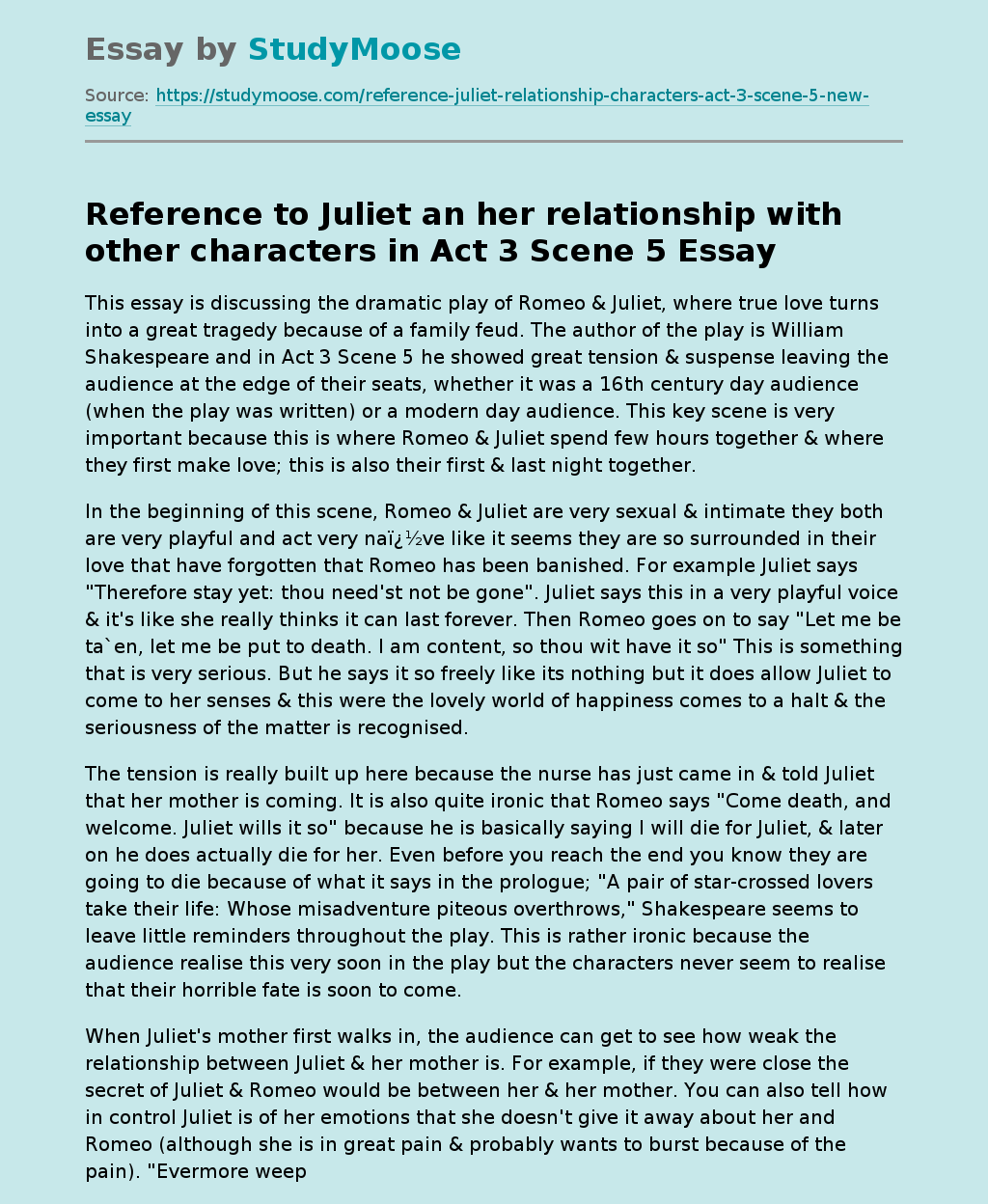