In the first years, Red Lobster’s positioning is “affordable” “fresh” seafood. This positioning last from its start till about 2004. In 2004 after Kim Lopdrup took over as president, he was shocked that consumers put Red Lobster as “low end” places that serving mass-produced, frozen seafood. So he launched a three phased plan to reposition Red Lobster. Phase 1 involved basic operational improvement. Phase 2 is repositioning around “freshness”. Customers had vague understanding of freshness and they thought Red Lobster’s product not fresh mostly because too much fried items on the menu.

Don't use plagiarized sources.
Get Your Custom Essay on Red Lobster Case Study Just from $13,9/Page

This phase played the most important role in Lopdrup’s plan (initiated in 2004), and de-emphasizing all fried items and introducing wood-fire grilling are most effective elements. In these ways, Consumer Needs were satisfied and Company Skills were improved. Phase 3 is re-modeling the restaurants, the target of which is becoming nicer than ordinary casual dining but still approachable. This phase started in 2008, and was supposed to redone all restaurants by 2014. As a results, customer perceptions that Red Lobster “has food that is fresh” had increased significantly according to surveys in 2008.

Everything seemed good at that point. There are something worth notice: the new 2008 ads (as current ads in question 2) followed the same model of 2004 ones, but focus shift from “wood fire grilling” and ”fresh fish” to “new grilling method” and “freshness”. That means they were introducing new category of cooking method and food that not constrained as “seafood”, a shift in product. It’s extension of introducing wood fire grilling to reposition. In 2008, Copernicus Company conduct a study to uncover some psychographic segments, and summarized Red Lobster’s customers into 5 categories: Experientials, Indulgents, Traditionalists, Eclectics and Frugals. Lopdrup was facing a balance between building stronger connection with Experientials and losing part of Indulgent and Frugals.

According to form above, the revenues gained from new Experientials are as twice as the combination of loss from Indulgents and Frugals. Besides that, Experientials consume much more alcohol, which is more profitable than food. Former calculation showed an optimistic result to us, so Lopdrup should make Experientials the target segment. He also should modify Red Lobster’s positioning accordingly, but do it gradually lest go chapter 11 in the process as K-Mart. The scale of modifying can be described by the answer of questions at the end of the case: (questions omitted here) Segmentation:

According to the former paragraph, experientials should represent the new Red Lobster target customer. Positioning:
Red Lobster need to change positioning but not too much. The rise of aquaculture had led to dramatic declines in the cost of seafood, so “approachable seafood” is not as appealing as before. Red Lobster need to find a new positioning, while keeping “fresh” (according to Exhibit 6A, freshness is the most important factor when customers select seafood). Exhibit 6A also showed that customers think cleanliness, quality and taste/preparation are very important, so “tasty fresh seafood” and “best fresh seafood” are all good options. Promotion:

Current ads fit the positioning the marketing team wanted, as the focus was “freshness”. Traditional price promotions should be scaled back, shown in Exhibit 6A price is one of the least concerned factor. Price:

Simply raising prices is not a good idea for Red Lobster. Although Experientials are important, Indulgents and Frugals are large in customer percentage. Using price discrimination can be a good strategy: keep some cheap items in the menu, while introducing more expensive items (including desserts, appetizers and wine). In this way, most patrons can be kept while revenue would raise. Product:

Adding better wine selection is a good idea, since experientials could be attracted in this way while other customers have other options. Broadening the menu further beyond seafood to steal share from other premium casual chains is also feasible, the success of “wood fire grilling” verifies that. Similarly, emphasizing on wine in menu, making some location vary its ambience by time of day are all good idea for the same reason as illustrated before. Place:

To target experientials, re-modeling is necessary. From Exhibit 13, we can know that re-modeling won great appreciation. Most customers would enjoy better atmosphere. Moreover, re-modeling were operated after hours, so business won’t be disturbed. The most important reason is experientials are motivated by Culinary Expertise, sophisticated, upscale atmosphere (shown in Table A, p8 of case). To conclude, all the strategies are to attract experientials without losing other customers. 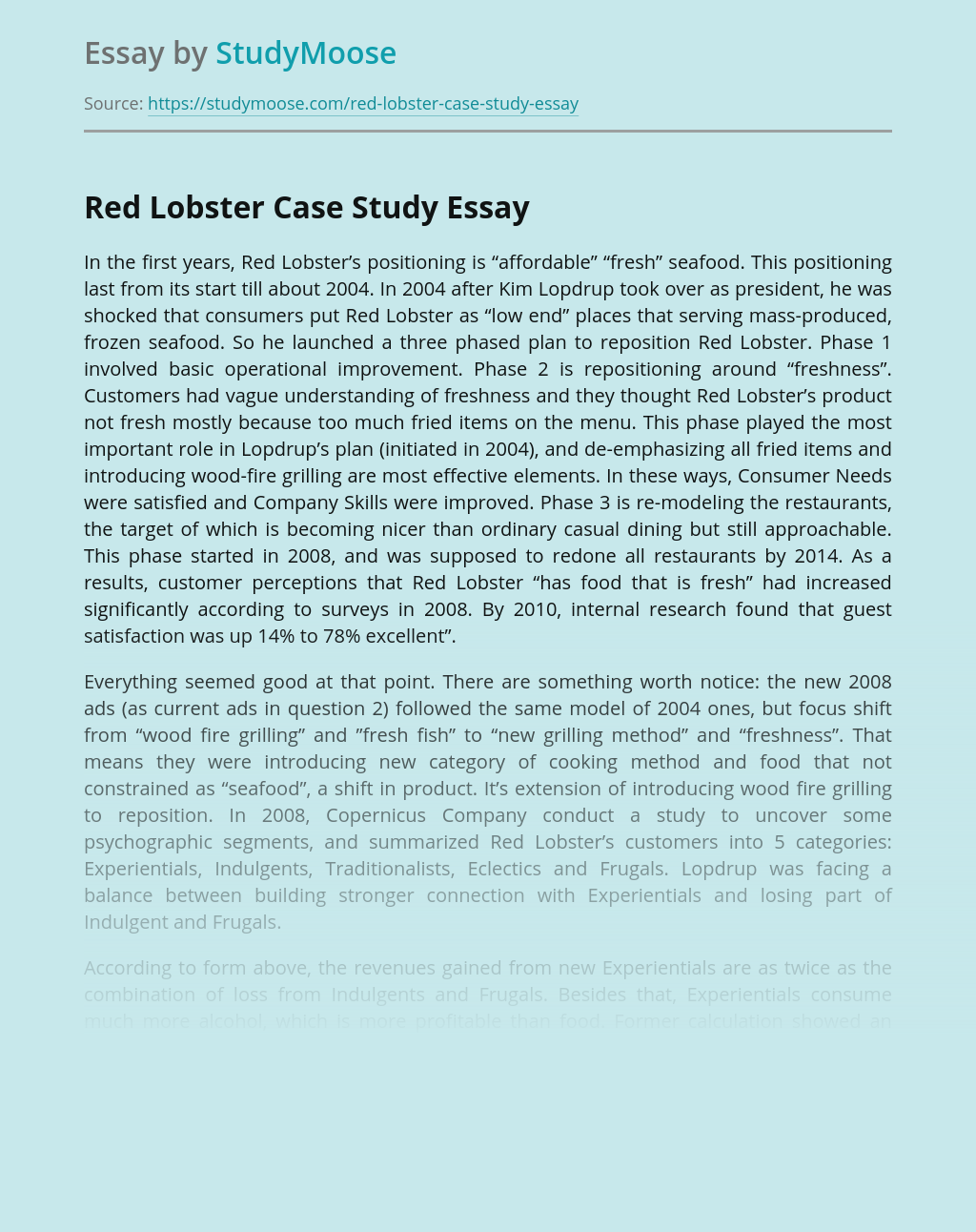 Despite its good performance as recorded by many growth indexes, it as been lagging behind in building necessary infrastructure for achieving the goals required to be attained by a middle-income country. Apart from weak infrastructure and the poor higher education system, Bangladesh has been burdened with an out- dated and inadequate legal mechanism that can...

Alcohol can be very bad for you, especially for teenagers still growing and developing. But, what exactly is Alcohol? Well, Alcohol is a clear drink that is made from grains, fruits, vegetables, or a beverage containing ethyl. It is made when these things are fermented. Fermentation is a process where you use yeast or bacteria...

Get Essay
Too Big to Fail

The term ‘too big to fail’ is the idea that a service has actually become so large and usually works with numerous business for suppliers and services. The business will instill in the economy and others business will depend on it for portions of income. If it dealing with financial issue might reason for failure,...

Throughout my class lectures and discussions in many of my classes, I recall one of my professors accenting the fact that teachers need to be flexible in their schedule and need to conform to the changes that are associated with the career. Upon hearing this, I didn’t accept this fact she was giving me and...

Roles, responsibilities and relationships in education and training

Task A As a teacher in the learning environment I feel it is very important to meet the requirements and needs of the Students. It is the teacher’s responsibility to ensure that the Students feel that they can express themselves and self realise their true potential. The single most important attribute of a good teacher...