One man’s trash is definitely another man’s treasure. Recycling is another way of looking at trash as a treasure. Scraping is were you turn peoples trash into money and it all starts with recycling . Even thought recycling seems like a new way of thinking introduced in the 1970’s during the environmental movement. It has actually been around for thousands of years. Before the industrial movement it was hard and expensive to make products. Every one practice some kid of recycling.

Don't use plagiarized sources.
Get Your Custom Essay on Recycling Essay Introduction Just from $13,9/Page

Large scale recycling like we have to day was nonexistent.

Mass production made possible by the industrial movement is why we need to worry about large recycling programs. When products started being made more cheaply do to the larger scale of production it became more sensible to throw away old items and buy new ones then to try and recycle them. This type of thinking started to make a lot of environmental problems in the 1930’s and 40’s. Therefore conservation and recycling became important in American society as well as in other parts of the world.

The great depression made recycling a necessary practice for people to survive because many could no longer afford new goods.

In the40’s materials such as rubber, nylon, and metal of any kind were saved and recycled to help support the war. In contrast the economy boom of the postwar years caused the American public to for get about recycling. How ever in the 1960’s and 70’s there was an environmental movement that made conservation and recycling a main stream idea once again. Due to public acceptance recycling dose increased year to year. (Grabianowski) Recycling has became a job to some people because the price on metal is increasing and jobs getting harder to find people are scraping which is just another form of recycling.

This is where you find some form of metal that some one is throwing away and take it down to the scrap yard where they pay you by the pound for what you bring in. (Smith) You don’t have to just recycle news papers and plastic because almost any thing can be recycled. For example not many people know that old computers can be recycled. All computers have small amounts of gold and silver in them that can be removed and sold. The circuit boards, screens, and other elements can be removed and resold.

There are many online groups, such as UsedComputer. om that buy used computers and refurbish them for sale elsewhere in the world. So if you are upgrading to a new computer at home or have a friend that is make sure you recycle it. Any computer or electronics store will be glade to take your old computer for you and sometimes ink cartages for you. If you have an old cell phone then guess what those are also a great thing to recycle they get repurposed for people in other countries. (“Creative recycling”) Lots of people as why should I recycle so here are a few reasons why you should. Recycling saves trees.

Half the Earth’s forests are gone, and a lot of the original forest area in the U. S. has been cut down. Recycling protects wildlife habitat by saving trees. Recycling reduces the use of toxic chemicals that are needed to make new products. Recycling one ton of glass results in energy savings of more than 300%. Recycling reduces water pollution. Recycling reduces the need for landfills. Toxic pollution from landfills, including cyanide, dioxins, mercury, methane, hydrochloric acid, sulfuric acid and lead escapes into the air and leaches into groundwater. Recycling creates jobs and promotes economic development.

You may also be interested in the following: essay about recycling benefits, benefits of recycling essay 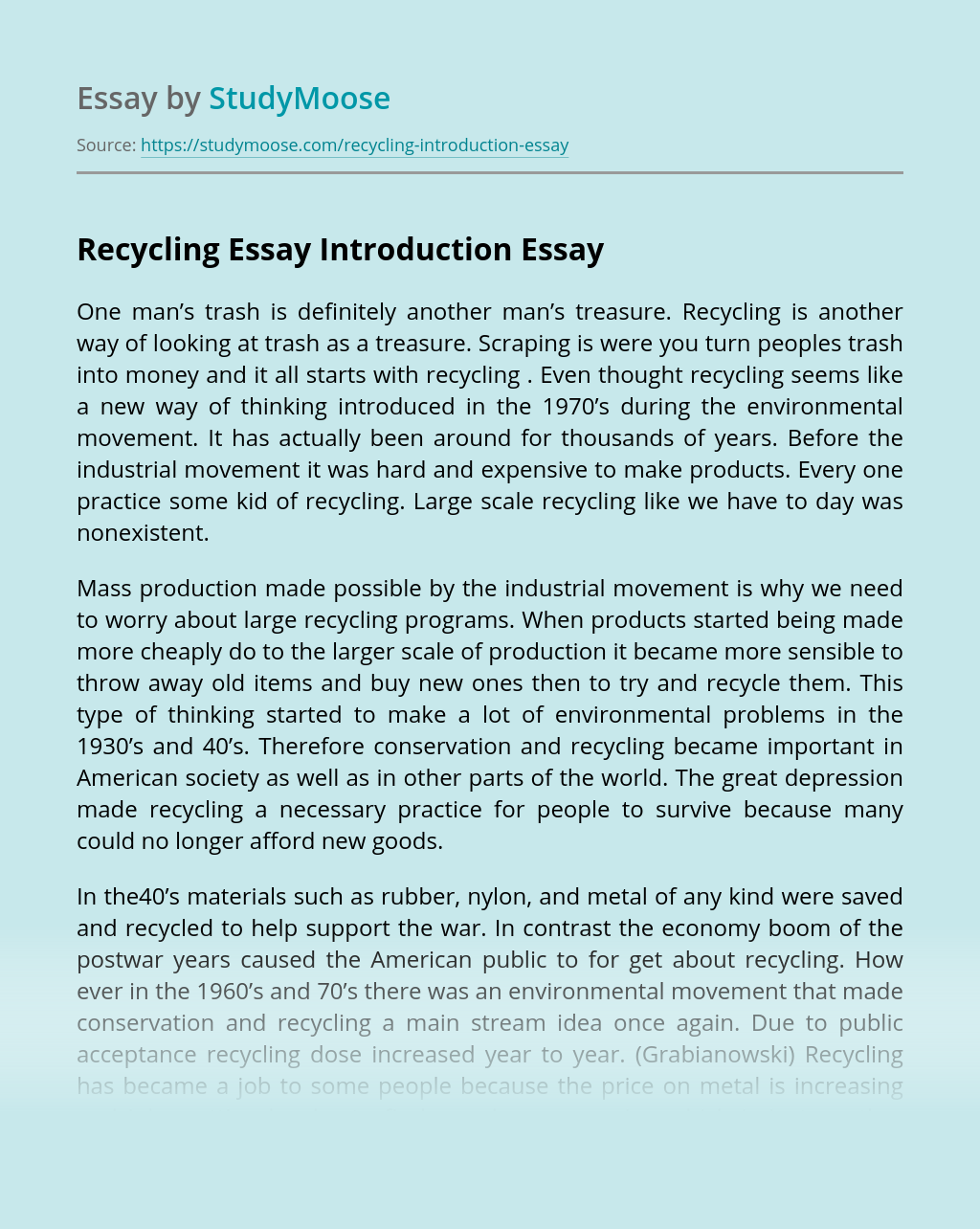 THE ADOLESCENT OBSERVATION TASHONIA MITCHELL SOC 312 INTRODUCTION Adolescence ranges from the ages of 13 and 19 years of age. This period is considered the provisional stage from adulthood to childhood. The psychological and physical the changes that occur in adolescence can start as earlier as the preteen years. During this period of awkwardness and... VIEW ESSAY

View sample
Get Essay
Because I Could Not Stop For Death

The poem is generally about death and the thoughts going on in the mind of the person nearing it. In simple and short phrases, the persona of the poem is expressing his feelings towards the end of his life on earth and the beginning of his immortality in eternity. The poem basically treats death not... VIEW ESSAY

Many call him rich but I call him dad. He is the man who has taught me to be the person I am today. My dad has been there for me every day since I was born, and what my family and I have put him through I probably would have gone crazy a long... VIEW ESSAY

Morality and ethics are terms often used as if they have the same meaning. At other times, they are used as if they have no relationship to one another. I think most people realize ethics and morality have something to do with the concepts of good and bad. The word “morality” has been co-opted by... VIEW ESSAY