Reconstruction Era of the United States

92. In 1865 an appointment was held between representatives of an African American community in Savannah, Georgia and Edwin Staunton, Secretary of War, and Major General Sherman concerning topics of the freedman in Georgia. Land was set aside, 40 acres, and a mule that could no longer be used by the Army to establish a community of their own.

1. Black leaders believed that owning land was essential to freedom because by them owning their own land they would be able to support themselves by themselves.

Don't use plagiarized sources. Get your custom essay on
“ Reconstruction Era of the United States ”
Get custom paper
NEW! smart matching with writer

2. Blacks understand their relationship to the national government as the Civil War drew to a close as being dependent upon their freedom.
Q: Why 40 acres and a broken down mule? Do you believe they deserved more/less land? Did they not deserve a more useful mule? 93. The committee on behalf of the freedmen sent a letter to Andrew Johnson in 1865 concerning keeping the land, which had been set aside for them after the war, which had been rumored to be given back to the previous owner.

1. It was important for the petitioners to obtain the land on Edisto Island as opposed to land elsewhere in the country because there was a legal agreement made that should be adhered to.
2. The relationship between owning land and freedom to them is not having to rely on anyone else and being able to feel equal to the white men.
Q: What similarities does this have to the Native Americans? 94. The Mississippi black code of 1865 was rules and regulations on which African Americans had to adhere to.

1. I think that the state of Mississippi required all black persons to sign yearly labor contracts but not white citizens because the vagrant law only applied to freedmen and it was a way of regulating work for the plantations.

Q: Do you feel as though the freedmen were really free since these rules and regulations were bestowed upon them? 95. This was a sharecropping contract between Thomas J. Ross, a land owner, and 8 freedmen. The contract set the rules, regulations, and remunerations for sharecropping Ross’s land.

1. The contract limits the freedom of the laborers in that they are still under the power of the land owner, with essentially the same rules as being a slave except they were getting paid in the crop for their work.

Q: Do you feel as though sharecropping as a whole, with the good and the bad, was a good idea? 96. During the Reconstruction period Elizabeth Staunton demanded the idea of equality for women. In her essay she expressed ways that men and women are equal but not seen as being so, she also believed that women should be able to vote.

1. Stanton defined the “social revolution” the United States underwent after the Civil War as because it went deep down to the very foundation of society.
2. Stanton believed that industrial freedom within the family could be established by first changing the laws and public opinion.
Q: How do you think that women felt not having any rights even after the Civil war that once again established freedom for all. 97. Frederick Douglass gave a speech, Composite Nation, in Boston in 1869 concerning rights for Asian-Americans. He condemned anti-Asian discrimination and called for equal rights for all Americans.

1. What Douglas meant by the term “Composite Nation” was that everyone in the nation came from different places to form one nation.
2. He believed that people should be allowed to move freely from one country to another because he felt as though we were allowed to travel to other countries why couldn’t other races?
Q: Do you think that Douglas would have the same views for current times? 98. Robert B. Elliott delivered a speech to Congress in 1864 concerning a bill that he supported, that later became the Civil Rights Act of 1875.

1. Elliot defended the constitutionality of the Civil Rights Bill by saying that the bill would settle the political status forever.
2. Elliott referred to the “cornerstone speech” of Alexander H. Stephens in making his argument because it showed how much progress had been made.
Q: Why did all the states not follow the Civil Rights Bill?

Reconstruction Era of the United States. (2016, Oct 25). Retrieved from https://studymoose.com/reconstruction-era-of-the-united-states-essay 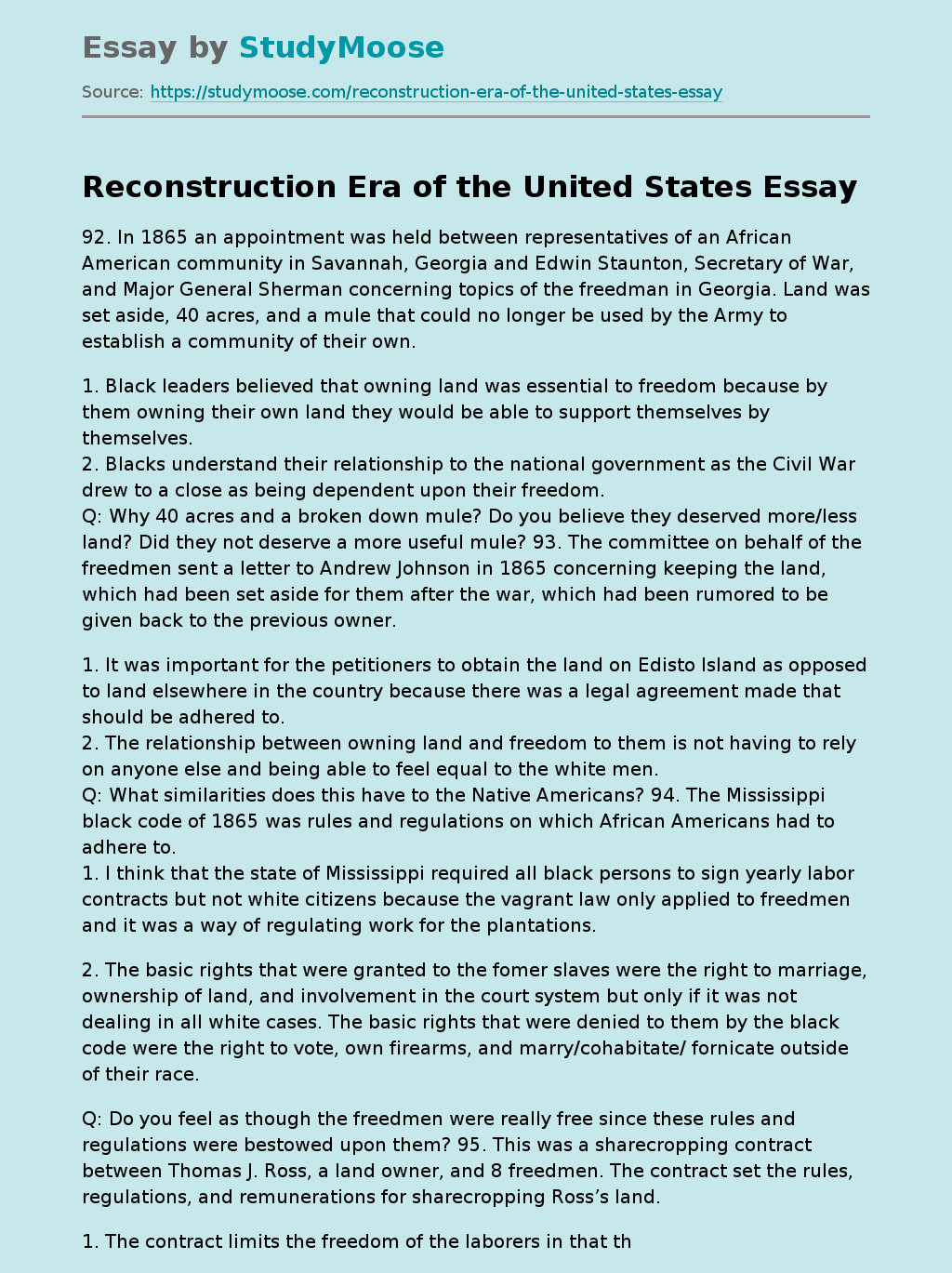