During the Middle Ages, love pervaded artistic society with the first tales of romance appearing and the emergence of the phenomenon known now as “courtly love”. Though popular, “courtly love” caused individuals involved to run afoul of the Roman Catholic Church due to the extramarital aspect of such relationships. Despite such irreverence, Andreas Capellanus, a ranking member of the clergy, penned the paramount work on the topic, The Art of Courtly Love. At first glance, Capellanus’s treatise sounds absurd both in reference to his profession and its content and for the piece and Capellanus, therein resides the purpose.

Don't use plagiarized sources. Get your custom essay on
“ Reconciling the Three Books of The Art of Courtly Love by Andreas Capellanus ”
Get custom paper
NEW! smart matching with writer

Capellanus, in his The Art of Courtly Love, offer exaggerates advice in books one and two, before undermining his farfetched claims in book three to criticize the Medieval practice of “courtly love”.

The first book of The Art of Courtly Love details Capellanus’s advice for acquiring a relationship, though he hints that he intends to mock love. At the beginning of the treatise, Capellanus outlines point blank his overarching topic: “what love is” and “how it may be acquired” (Capellanus, 28).

On the subject of what love is, he declares it a “suffering” that intensifies “the more [a man] thinks about [a woman]” (Capellanus, 29). There lies an element of truth to his words on this. When a person finds themselves infatuated with another, that person experiences the strange sensation of overcoming passion synonymous to love. Indeed, as with this case, Capellanus makes a realistic point on occasion regarding love and its inner-workings.

However, the majority of arguments he chooses to levy thereafter border on the preposterous. As he begins to investigate the effects of love, Capellanus attributes to love the magical quality of making “a man shine with so many virtues” (Capellanus, 31). By his logic, love should turn the dreariest individual into a beacon for positivity in a way no other concept can. Love can change the outlook of someone on life, but even its power will not affect their innate persona. With such a description, Capellanus grants love a type of power both beyond imagination in strength and influence. This hyperbole hints at his desire to satirize “courtly love”, a concept that one could see as the antithesis of what the Catholic Church holds dear: chastity until marriage, and uncompromising devotion to one’s betrothed. In addition, some of his assertions strike the reader as naïve in an excessive manner such as his quotation of a proverbial phrase that “beauty never pleases if it lacks goodness” (Capellanus, 35). Capellanus speaks from his experience, or lack thereof, as a member of the clergy with such a quotation. Humans as a race claim to desire wholesome personalities and individuals of high moral character as lifelong companions. However, Capellanus discounts the power that one body can have over another. True, people from all walks of life wish for a mate that looks at the world as a place to better and not as their oyster to scrape for all its transient benefits. With that said, most human beings do not own the inner convictions to cast aside appearance in favor of what lies beneath the corporal. His argument exists as a pure hypothesis with little intent on exploring the realities he crafts. Such thought exercises lack a practical nature evident in most realistic arguments, hinting once more at Capellanus’ true purpose to admonish those who partake in the phenomenon of “courtly love”.

Book two continues Capellanus’s lampoon of the practice of “courtly love” with the focus now on how one can keep a love once they have it. In his first piece of advice in this section, Capellanus urges lovers to keep their love] hidden from everybody” (Capellanus, 151). For the first time in the text, Capellanus makes clear that “courtly love” describes a love out of wedlock. To Catholics and later, Protestants and Orthodox Christians, extramarital affairs signify grave sin. This poses a problem as a chaplain offering hints on protecting one’s illicit relationship seems contrary to their mission statement. One must acknowledge that either Capellanus practiced active heresy against the church he gave his life to or intended his work to serve as a higher form of pointed humor. Furthermore, Capellanus digresses to inspect how the love between two parties can decrease, including that “too much chance to talk to each other” will decrease love (Capellanus, 154). Though many now repeat that “distance makes the heart grow fonder”, Capellanus may have taken such a concept to excessive extremes as he contrasts this phrase with one advising a relationship where meetings prove rare and difficult (Capellanus, 153). Therefore, he argues that lovers should meet as few times as possible to cultivate a raging, out-of-control passion for each other. Such a relationship appears impossible for the less times lovers meet, the less one can entitle the relationship “love”. This example points further in the direction of satire, as such an ironic statement only has a place in satirical works. Capellanus, thus, desires the reader to realize the impracticality of this type of love and to avoid it.

During book three, Capellanus shifts viewpoints and begins to highlight the problems and fickleness of love. Capellanus begins book three addressing his friend, Walter, and therefore the reader, that the prior two books serve to prevent Walter and the reader from believing Capellanus unknowledgeable about matters of love (Capellanus, 187). Capellanus then states that “any man who devotes his efforts to love loses all his usefulness” (Capellanus, 187). To Capellanus, love foils whatever abilities an individual has, and here again, lies an element of blatant truth within a piece full of exaggeration. Love, while lacking omnipotence in the molding of a human being, does tend to fixate one’s attention away from intellectual or less carnal matters. One cannot hope to accomplish monumental achievements if that one has focused on less than intellectual matters. To discourage distractions, Capellanus portrays women as evil creatures, intent to extract all they can from those that they claim to love. He denies that women ever experience true love and that instead, they have “the vice of a grasping and avaricious disposition” and look for profit (Capellanus, 200). Such conceptions persist to the modern day with the derogatory term “gold digger”, yet to Capellanus, such a word would only define the inherent nature of a woman. No individual longs for a partner that takes and takes and takes. Even in the most platonic and transactional of relationships, transactions must occur to make the situation symbiotic. Capellanus hopes to convince the reader that women leach off their significant other, draining their coffers until not a cent remains. He illuminates a situation where few with any sense of logic would care to scoff at his advice.

Capellanus makes use of each section of his treatise to expose and caution against “courtly love”. That such a practice existed in amounts where such work came into being speaks volumes to the draw of romance. With the Middle Ages marking the height of the Catholic Church’s influence over the West, this kind of public repudiation of the faith’s teachings dismantles any notion that religion can prevent all adherents from crossing a line. Capellanus made a valiant effort, but his work did not prohibit the practice in his day and its impact feels even smaller today. In spite of its shortcomings, his use of satire marks one of its first appearances in the West, meaning that The Art of Courtly Love’s legacy lies not in what it hoped to achieve, but what it has allowed later writers to achieve.

Reconciling the Three Books of The Art of Courtly Love by Andreas Capellanus. (2021, Sep 24). Retrieved from https://studymoose.com/reconciling-the-three-books-of-the-art-of-courtly-love-by-andreas-capellanus-essay 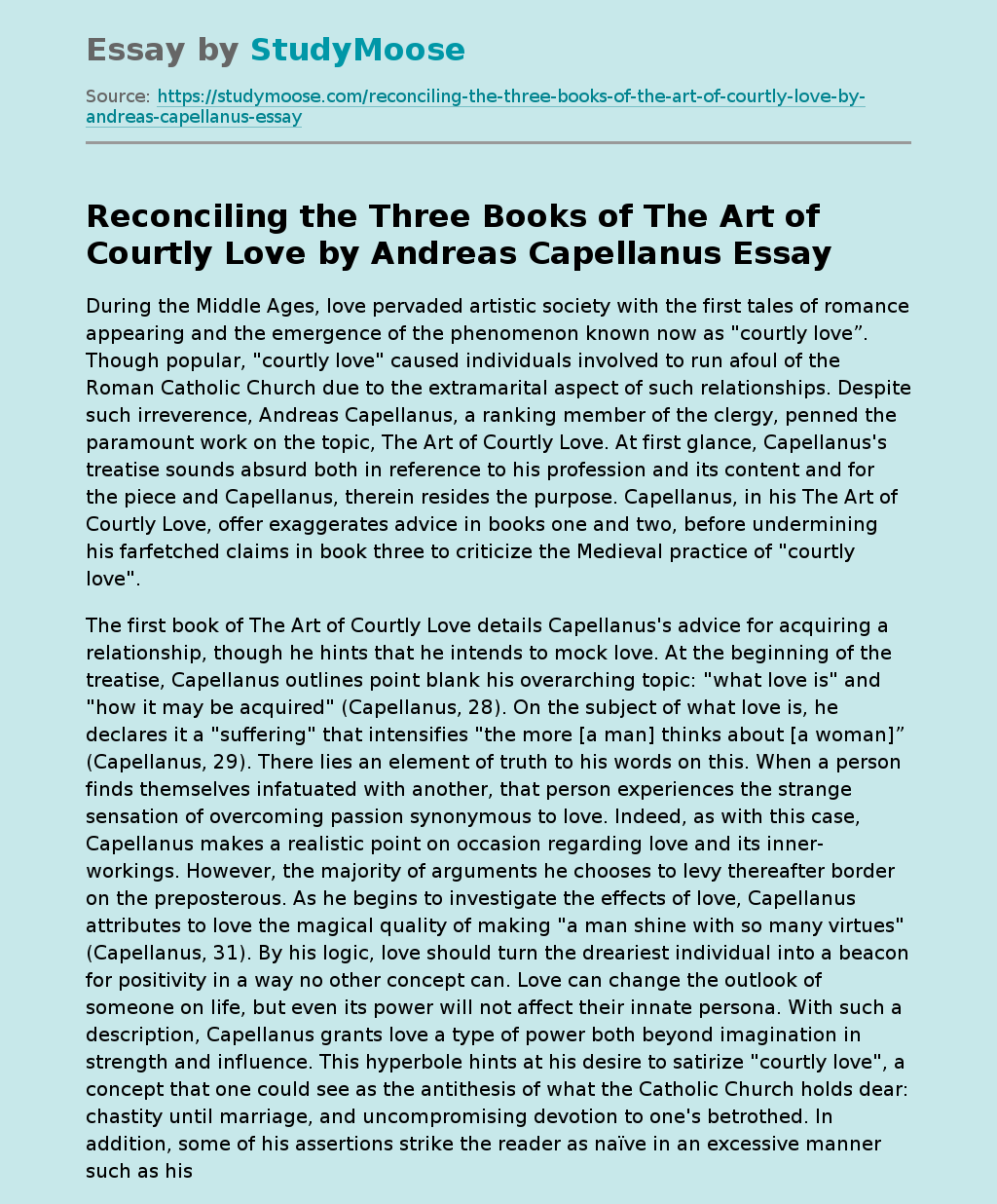