A Woman’s Role Have you ever thought about how a woman’s role in the household would be like 50 years ago? Consequently, the role of women in the 1950s was suppressive and constrictive in many ways. Compared to the role of a woman today, the role of women in 1950 had different expectations, roles, and opportunity. Society had placed a high significance and many expectations on the performance at home as well as in public. Women were supposed to fulfill certain roles, such as a caring mother, a hard-working homemaker, and a submissive wife.

Don't use plagiarized sources. Get your custom essay on
“ Recent Gender Roles In Society and Women’s Rights ”
Get custom paper
NEW! smart matching with writer

The perfect mother was supposed to stay home every day and nurture her children so that society would accept them. A hard-working homemaker had dinner on the table precisely at the moment her husband arrived home from work” (“A Women’s Role”). To be a good wife then, they were expected to be pure and innocent and keep the home and raise the children; however, in order to gain attention from men they desired, they would have to step outside traditional boundaries and be aggressive and seductive.

First, the role of a woman in the 1950s had different expectations.

A woman had to prepare the children for dinner; which was taking a few minutes to wash the children’s hands and faces, comb their hair, and if necessary change their clothes. They are God’s creatures and the husband would like to see them playing the part. Also, all noise had to be eliminated. This statement contends to encourage the children to be quit.

Every morning, she woke her children up, cooked breakfast for them and sent them off to school. “The breakfast, however, was far from the cereal and milk often enjoyed today.

This was feast that consisted of towers of pancakes, piles of eggs, and platefuls of bacon and patties, all topped with a pound of syrup” (“A Woman’s Role in the 1950s”). Such over exaggerated behavior was typical of women at this time. They wanted to appeal to men and society; as a result, they felt like they to be a perfect and hard working mother. They only felt secure when they were praised for their house keeping. A hard-working homemaker not only kept the house spotless but she cooked dinner, did laundry and ran errands. Have dinner ready. Prepare yourself. Always be sure to touch up your makeup, put a ribbon in your hair and be clean looking” (“A Woman’s Role in the 1950s”). Women were expected to clear away the clutter and run a dust cloth over the tables. Women would do anything to please their men because their life depended on them so much. The man were to have total control of their wives. In today’s world, a woman has different expectations. Women were expected to have dinner prepared for her family; however, they don’t have to be refreshed for dinner.

For instance, women can question their husband if he is late coming home. In the 1950s, the woman’s life revolved around the house, including when she went out to meet her friends. These days, a woman’s life doesn’t revolve around her home. Most women clean house about once or twice a week. The first thing a woman does when their man comes home from work is greet them with their problems and complaints. “The heart of her husband doth safely trust in her so that he shall have no need of spoil. She will do him good and not evil all the days of her life” (“How to be a Good Wife”).

The husband shouldn’t have to worry about the need being met in their home, whether physical or material. “Let the husband render unto the wife due benevolence: and likewise also the wife unto the husband. The wife hath not power of his own body, but the wife” (A Woman’s Role in the 1950s”). This statement contends that women and men should have equal opportunity. They shouldn’t have to do more than the other. When two people become one flesh, their priorities shall change. They now should be concerned about pleasing their spouse; however, women should have their own rights too.

Outside the framework of the specifically motherhood and fatherhood characteristics where they perform absolutely different functions; men and women have vast areas to conquer, building life shoulder to shoulder as human beings, equal in humanity. Then, the roles of women in the 1950s are drastically different compared to a woman’s role in today’s world. There were many things women had to do to please their spouse during the 1950s. Arrange his pillow and offer to take off his shoes. Speak in a low, soft, soothing voice.

Listen to him: you may have dozens of things to tell him, but the moment of his arrival is not the time. Let him talk first. Make the evening his. Never complain if he doesn’t take you out to dinner or other pleasant entertainments. (“How to be a Good Wife”). Woman had to accept their spouse at face value, admire the manly things about him and recognize his superior strength and ability. They can’t try to change him, excel him in anything which requires masculine ability, and don’t show indifference, contempt, or ridicule towards his masculine abilities, achievements or ideas.

Women also had to be a domestic goddess, work for inner happiness and seek to understand its rules, and revere their husband and honor his right to rule her and their children. The outside world was not able to crowd her for the time to do her homemaking tasks well. (“How to be a Good Wife”). Undoubtedly, women were not to have a lot of preconceived ideas of what she wants out of life. She could not stand in the way of his decisions or his law, regardless of what she thought. Although the pressure of being a prefect wife and mother are now gone, pressure remains to get a good education and become a successful citizen.

However, women have gone to the extreme to attempt becoming equal to their spouse. In reality, the goal should be freedom of choice without anyone being prejudice. A woman, like any man, should have the right to choose whether she wants a career or be a stay at home mom. Neither stereotype is healthy nor right; nevertheless, woman who think they have accomplished the goal are delusional. “But I would have you without carefulness. He that is unmarried careth for the things that belong to the Lord, how he may please the Lord: but he that is married careth for the things that are of the world, how he may please his wife” (A Woman’s Role”).

God created men and women to build their life together and to complete one another for a lifetime. They are to wade through all the fields of struggle in life side by side with men, supporting each other, helping, and completing one another. Men and women are protectors of one another. Lastly, women in the 1950’s didn’t have much opportunity of anything. The only role they were able to play was motherhood and a homemaker. The brave women that chose to learn further were not taught mathematics and science (fields they were later going to succeed in) but home economics and cooking.

Men feared intelligent women because of their tendency to think for themselves and disagree with their spouse. As soon as a woman learns something, she becomes a threat, seemingly to his adulthood and manliness. (“How to be a Good Wife”). Motherhood is the most important feminine role that a woman fulfills. Motherhood itself is not purely a feminine role; nevertheless, alit is a human role in a woman’s life. Thus, the role of a woman as a human being remains her most essential role in life. However, a woman’s humanity is the most important aspect in their personality because it’s the aspect that symbolized them to achieve in this world.

The human aspect of her personality will indeed be integrated with the feminine aspect of her conduct as a female, whether with her husband or within her own specific sensations of femininity. It is an aspect that refined the instinct and humanized it in deeds as well as in feelings. The marital relationship is no longer a relationship in which the female provides the male with her biological drives. It will rather be a human relationship where each partner, male or female, makes use of his own distinguishing characteristics in order to give the other what satisfies both his emotional and physical needs. (“A Woman’s Role”).

Woman in today’s world have many opportunities that women didn’t have in the 1950s. Men never trusted their wives with money because they were not educated enough, yet inconsistently, it was untraditional for a woman to receive as good of an education. The fact that a woman was even attending college was paranormal. Most women were married after high school and fell into their traditional roles right away. For women to be respected now, a woman has to be a career woman balancing both children and a job. In fact, stay at home moms now receive the same degrading look as educated working women did in the 50’s. It was seen as only right and proper that the wife should keep the home running smoothly, making it a quit haven of peace and joy for her husband, the breadwinner. ” (A Woman’s Role in the 1950s”). Her role in the marriage was simply not considered to be on the same level as his. Absolutely, the troubles of running a home were never to be openly compared with a man’s daily travails. He earns money, she didn’t; therefore, his work was important. We don’t want to believe any woman, even half a century ago, was willing to submit herself to a life of servitude in order to be considered successful at her most important role in life.

In the 1950s, it’s true that in those days a woman’s province was understood to be the home” (“How to be a Good Wife”). To her fell the housework and the childrearing, household tasks considered her incontrovertible purpose in life, her highest calling—not something willingly undertaken. “It has become fashionable to portray outdated societal behaviors and attitudes—ones we now consider desperately wrongheaded—to be worse than they really were as a way of making a point about how much we’ve improved. ” (“How to be a Good Wife. ) When we despair over the human condition and feel the need for a little pat on the back, a few startling comparisons between us modern progressive individuals and those terrible Neanderthals of yesteryear give us that. After reading the roles of the women in the 1950s, I want to see it as a condensation of the worst of this particular delight through era, a precipitate that displayed only the most servile aspects of what women was led to believe was their right and proper function. Call it an exaggeration, if you will. (How to be a Good Wife). 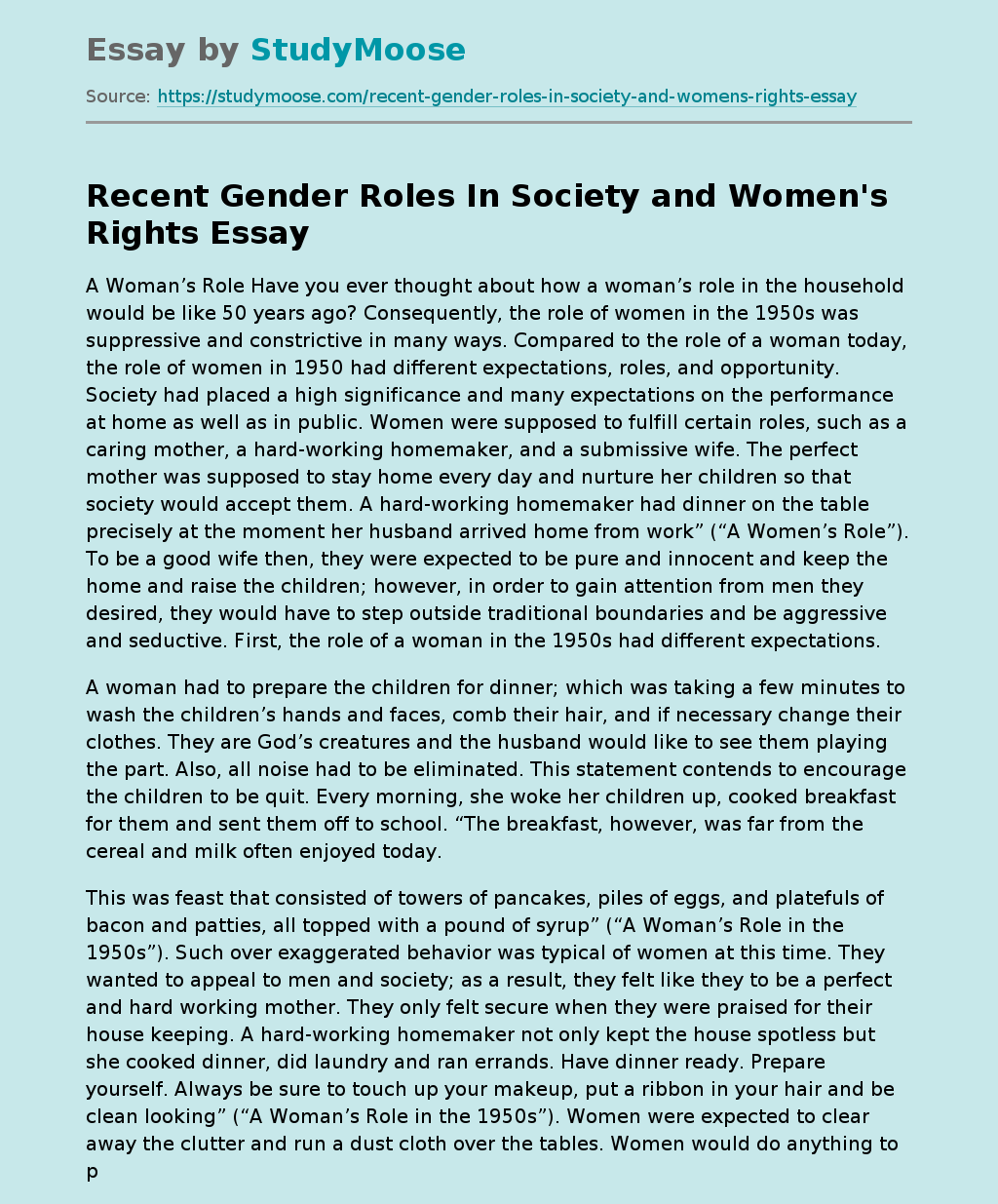