For the past 17 months, shown on every television news channel across the United States. The case of George Zimmerman, and the shooting death of 17-year-old Trayvon Martin. Like every year, the media will take a case and publicly turn the story into a circus. The rebuttal article for this paper is a story written by Oliver Knox of Yahoo.com titled, “Obama: Trayvon Martin could have been me 35 years ago.” Further discussion will analyze the reliability, credibility, and validity of the data used by Oliver Knox, and identify any logical fallacies in the argument.

Don't use plagiarized sources. Get your custom essay on
“ Rebuttal of Oliver Knox Article ”
Get custom paper
NEW! smart matching with writer

By using personal experiences, the president discussed his life as a young African American dealing with racism in the United States.

I find that the reliability, credibility, and validity of this article and author Oliver Knox highly trusted, convincing, and believable. News articles written and posted by Yahoo.com reports a straightforward message to their audience. Reporting stories down the middle, never too left or right with the occasional bias author either for or against a particular topic. Keeping political views down to a minimal.

This particular article matches other similar articles written on the same news story. Second, Oliver Knox wrote the story on the statements and words of the president as he addresses the American public. Third, the genuine author of this story is President Barack Obama himself, Oliver Knox just wrote his statement. The audience that the president focused on in his address is the African American people. Using his own personal experiences, the president can relate to the ongoing outrage of the African American public. President Obama feels the pain and disappointments of the outcome of the case. Because of this story first came out 17 months ago, many logical fallacies surfaced about this case. First, the media leaned toward a killing of an innocent young 17-year-old boy, minding his own business. Then showing a photo of this boy at the age of 12.

Then here comes George Zimmerman, looking for trouble and looking for a fight by picking on a young African American boy. Would the story stay the same if George Zimmerman was African American with the same outcome, the public will never know what happened that night. Meanwhile, the story set the tone for future stories about this case. Raising the question about race possess anything to do with the incident between George Zimmerman and Trayvon Martin. The logical fallacies of this article happened when President Obama expressed his concerns and personal experiences with the American people. This incident could easily be him 35 years ago as a young person dealing with racism in America. Concern that African Americans think that this case developed on race. A belief in the legal system would have a different outcome if Trayvon were white. Even after juror number B37 came out stating that race had no issue to the outcome of the case.

Both the jury and legal experts stated that Zimmerman and Trayvon made poor judgment the night, which led to the death of Trayvon. Statements by the jury referring the only reason for Zimmerman’s acquittal because the way the “stand your ground” law is written. This article also provided some good highlighted points. The president encouraged his audience to support and encourage the young people of this country by helping them achieve and succeed in life. To be more influential and guide them on the right track. If the young people do not have the support from family, friends, neighbors, and the community, who will help them stay on the righteous path (Obama, 2013).

This news article written by Oliver Knox and other journalists in this country, reporting the feelings and concerns addressed by this nation’s leader. Stating the issue of racism still lives in the lives of some American people. Relating to his own personal feelings on racism and demanding change to overcome these barriers. So the people, as a nation will never see another George Zimmerman and Trayvon Martin case again. 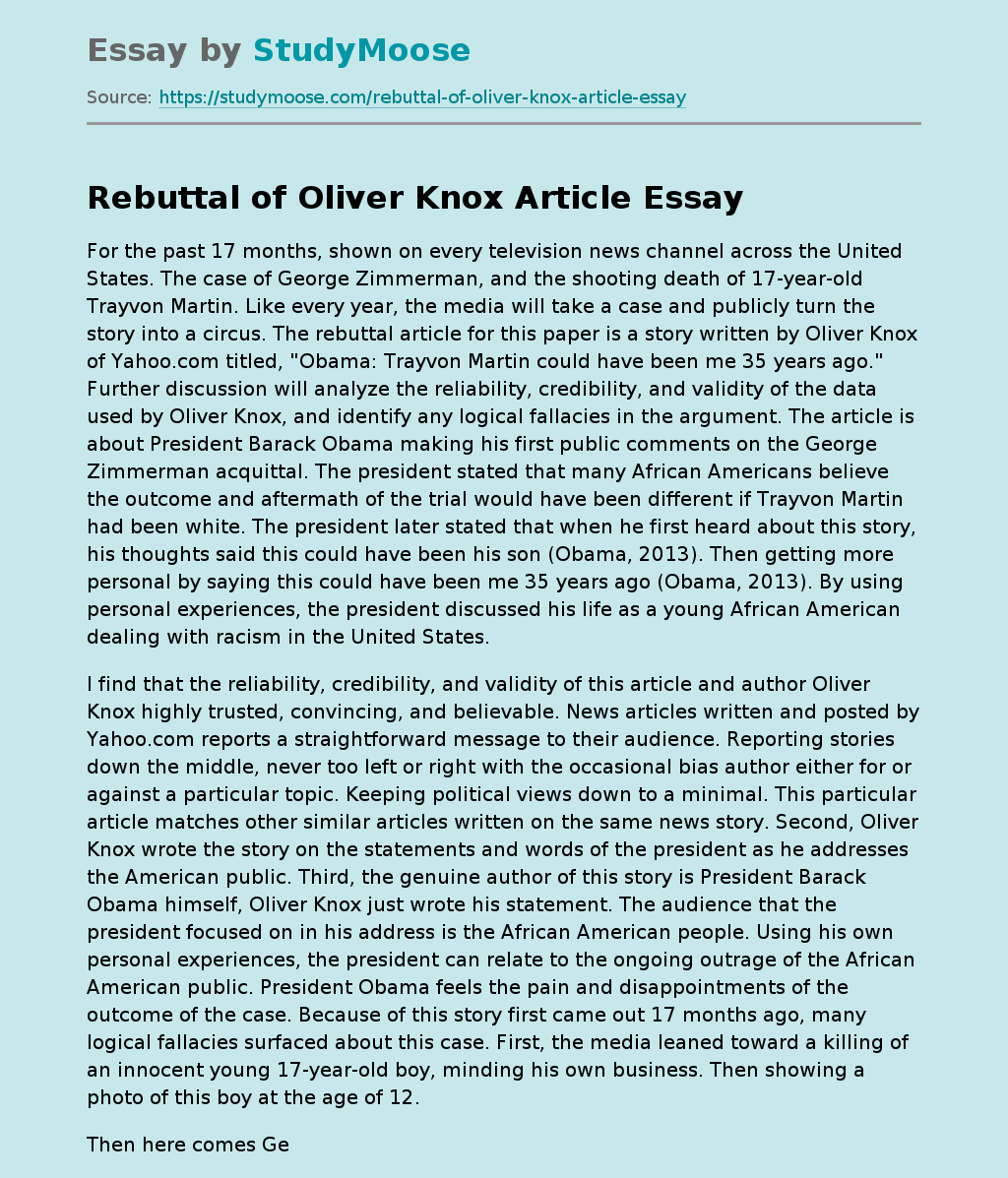