Reason of Rising of Detente in History

During 1968-1978, The tensed relations between 2 superpowers—US and USSR relaxed. Both of them tried various means to bring about peace such as closer communication and co-operations, Armament limitation etc. However, detente failed at the end of 1970s and marked the beginning of 2nd stage of cold war. There were several reasons which led to the rise of detente and the end of detente. The First reason for the rise of detente was because both superpowers were anxious to reduce the severe financial burden on military expenses.

Don't use plagiarized sources. Get your custom essay on
“ Reason of Rising of Detente in History ”
Get custom paper
NEW! smart matching with writer

Since both sides were trying to defeat one another during cold war, they attempted in weakening another one by producing nuclear weapons. According to statistics, The military expenses almost occupied 41% of the annual total expenses of US. USSR also suffered from severe military burden. It was a heavy burden for both of them, therefore, they were willing to slow down the armament race by producing less nuclear weapns. They adopted the non-commitment policy which helped to ease international tensions in1970s.

The reduction of military costs helped the rise of detente.

The second reason for the rise of detente was the fear towards a nuclear war. Since tensions between them would increase the chance of the outbreak of nuclear war. They dared not to bear the risk of devastating destruction of civilization of human beings by nuclear war. As a result, they began to adopt a relatively moderate attitude towards each other instead of being rigid. This help to reduce tensions between them. The third reason for the rise of detente was because the two superpowers had learnt lessons from Vietnam war as well as Korean War.

They knew that war was not a way to contain either blocs. The US paid a hude price for defending the free world against communism. The heavy casualties and expenses drove the Americans to reconsider the intervention policy towards world matters since 1947. Since America was on the verge of social revolution as a result, it adopted a more conciliatory attitude towards the communist bloc in order to prevent a nuclear war. The forth reason for the rise of detente was that USSR wanted to use its resources to develop homes economy and to raise the living standard of its people.

In addition detente benefited to USSR as it can increase the trade with the western countries so as to develop its own economy. This can also avoid the formation of alliance between china and America. The fifth reason for the rise of detente was the split between USSR and China since the mid 60s. At the very beginning China and USSR established a close relationship as they were both communist countries which work together to confront against US. However the criticism of Khrushchev towards the Great Leap Foorward and The criticism of Community Party of China towards the view of Khrushchev led to the split between USSR and China.

After that, these two countries were hostile to one another. An armed conflict on the sino-Soviet border in1969 further damaged their relations. The split between china and USSR helped the rise of detente as US considered USSR as a less threatening foe towards its leading position in the world without the alley-china. This helped improve the relationship between the two superpowers. The sisxth reason for the rise of detente was China and USSR were both feared of being isolated, hence they would like to develop a better relation with US.

The US promoted detente to keep them apart and a strategic balance of power among 3 powers was kept. Hence the tensions between the two superpowers was no longer as fierce as the 1st of cold war. The seventh reason for the rise of detente was that China broke its isolation by more contact with the west for trade and support in modernization. This help the rise of detente as Us had a new alley which made it felt that USSR was no longer as threatening as before. Unfortunately, detente failed in 1979. Firstly the failure of detente was because of the Soviet invasion in afghanistan in 1979.

The soviet sent troops to Afghanistan in order to overthrow a pro-us government there and extend its influence to the Persian gulf for tremendous amount of oil which were supplied by the Persian gulf region. The US also needed to prevent USSR from controlling Afghanistan. This is the important turning point for detente as both of them started to compete for natural resources again and this created tension and conflicts among them. This crisis triggered off their conflicts again. For example, the US Congress refused to ratify the SALT II treaty.

In addition, the Us stopped its wheat sales to the USSR, president Jimmy carter called on the international community to boycott the Olympic games held in Moscow in 1980. Secondly the failure of detente was because of soviet suppression of polish solidarity. The USSR asked the polish government to suppress the solidarity movement in Poland as it afraid that the movement would arouse the anti-soviet feelings among eastern European countries. The soviet suppression of solidarity caused the wide discontent of US and western countries as it had broken its promised of protection over human rights.

The Soviet suppression of polish solidarity led to the end of detente as US responsed to the action of USSR by asking the congress for an increase in military budget in order to produced more armaments and setting up more inter-continental missiles in Europe for defence against USSR. This led to the end of detente as superpowers were no longer willing to take a moderate attitude towards each other. Their restart of armament race intensified cold war again. Thirdly, detente failed because The introduction of star wars by US. And nearly 2000 military satellites were launched in space in 1980s.

The cold war intensified. To conclude, the reasons for the rise of detente were both superpowers were anxious to reduce the severe financial burden on military expenses, fear towards a nuclear war, the two superpowers had learnt lessons from Vietnam war as well as Korean War, USSR wanted to use its resources to develop homes economy and to raise the living standard of its people, the split between USSR and China since the mid 60s, China and USSR were both feared of being isolated, hence they would like to develop a better relation with US. And the failure of detente were because Soviet invasion in afghanistan in 1979, soviet suppression of polish solidarity, introduction of star wars by US.

Reason of Rising of Detente in History. (2016, Sep 18). Retrieved from https://studymoose.com/reason-of-rising-of-detente-in-history-essay 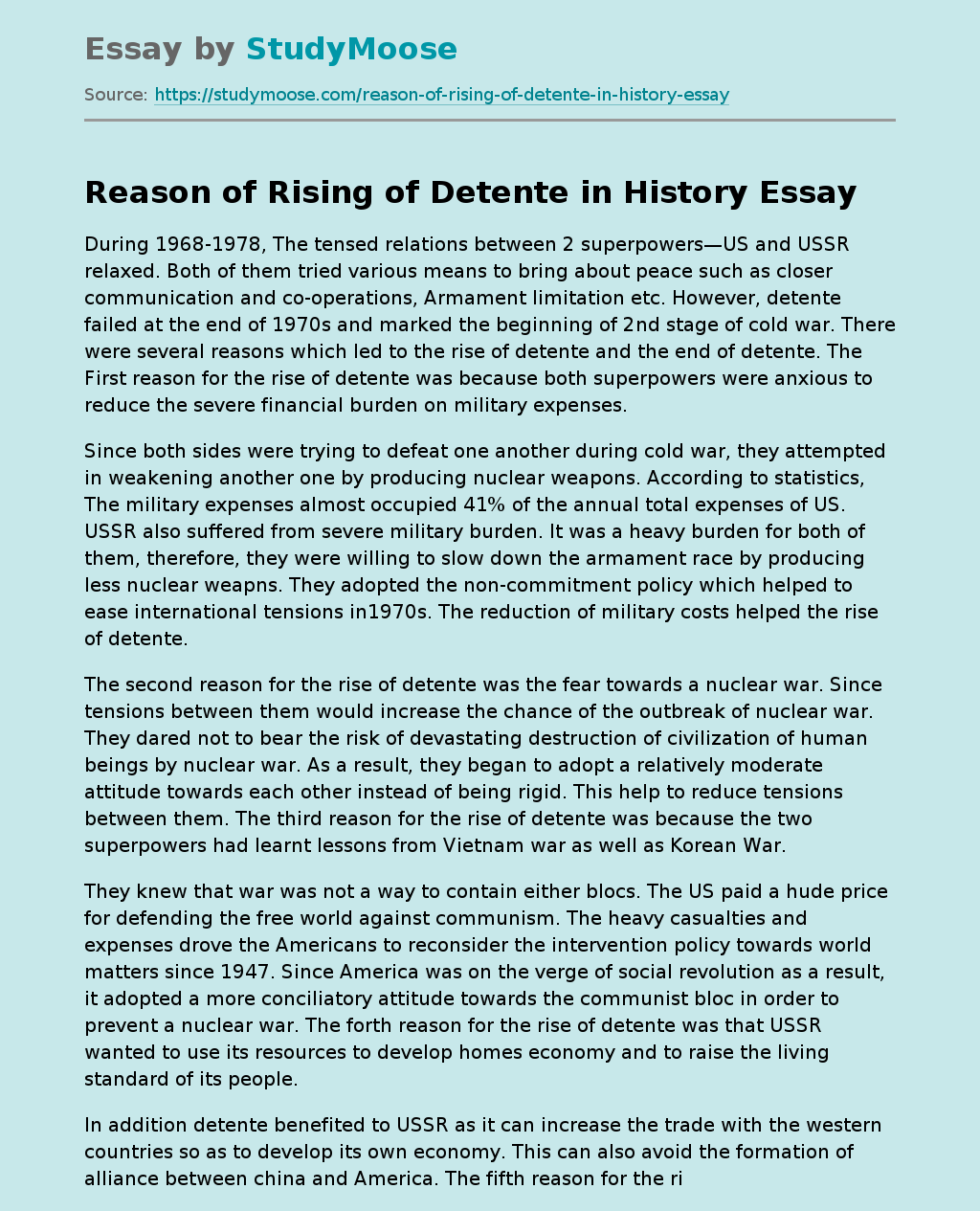