In the 1950’s film Rear Window, director Alfred Hitchcock sets his entire work looking through a man, L. B. Jeffries’ rear window. Because of his broken leg, Jeffries is confined to his apartment, and even to his wheelchair. It is here, in his apartment, that the protagonist watches, or even spies on his neighbors. He draws conclusions on these people, but from a distance: across the apartment-building courtyard. In addition to this physical distance separating Jeffries from his neighbors, his perspective, too, distances him from his conclusions.

Don't use plagiarized sources.
Get Your Custom Essay on Rear Window Just from $13,9/Page

Only seen through the glass of a window and the lens of a camera, Jeffries’ point of view is confined to only a single vision. We see that this single vision, however, provides Jeffries with an ample amount of information. The avant-garde cinematography combined with the original plot creates a new mean to film. Alfred Hitchcock’s innovative Rear Window allows the audience to bring their own experiences to the film: just as Jeffries draws conclusions on his neighbors from a distance, man too establishes his own perspective in the real world, and brings this experience to the film to understand its meaning.

In Rear Window’s opening scene, the camera slowly scans the setting that will surround L. B. Jeffries for the rest of the film. It pans over many apartments, all full of people doing different activities, going on his or her daily routine. This seemingly normal day in the New York City apartment complex gives the audience a sense of familiarity with the setting, and the people that live there. As seen through Jeffries’ rear window, this scene foreshadows the rest of the film; little does the audience know that what seems ordinary, a simple window, actually reveals more: crime.

Because the film’s title is Rear Window, this specific window indeed holds some significance. One could say the window hides Jeffries from the real world, as he is confined to his own apartment. While on the other hand, it could be said that the window submerges the protagonist into this world. I believe that the window serves as both tools: as the film’s antagonist, Thorwald sees Jeffries spying on him, Jeffries closes his window and retreats into his apartment- escaping the real world.

On the contrary, however, the audience sees Jeffries constantly peering through the window, using the pane of glass to almost enhance his vision, and draw his conclusions. Just as the window both hides and reveals L. B. Jeffries, so does his camera lens. Throughout the movie, Jeffries uses his lens to get a better vision of his neighbors and their activity. Yet the protagonist uses his camera in an unconventional way- rather than using it to take a snapshot of a certain instance, Jeffries uses the camera lens simply to magnify his vision, and gain a deeper understanding of his neighbors, especially Thorwald.

Just as L. B. Jeffries, I too have drawn conclusions on others from a distance. Attending a small high school comprised of only one thousand students, I have a superficial understanding of most of my peers. What seems to be a small distance separating my peers and I, actually acts as a barrier, just as Jeffries’ window and camera do. Recently, I was formally introduced to a peer of mine, who I simply knew by association. I had heard people give their own opinions about her, critique her, or speak highly of her- I had yet to draw my own conclusion of her.

It was only until I spent a few days with her, and had conversation with her that I could finally create my own opinion. For years I had an imprinted opinion of her in my head, but as I finally broke through the barrier, my rear window, I could either support or refute my assumption. Right on some accounts and wrong on others, I, like L. B. Jeffries, drew conclusions with a barrier; we both had been living behind our rear window. 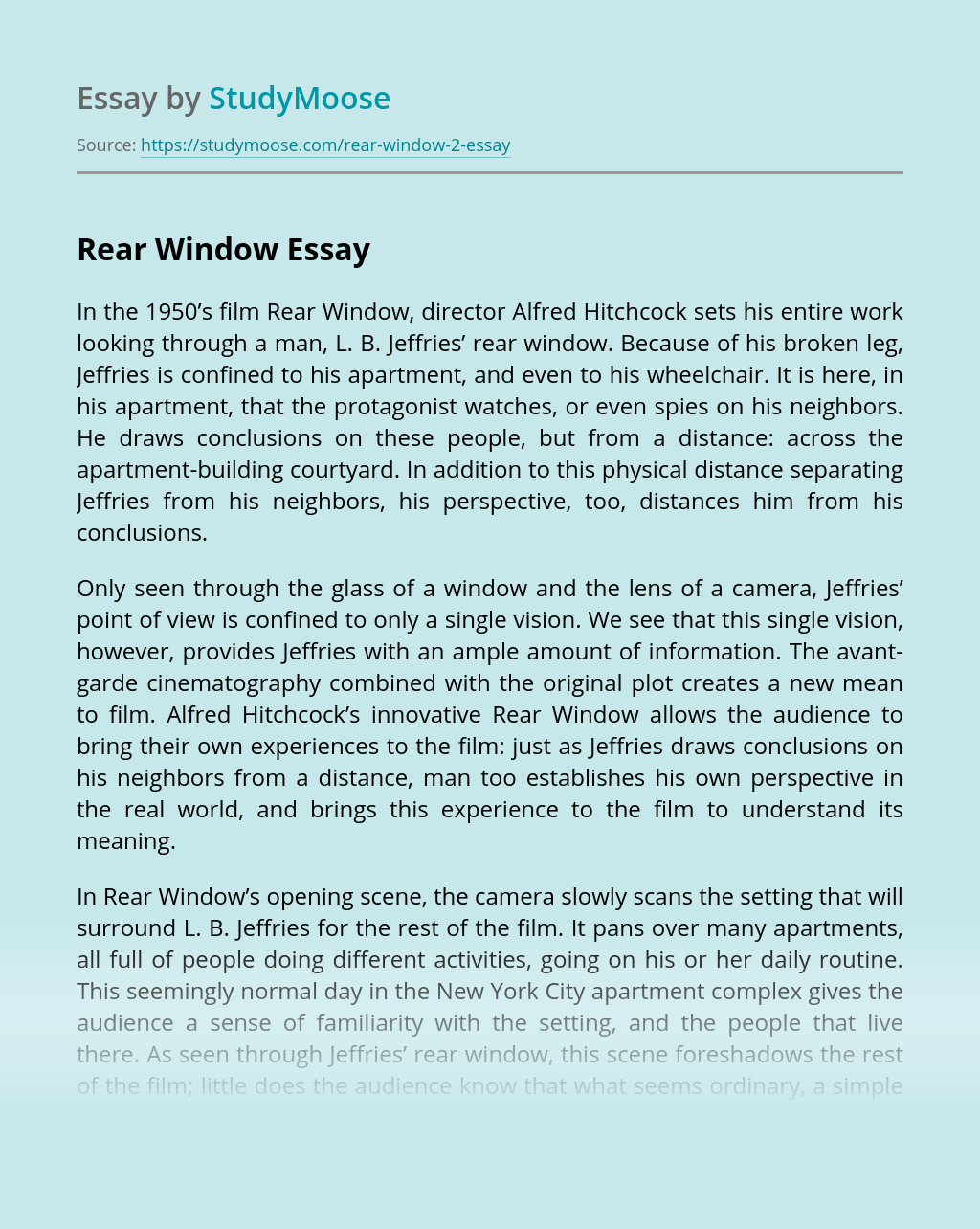 When the word “hero” comes to mind, people generally think of Superman, a military person who was in a war, or a person who has saved someone’s life. Hero headlines may read “Hero neighbor saves 7-year old girl who fell from third story window in Coney Island” (Robinson, A. & Paddock, B., NY Daily News,... VIEW ESSAY

Parle Products Pvt. Ltd.: A cream colored yellow stripped paper with a cute infant photo including 10-12 biscuits with the business’s name printed with in Red. Times changed, variety of biscuits did reoccur but absolutely nothing has altered with these biscuits. Yes, the size of their packaging has definitely changed however for the consumer excellent... VIEW ESSAY

Numerous decisions are taken every day. People choose when to get up on a certain morning, what clothing to wear, and whether to read a particular book. Most of the decisions made throughout the day are relatively trivial or inconsequential. It probably does not matter too much if it is decided to sleep an extra... VIEW ESSAY

The Mongols and Aztecs lived on completely different sides of the world. Although they had extreme differentials on Longitude and Latitude, the similarities between the two societies are compelling. The Mongols and the Aztecs were similar politically and socially. Politically, their Militaries were large and powerful; socially, women also had more rights and power. However,... VIEW ESSAY

The Spanish Romantic drama Don Juan Tenorio rebelled against rigid neoclassicism, with its principal theme of religious salvation through love. However, many of the themes in Don Juan Tenorio are focused on societal critiques of the time period. An analysis of the Don Juan character is complicated by the necessity to define the works of... VIEW ESSAY