Everyone views life differently since no one is the same. In the poem, “Boy with His Hair Cut Short” by Muriel Rukeyser, and in the story, “Furniture Art” by Sarah Miller, show the realistic views of two different characters about life. Comparing both stories, the sister in “Boy with His Hair Cut Short” has a lest realistic view of life than Mr. DuPont’s in “Furniture Art”.

The “solicitous tall” (line 9) sister in “Boy with His Hair Cut Short” pretended to be optimistic during the Great Depression of the 1930s.

Don't use plagiarized sources.
Get Your Custom Essay on Realistic Views of Two Characters About Life Just from $13,9/Page

The sister did everything she could to help her brother: “[cut] his hair with her cheap shears”, “[new-pressed] his decent suit”. (line 10, 21) She cut his hair to encourage him that he can find a job if he changed his look. “You’ll surely find [a job], they can’t keep turning you down; the finest gentleman’s not so trim as you!” (line 17-19) Even though, she told his brother to be hopeful, she knew that find a job was impossible because her fascal expression cannot lie.

“The impersonal sign, her motion, the blue vein, bright on her temple, pitifully beating.” The sister did not truthfully told her brother her actual view of life, perhaps to raise her brother’s hope of finding a job, but this proved she was being unrealistic.

Mr. DuPont in “Furniture Art” was a strong French accent man of about sixty who “live off unemployment”.(Para. 2) He was a artist with strange style: “walls [filled with] murals of bright colors”, “furniture was a mess, paint-splattered and arranged in unconventional patterns”. (Para. 6) When asked about his opinion about the world, he asked the narrator for her opinion first and when the narrator said that the school “say unemployment’s down and economy’s booming”(Para. 12). He interpreted her answer by asking the narrator that “are people more happy [with the booming economy]?”.(Para. 18)

This shown that he cared more about the happiness in people. Mr.DuPont was trying to teach the narrator to have her own point of view. For example, he told the girl to look at the furniture as art and that economy and quality of life is not the same thing. He believed that by opening our eyes to the world meaning that we should look at the world in many different prospective. Mr. DuPont taught the narrator to view the world in her own side, instead of viewing the world through the school’s or nowaday’s sociality side.

Comparing both poem and the story, Mr. Dupont has a more realistic view of life than the sister in “Boy with His Hair Cut Short”. Mr. DuPont taught the narrator to observe the world in her view, not in the school prospective. While the sister only encouraged the brother that he will soon find a job, even if she knew the possibility of finding a job was low. Mr. DuPont cared about the happiness in people rather than the improvement in people life. He did not cared what people think of him and did not followed people’s taste in furniture. Mr. DuPont has his own view of life and own style. On the other hand, the sister only hid her own view in her brother’s situation and helped her brother in any way she could. She encouraged her brother to keep trying but overall she did not told her brother anything about her view of life.

Mr. DuPont has a more realistic view of life than the sister because he thought we should open our eyes and looked at the world in our view rather than in other people’s view. He was a strange man but who has his own view in life. Mr. DuPont was different from anyone in the sociality while the sister like everyone during the time was trying to make life better by viewing it optimistically. 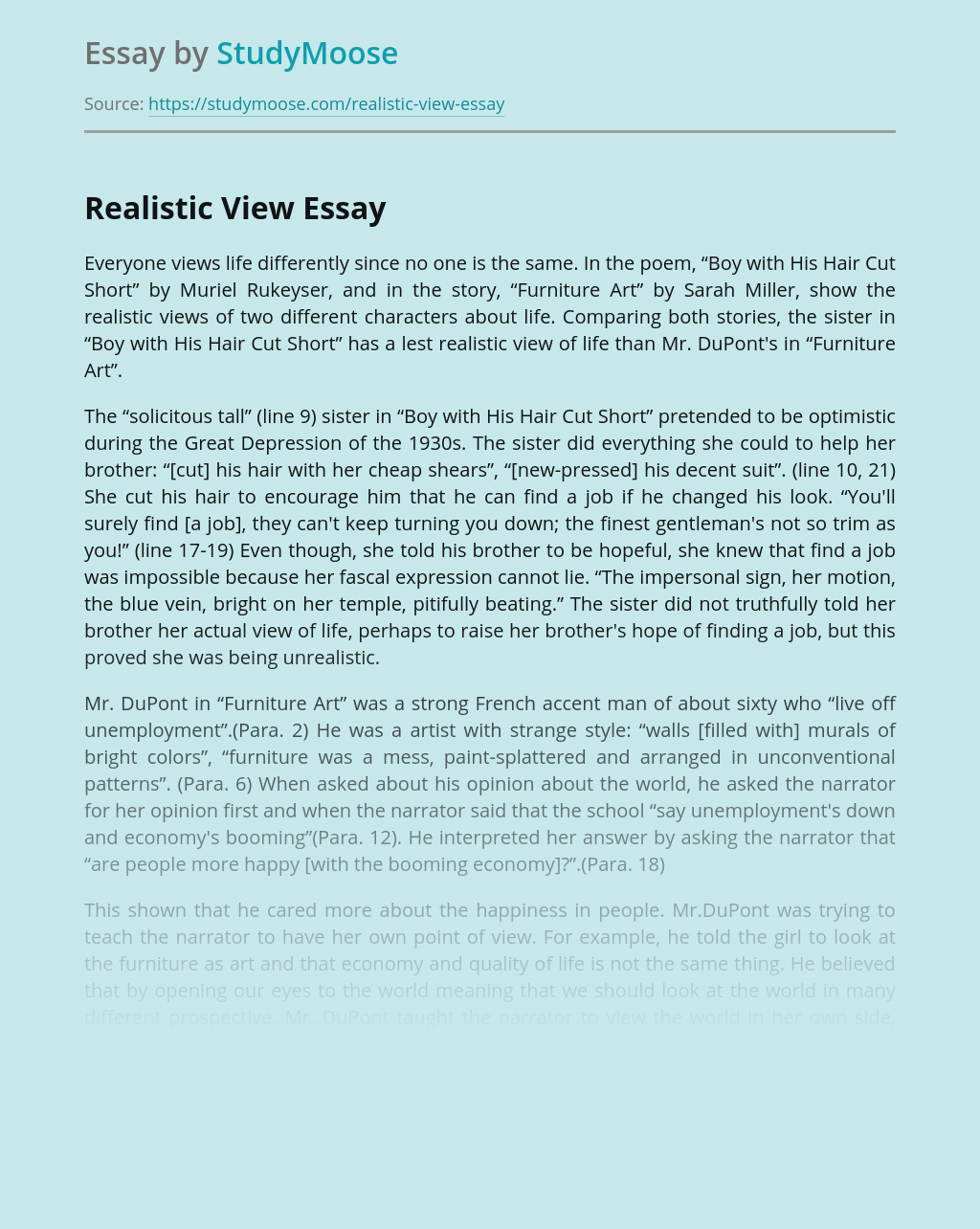 In today’s market it is very important for company’s to remain competive in order to maintain an edge over its competitors. The days that a company can rely on its reputation to continue making profits are gone. Today, everyone is looking to save money by buying less expensive items like economy brands, considering that the...

Synthetic fibers are made from synthesized polymers or small molecules. The compounds that are used to make these fibers come from raw materials such as petroleum based chemicals or petrochemicals. These materials are polymerized into a long, linear chemical that bond two adjacent carbon atoms. Differing chemical compounds will be used to produce different types...