The idea of the Australian stereotype is one where each individual will have something different to say about it. On one hand, the national stereotype will be glorified and held above the rest by things such as the advertisement “Where the bloody hell are ya? ” On the other hand, the national stereotype can be shamed and seen as a disgrace when events such as the Cronulla riots in September 2005 took place. Some of the most important factors to think about when considering what the idea of the Australian stereotype is seeing the way in which Australians are stereotyped.

Don't use plagiarized sources. Get your custom essay on
“ Real Thing and Myth in Australian Stereotypes ”
Get custom paper
NEW! smart matching with writer

And also looking at if the Australian stereotypes are used genuinely and how these stereotypes affect the people who don’t fit the description. PARA. 1 Australian and Australians are stereotyped in a way where there are only two totally different extremes of stereotype. We can see this in the example of the advertisement “Where the bloody hell are ya? ” made to try and sell Australia to overseas consumers; by using images such as the beautiful Whitsundays and the outback instead of the everyday suburban housing and workplaces.

However in the Cronulla riots Four Corners report by Liz Jackson in 2006; the Australian stereotype is seen to be one of violent destruction, an Australian was made out to be an over-reactive, wild youth in a racist community. While the average Australian male works 5 days a week, from 9am until 5pm. Who drives his wife and children in his Ford Territory, spending his weekend catering to his children’s needs and watching the football.

But whenever this average male, goes into town with his mates and bumps into some international tourists; they will only ever talk about how beautiful Australia is, or how wild Australians are.

I intend to isolate the Australian stereotypes as well as the actual average Australian to explain the difference between the myth of Australia and the real thing. My essay directly challenges the stereotypes presented in the “Where the bloody hell are ya? ” advertising campaign and the Cronulla Riots Four Corners report by Liz Jackson in 2006. I wrote for an educated youth audience and therefore the language used will be of which can easily be related to and comprehended. I wrote in a simple tone, exaggerating the key points of difference which I planned to make clear to the audience and therefore convincing them to agree with my view. 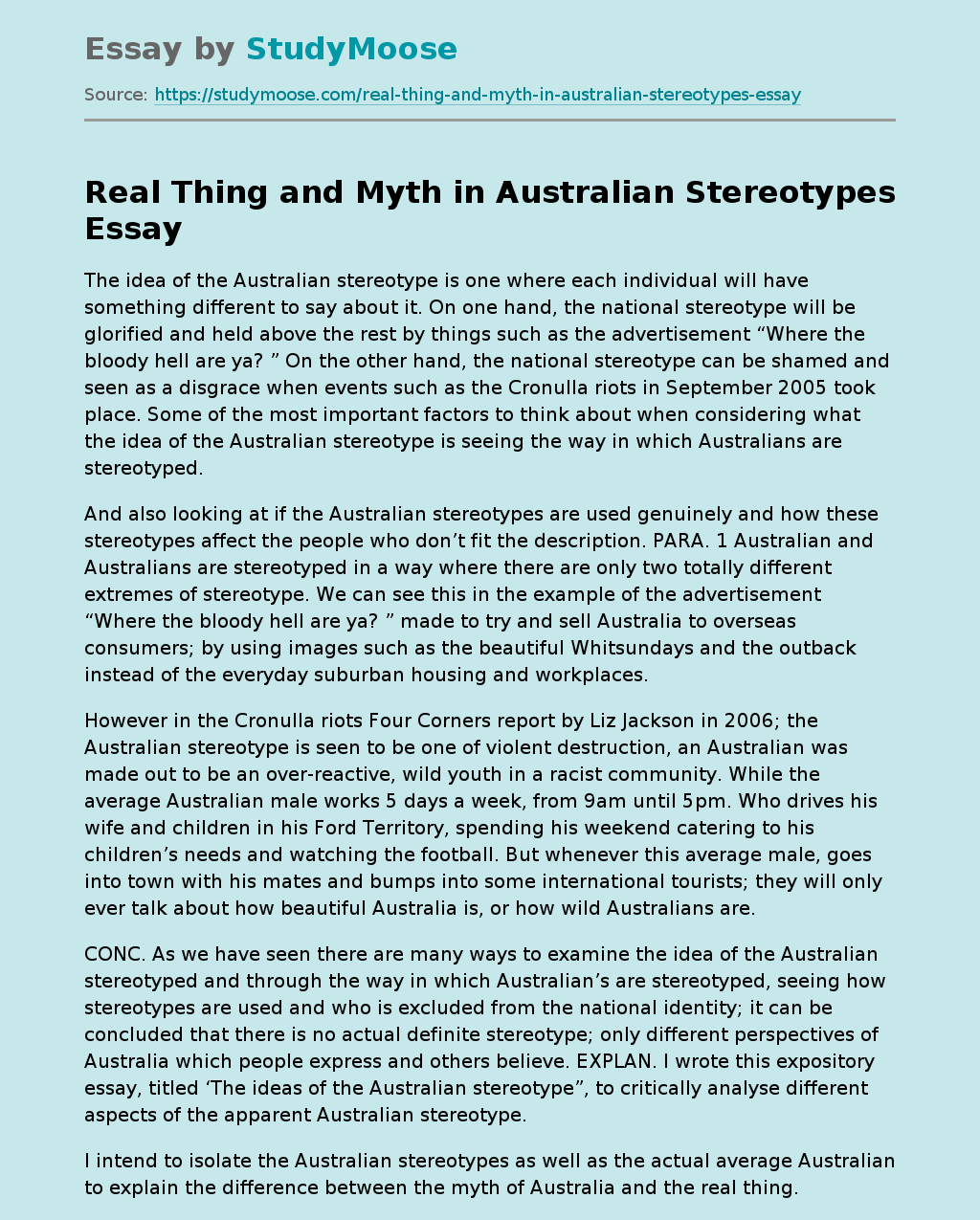