“Hangga’t buo ang ating pananalig at tiwala, at hangga’t nagsisilbi tayong lakas ng isa’t isa, patuloy nating mapapatunayan na, “the Filipino is worth dying for”, “the Filipino is worth living for,” at idadagdag ko naman po: “The Filipino is definitely worth fighting for.” This is the highlight of the fifth State of the Nation Address by His Excellency Benigno Simeon Aquino III. The stand of believing in the democracy, believing that people with the government can make a change within his term.

Don't use plagiarized sources. Get your custom essay on
“ Reaction Paper on SONA 2015 Speech Presentation ”
Get custom paper
NEW! smart matching with writer

Since the death of his parents, the legacy still continues and I guess the legacy is in his heart believing that it’s not too late for changes in the Philippine government setting and also the economic and social status of the country. Based on the past State of the Nation Address of President Aquino, critics said that, this State of the Nation Address is not clearly stating the change that they expected to be. The changes within his term is expected to be evident and must lift the Philippines from being the “Sick Man of Asia” to the “Rising Country in Asia”.

But for me, I guess for about 5 years of his term, I find him and his works in making everything possible is evident through his achievements. For the past five years, the system of education through his leadership is I guess changed and globally leveled the foreign and international standards. An example of this is the Technical Education and Skills Development Authority (TESDA).

The Disbursement Acceleration Program contributed 1.6 billion pesos to TESDA’s Training for Work Scholarship Program. This amount enabled the graduation of 223,615 beneficiaries. 66 percent of these—or, 146,731 graduates—now have jobs. This is just one of the amazing changes that he and his leadership has made differences from the past administrations. Also, the poverty in the Philippines, not although changed bigtime but I guess through the little steps, we can make change. We must invest in our most valuable resource: The Filipino people. Data from the National Economic Development Authority attests to this success.

According to them, the 27.9 percent poverty rate during the first semester of 2012 went down to 24.9 percent for the same period in 2013. These three percentage points are equivalent to 2.5 million Filipinos who have crossed the poverty line. There are still many achievements that the President stated and had attest his success, or should I say “OUR” success. The Filipino people must help and also lift themselves up if they want change in the society, the government and also their own lives. Just like what the President said, “Give a man a fish and you feed him for a day. Teach a man to fish and you feed him for a lifetime.” The change must also come through the ideals of change by the people. I guess, if we want a change, a more evident change, it must come from the people. Helping themselves first, making themselves worthy for the society, and through this they can make change, with the partnership of the President and the government. After all, this is a “DEMOCRACY”, by the people, for the people. 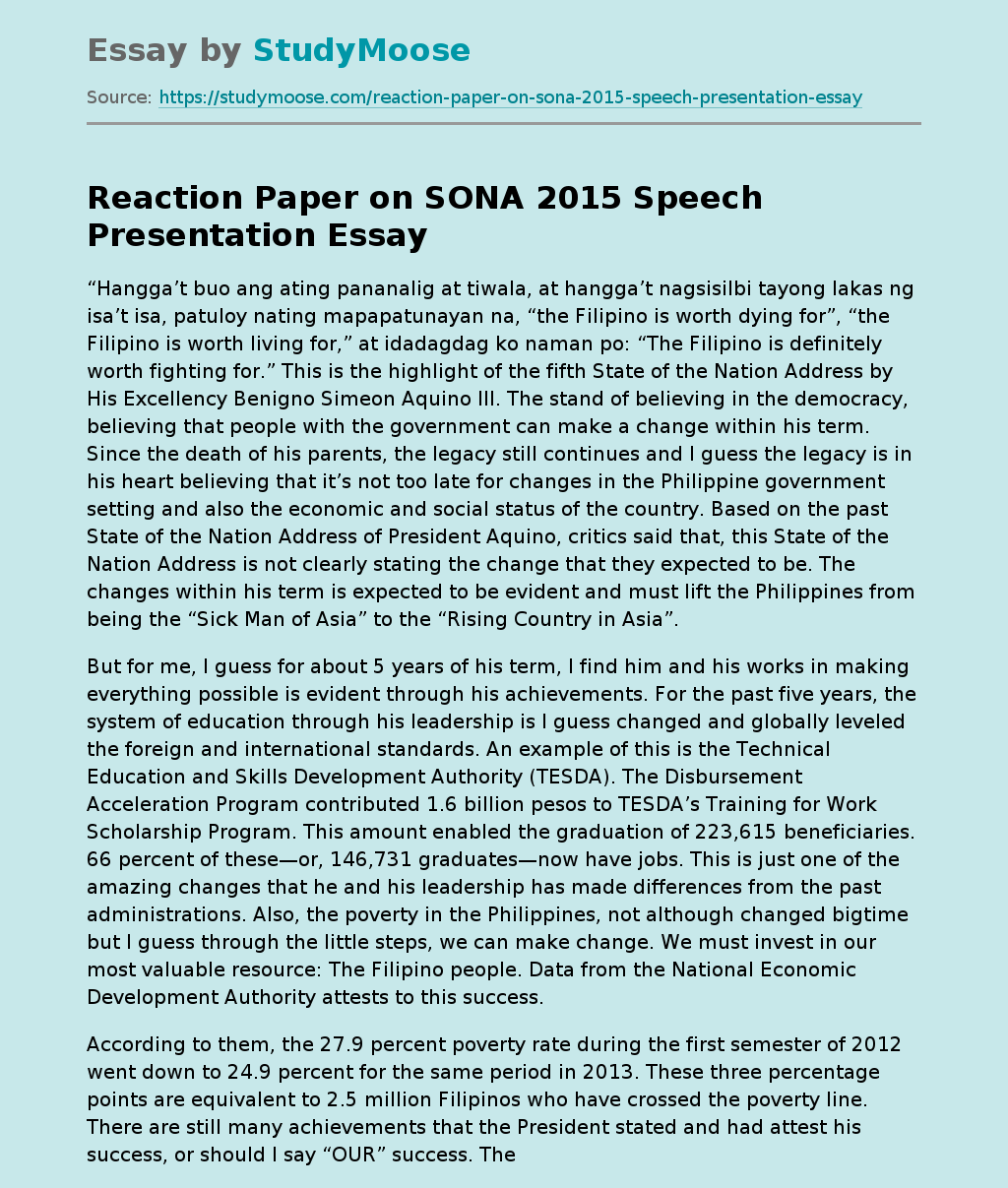