Don't use plagiarized sources.
Get Your Custom Essay on Reaction Paper: Oedipus the King Just from $13,9/Page

Dramatic unities: unity of actions, unity of time, unity of place. Unity of actions, it is the casual connections of events and incidents; unity of time, it is a concept that the tragedy should confine itself as far as possible, to a single revolution of the sun; unity of place, it is a concept about the epic, the epic can narrate the number of actions simultaneously in different parts. These concepts was shown by the story, it simultaneously narrate the actions and also with connections in every scene; it also achieve the unity of time by making all the scenes looks like happen in just a day.

Tragic hero, it was describe as a great man who is neither a paragon of virtue and justice nor undergoes the change to misfortune through any real badness or wickedness but because of some mistake. The tragic hero in the story is Oedipus.

Hamartia, it may be accompanied by normal imperfection, it was describes as a situation where the hero makes an unintelligent act where you cannot immorally blame him/her. This concept can be seen in the story when Oedipus gets angry on the prophet because of saying he is the one who kill Laius.

Hubris, it was describe as the obstacle that the tragic hero will encounter to achieve his goal. This was happen in the story when Oedipus was trying to know the truth, the herdsman didn’t want to talk.

Peripeteia, it is the human actions made results exactly opposite to what was intended: it is working in blindness to one’s own defeat. This was seen in the story, it is when Oedipus tried to escape the prophecy, but while escaping, he killed his father where 3 roads met.

Anagnorisis, it is the realization of truth, it is the opening of the eyes, sudden lighting flash in the darkness. This concept can see in the scene when herdsman tell the truth, and Oedipus was shocked, even Jocasta; Oedipus made himself blind, while jocasta committed suicide.

Catharsis, one of the most difficult concepts in poetics of Aristotle, describes as the purging of the emotions of pity and fear that are aroused in the viewer of a tragedy. You can see this in the story, it happens in the scene where the herdsman was forced by Oedipus to reveal the truth; he was scared on how Oedipus will react.

As a whole, the story is great. It touches the heart of every reader, and after reading this text, you wish that destiny will not happen to you or your friends and family. A nice text, must read. 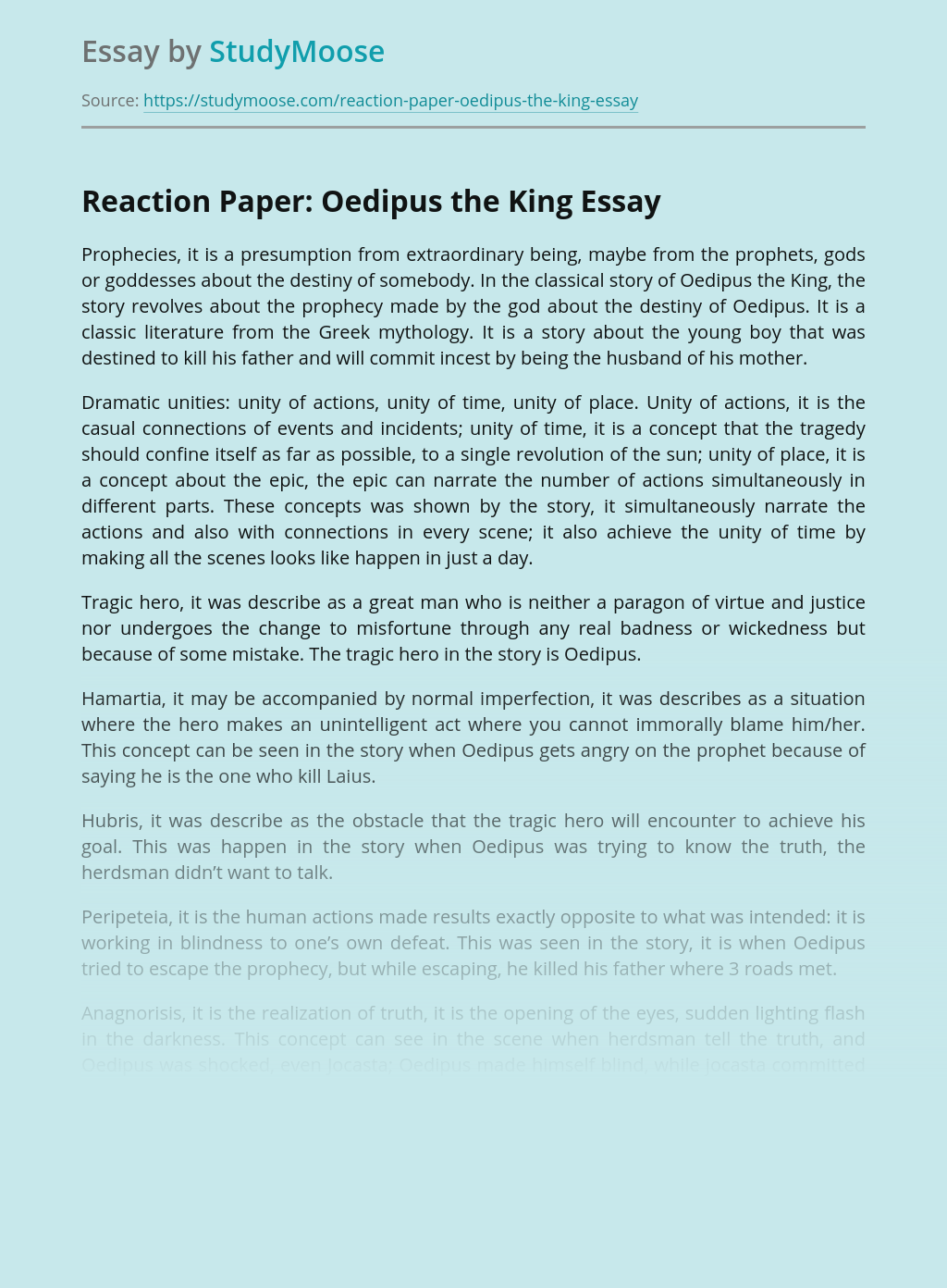 Get Essay
Passion and responsibility in Edith Warton's "Ethan Frome"

Rate this post Set in 1881 Starkfield, Massachusetts, Edith Warton’s _Ethan Frome_ reveals a recurring theme found in literature: “the classic war between a passion and responsibility.” In the novel, published in 1911, protagonist Ethan Frome confronts his two private passions, his desire to become an engineer that conflicts with his moral responsibility to his...

Rate this post The fantasy like short story “The rocking horse winner,” is about a young boy who believes that if he has more money he will be more loved by his mother. The author, D.H. Lawrence develops a theme throughout the story that money and social status can be a destructive force. The story...