One of the key parts of this piece of drama is the quotations used. In verbatim theatre you can only say things that have been said before, whether in an article, interview or other form of media. Our piece is centred on the London Riots which were extensively reported on in 2011, so we had a lot of reportage to choose from for our research. Various members of the group gathered different types of research which we found online; some got articles, others found direct quotes from rioters or people affected.

Don't use plagiarized sources. Get your custom essay on
“ Verbatim Theatre ”
Get custom paper
NEW! smart matching with writer

I decided to get some different types of research to use, so we could have different things to get inspiration from. We used part of an article from Wikipedia to help create our first scene by using short quotes to introduce what happened to cause the riots to happen. These short quotations worked well to quickly give background information before moving on to more detailed scenes.

One piece of research which I thought was really interesting and could be used in a creative way was a running commentary of quotes said by a rioter during an interview.

To get the quotes I had to watch a video and write down what was being said as there wasn’t a transcript that I could use, which meant I could also see how they spoke and utilise that when we worked on that scene. Picking up on the intonation was useful to make the characters seem more realistic with their speech and body language.

We started to work with this research to come up with a scene involving the interview quotes. We experimented with a few different ways before deciding to almost recreate the actual interview; a reporter and the other actors all being rioters. This also showed how the rioters overpowered the reporters and other people, such as the police, as there were more of them. We also incorporated another quotation into the piece to show how different rioters acted. This research was used quite effectively as it helped us to come up with a new scene that looked professional and as if it could have actually happened.

We also used other group members research – by having multiple pieces of research to draw from, it means we can create a more diverse piece as we have more options. We found similar articles that we could join together to create a scene which means we could get more quotations in even though they were from separate articles. The scene we created with the Boris Johnson quotations was original and I think it incorporates the group as an ensemble too as we all have to rely on each other to do what they need to do. Another scene with someone else’s research was the second scene; we used quotations from a Wikipedia article in a unique way to show how the riots spread, in a creative format. In the scene we have to work as an ensemble so we know when we have to speak as we’re not able to see when others are speaking. This research worked well because it got the message across and enabled us to think of creative ways to portray it.

How effectively are you personally exploring and developing your role(s)? For this devising work we are using a lot of Brecht techniques to help make it more non-naturalistic. One way to do this is by multi-rolling; where an actor takes on different roles within the same play. So far we have mainly got short scenes that we need to pull together but still have various roles to play. One of my roles is as a news reporter, which is quite interesting because some of the reporters were down in the action and being affected by the riots, not just sitting in a studio somewhere. As a news reporter I had to use quite sophisticated quotes that gave a lot of information so I am trying to develop my character so people will want to listen to it. I have developed one of my news reporter parts as the reporter was outside a shop that was being looted so I used intonation and varied my tone to show how he could have been feeling; worried and scared about what was happening, but determined to do his job and inform the public.

Another one of my characters is as a rioter. I think the rioter characters are the most interesting because the actual rioters weren’t all flat out rioting for the fun of it, some had their own reasons. It’s interesting to research and find out about different people and how they acted. Creating a realistic role as a rioter is quite difficult because it’s easy to go stereotypical but with the research I’ve found videos and pictures that will help me create the rioter characters as realistically as possible.

Our work also features a lot of choral work where we work as an ensemble to create imagery and movement. Group movement and group speech is quite difficult to get all in time with each other but when we work on it, it looks very effective in creating images for the audience. For a lot of these parts we don’t have specific characters and are just part of the chorus, but it’s still important to develop a role and not break character. In this case, the character is part of an image.

How did you and your group explore the possibilities of form, structure and performance style? When creating our scenes, we decided to not focus on a sole narrative running through the play because we felt like it would limit our ideas to fit them into the narrative. Instead, we have gone for a multi-perspective structure with various scenes and point-of-views so we can use a larger array of research to get a lot of different ideas. I think this structure works effectively because we can try out different ideas and if they don’t fit, it doesn’t affect the rest of the play as much as they’re not all directly linked. However, we have made links between scenes to develop the ideas to show different techniques or ideas. A lot of the work for the verbatim theatre is based on Brecht and his techniques with non-naturalism. We have discussed and used a lot of these techniques in our work to develop it further and shape our ideas into more non-naturalistic styles. Some examples of these techniques are:

* Narration: We have used a lot of narration with the scenes that include reporters to show the information in a way that is easy for the audience to understand, without distracting from the main movement that is happening behind the speaker. This is also directly addressing the audience at some points by making eye contact with the audiences to bring them in; and then distancing the audience by switching character or scene so they can’t get attached to the characters.

* Slow motion: One of our scenes uses a lot of slow motion to bring the attention to the action whilst someone is narrating the action at the front of the scene. The slow motion also adds more tension and makes the audience focus on what’s happening as all the movements can be seen clearly. We also incorporated tableau vivant in with slow motion in the section where some of the group are rioters trashing a shop. This also included us working as a group to get the actions at the same time so that it flows smoothly. 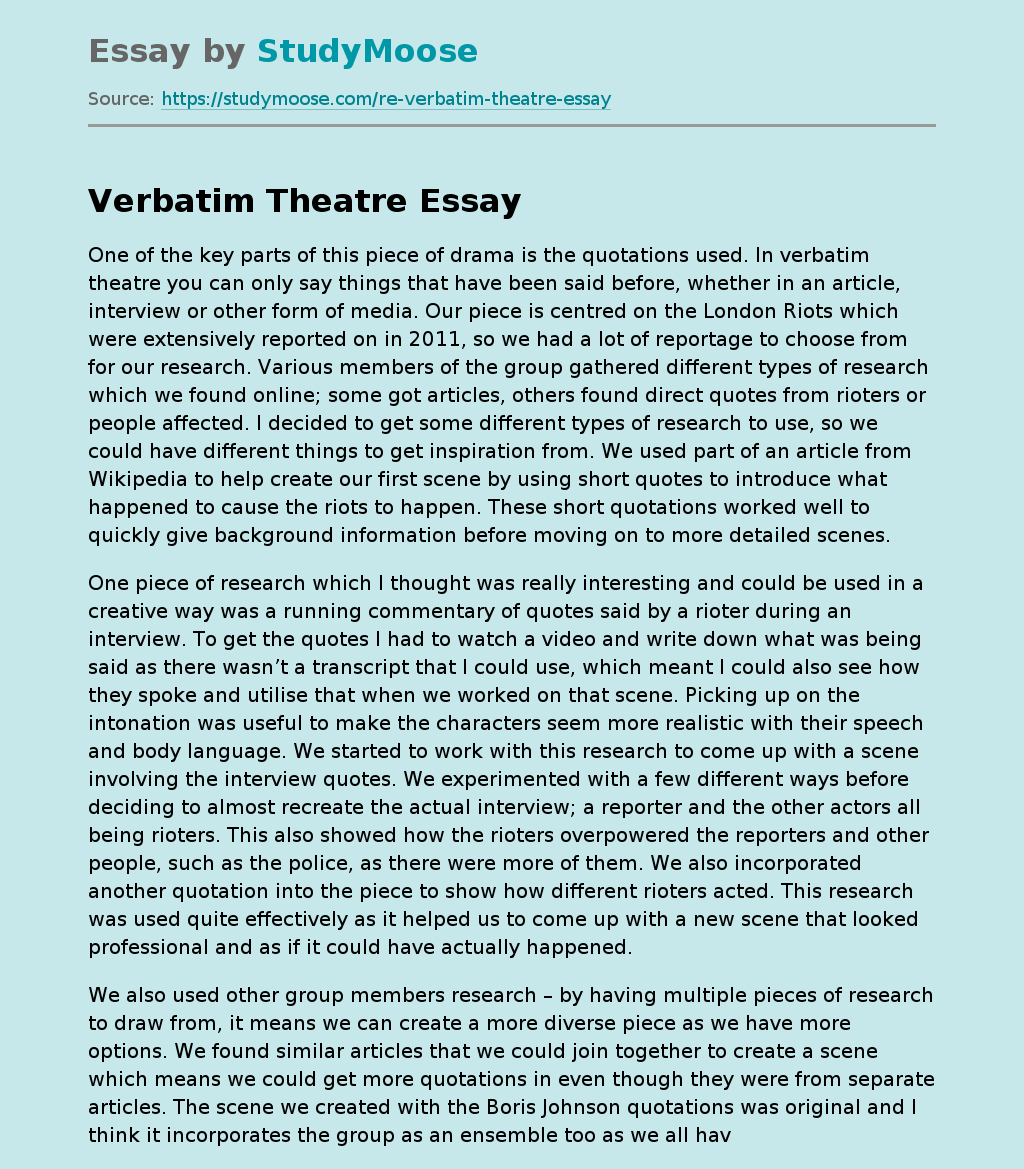