In this age of digital handhelds, mobile communication, instant messaging and the twin mammoths of information technology and virtual omnipresence afforded by the world wide web, ‘uncertainty’ seems hardly a notion that requires our deliberate attention anymore. And terms like ‘alienation’ and ‘communication’ are used in lesser instances of proximity to each other. These words however, do exist and operate as a matter of certainty in today’s reality. Uncertainty, it would seem, is what compels most of us to communicate and engage in conversations.

Don't use plagiarized sources. Get your custom essay on
“ Uncertainty Reduction Theory ”
Get custom paper
NEW! smart matching with writer

Charles Berger and Richard Calabrese postulated that uncertainty and the nagging presence of the unknown is what compels people to take certain steps towards making it known, thereby ‘reducing uncertainty’ through the act of communication. The theory’s concept rests mainly on the initial and primary phases of interaction, when we know little about the person we are about to engage in a conversation with, and we go through measures of conversing with the other person in a way that will reveal what we don’t know about him/her.

Asking for instance, his/her name primarily, then proceeding to other familiar introductory questions, and so on. Berger notes seven points or axioms which the theory revolves on, and they are as follows: (1) As verbal communication increases, uncertainty decreases. A concept made obvious and tangible on frequent instances where we meet strangers, speak to them, exchange thoughts and ideas, and in the process, find them crossing boundaries of unfamiliarity into the realm of acquaintances, and eventually, friends.

This particular point is best exemplified in gestures that we make, when we go against the facade of indifference and resort to congenial gestures and expression which makes the other feel welcome; despite the absence of verbal communication, instances of discomfort and uncertainty will decrease. (3) As uncertainty increases, information seeking increases. Uncertainty is the urge that motivates us to pursue familiarity and information from the stranger or acquaintance in question, the more we know little or nothing about the other person, the likelier we are to ask questions about them.

Conversely, when uncertainty does decrease, information seeking follows. (4) As uncertainty increases, intimacy decreases. Naturally, when we know little about the other individual, we are less likely to share our thoughts, ideas, and opinions with them, much less a room or apartment. (5) As uncertainty increases, reciprocity of self-disclosure decreases. Which, in simpler words basically mean that we are reluctant to engage in conversations about ourselves when congruently, we aren’t getting that from the other person either. (6) Similarities reduce uncertainty, and dissimilarities increase uncertainty.

We become more familiar with people whom we share particular characteristics, ideologies or interests with; when we don’t share these similarities and regard what they are predisposed to as something completely foreign, we move back to unfamiliarity and ultimately, uncertainty. (7) As uncertainty increases, liking decreases. Finally, as we grow less certain of the other individual in question, the tendency or probability of liking them diminishes. Conversely, when uncertainty does decrease, ‘liking,’ as a matter of principle, increases. The aspect of ‘uncertainty’ is evidently present in each of these axioms.

Berger notes uncertainty as a core element of communication; one which largely affects the process of social interaction from inception to exit. Aside from the previously stated axioms, Uncertainty Reduction theory also incorporates three tactics or means of approach which most people usually take with regards to meeting and making acquaintances. The first of these tactics uses the term Passive Strategies, an approach where we gather information about the other person or stranger in the process of increasing familiarity, through observation.

Common examples of this strategy would include watching an athlete or actor in a game or play; and also, stopping by a bench in a park and observing people as they walk their dogs, play frisbees, feed the ducks in the pond, and so on – to obtain cursory knowledge and information about that particular person. The second tactic, a more hands-on approach, is called Active Strategies, which, as the term implies, is quite the opposite of the first tactic.

The person who is interested in gathering information on another individual pursues it by asking and talking about the individual in question with another individual, or taking similar measures of indirect interaction in order to find out more about the person they want to be familiar with, as opposed to passively observing them. The third and final tactic, referred to as Interactive Strategies, – and by far appears the least complicated of the three – resorts to conversing directly with the unfamiliar individual in question, engaging in asking him/her questions, and carrying out a conversation.

The aforementioned axioms and tactics which build up and serve as key components of Berger’s Uncertainty Reduction exists not only in theory, but as noted in their corresponding examples, in our daily dealings with people and the rest of humanity as well. Communication, as we very well know, is an inescapable aspect of human existence. Verbal, non-verbal, written, and otherwise; people believe in self expression, reciprocation of opinions, and the traffic of thoughts and ideas.

When people are unable to participate in this traffic of interaction and communication, unable to convey their individual meanings, or harbor a reluctance in self expression, they are distancing themselves from effectively communicating with other people, thereby leading to estrangement or alienation. Alienation is an interesting subject clearly at odds with the concept of communication. ‘Communication’ and ‘alienation’ are two evidently contradicting terms which fall on opposite ends of the spectrum, but at the same time, relate to how each other comes into being and ceases to become so.

It has generally been regarded in most social relationships that lack of communication leads to disaffection and estrangement. Alienation exists because of poor communication skills, and the lack of motivation to take certain measures in preventing it. Berger illustrates that by conversing with other people, we are increasingly blurring lines of uncertainty, a notion that can be found congruent, synonymous, and applicable where alienation is concerned. Across the globe, people are alienated because of various rifts and differences in culture, ideologies, race, social background, upbringing, and so on.

What they are failing to do is address these differences, and at the same time acknowledge similarities that do exist, if only people talked about it enough. When people arrive at these realizations, alienation is bound to cease. The sphere and extent of communication has its own set of theories and complexities, but its virtue is fundamentally quite simple. Expression and social interactions are important, and we should be able to engage in various instances of it, for our sake, and everyone involved.

Ultimately, life in the planet we live in today is a medley of differences in thoughts, opinions, ideologies; communication and miscommunication; alienation and acceptance; uncertainty, familiarity; and varied meanings each one of us has a different way of expressing. It wouldn’t hurt to incorporate another person’s persuasions into our own. We should seldom hesitate to engage in social interactions with other people, be able to push away facades of indifference and in the process, distance ourselves and other people from alienation. By doing so, communication will serve as an effective two way street, where ideas and 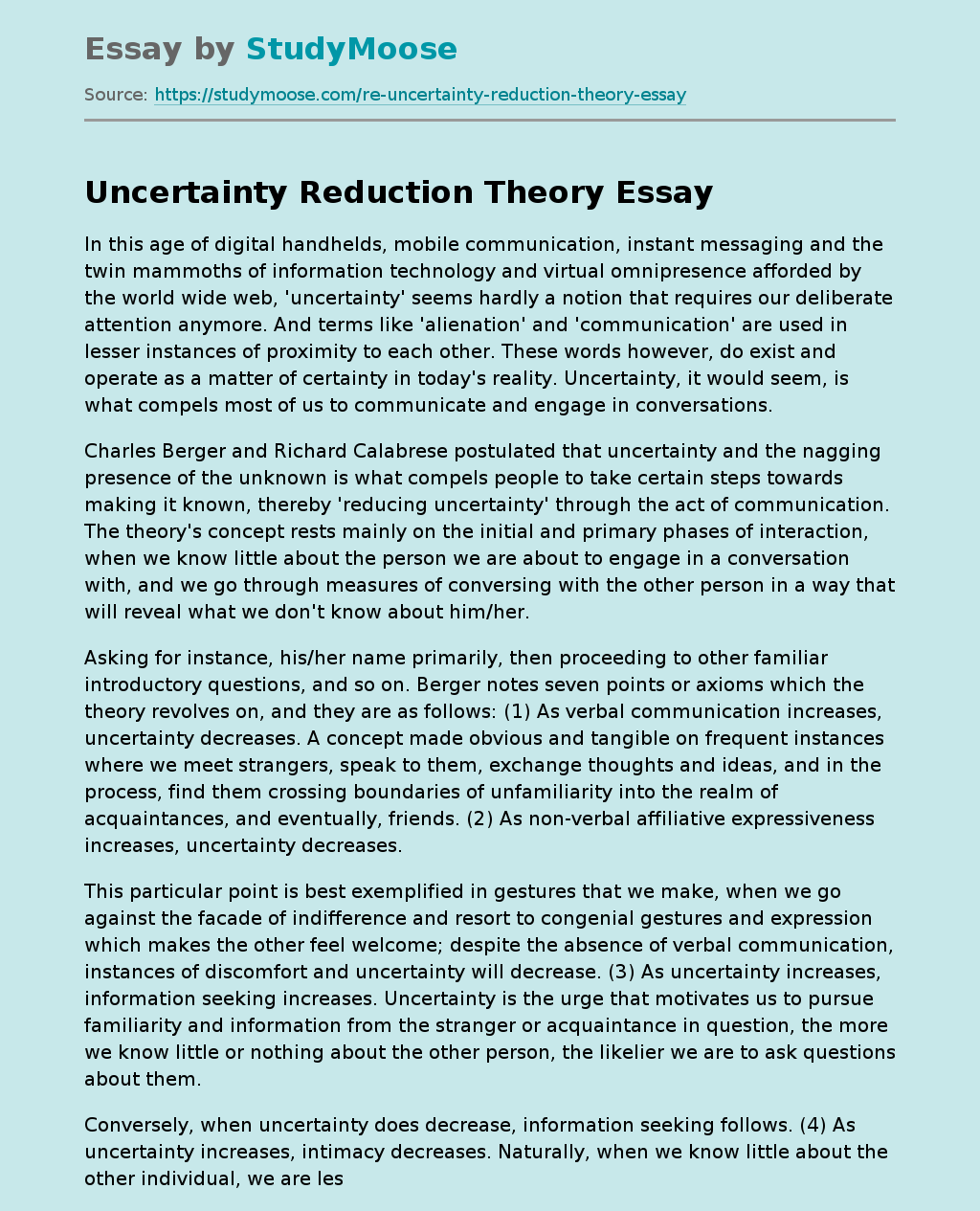