Tyranny in Our World

Tyranny is an abuse of power over others by a person or government. One example is any government which has too much power and restricts the rights of its people. A different type of tyranny is when the will of the majority restricts the rights and freedoms of individuals in the minority. For example, slavery in America was developed by the white majority in the South, to assure that their economy would succeed. Tyranny of both types mentioned still exists in the world today.

Don't use plagiarized sources. Get your custom essay on
“ Tyranny in Our World ”
Get custom paper
NEW! smart matching with writer

The phrase, “Tyranny is still common in the world today,” is obviously true. In an essay addressed to the Soviet leadership in 1968, Andrei Sakharov warned that any society that restricts intellectual freedom and prevents the free exchange of ideas would be unable to compete with societies that unleash the creative potential of their people. So wrote Sakharov when he warns about repression in the USSR, which finally dissolved into smaller nations, because of the abuse of power.

Proficient in: Our World

Even in the US we have repression.

Freedom to explore ideas and our creative potential is not really allowed under our current educational system which trains students to be good slaves of the system. Even in our communities, we chastise others who do not blend in to the “common” cultural view point. Is this freedom? How can anyone think that tyranny is not alive and well today? Incidentally, in the area of religion, there is obvious tyranny which expresses itself as “my religion is better than yours.

” So as you can see, there is tyranny in just about every aspect of modern life.

Concluding, anyone who thinks that tyranny is somehow finished due to the existence of the US Constitution and its clauses which protect individual freedom, will inevitably be rudely awakened one day. The ability of humans to ruin great ideas and descend into slavery, real or institutionalized, is truly one of the wonders of our world. Tyranny will always be a threat as long as people roam the earth.

Tyranny in Our World. (2016, Jul 06). Retrieved from https://studymoose.com/re-tyranny-in-our-world-essay 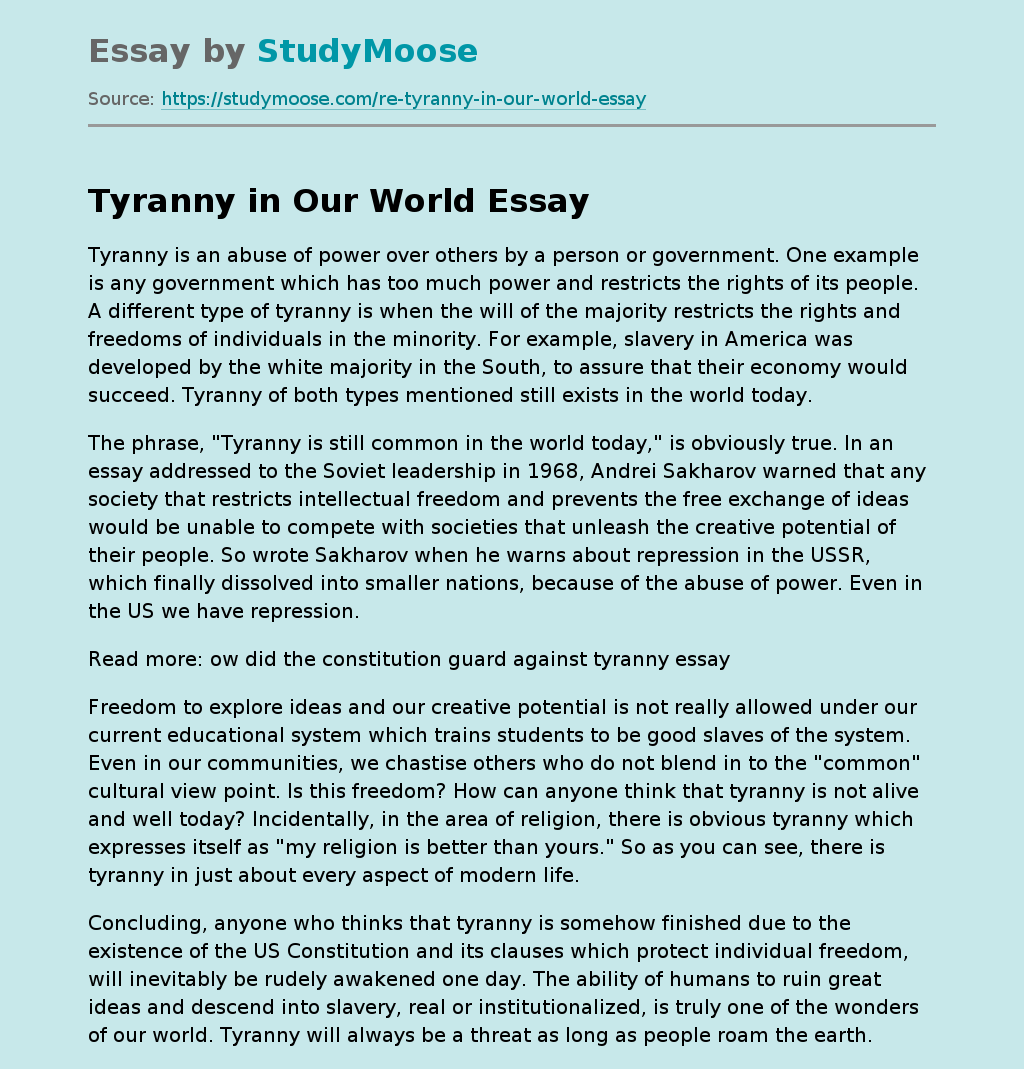