To what extent can preparedness and planning mitigate the effects of tropical revolving storms?

Don't use plagiarized sources. Get your custom essay on
“ To what extent can preparedness and planning mitigate the effects of tropical revolving storms? ”
Get custom paper
NEW! smart matching with writer

The impacts however can vary in severity due to a range of human and physical factors. The human factors include how urbanised the area affected is, as built up cities tend to have impermeable surfaces which increases run-off and worsens the floods that occur. These impermeable surfaces replace trees and vegetation via deforestation which would intercept the rain and store it in the soil, allowing it to be released over a period of time and avoid severe flooding.

Other human factors include warning systems put in place to predict incoming storms and inform the public about them. This can be linked in with the effectiveness of the government, as governments in developed and stable countries often deal with disasters more effectively than governments in less developed countries.

However, regardless of the human factors, the physical ones are out of our control and can mean the difference between a serious storm and a devastating storm. The most obvious one is the size of the storm, which can affect how widespread the storm is, the duration of which it lasts and the intensity which it impacts the area.

The power of a storm is directly proportionate to how long it has spent over the water and how far it is from water, meaning it loses intensity as it moves further inland.

Modern technology can greatly reduce the impact of tropical revolving storms. In the USA and other MEDCs, monitoring by satellite and aircraft permits accurate tracking and forecasting. This allows governments to evacuate populations at risk. Storm surges can be countered by the construction of levees and surge barriers, and residents in areas exposed to revolving storms can be educated to minimise the risks to themselves and their families.

Because revolving storms often develop over extended periods (1 or 2 weeks), unlike other natural disasters (e.g. earthquakes, volcanic eruptions) responses by government agencies can be carefully planned to mitigate their impact. However, these responses are often less effective in LEDCs and the impact of tropical revolving storms in terms of loss of life is much greater.

In regards to Hurricane Katrina we should acknowledge that the impact of the storm was great because of its size and intensity, however this impact was compounded by human failings, such as below standard weather warnings and prediction systems. Good management might be able to lessen the blow of disasters, but cannot eliminate them completely. Nevertheless, it is clear that better coordination among the network of responders, a greater sense of urgency would have led to a more successful evacuation and helped to control the impact of the storm. However, in the aftermath of the storm, the U.S government did make drastic improvements to its weather prediction systems in a bid to avoid another storm as devastating.

To what extent can preparedness and planning mitigate the effects of tropical revolving storms?. (2016, May 26). Retrieved from http://studymoose.com/re-to-what-extent-can-preparedness-and-planning-mitigate-the-effects-of-tropical-revolving-storms-essay 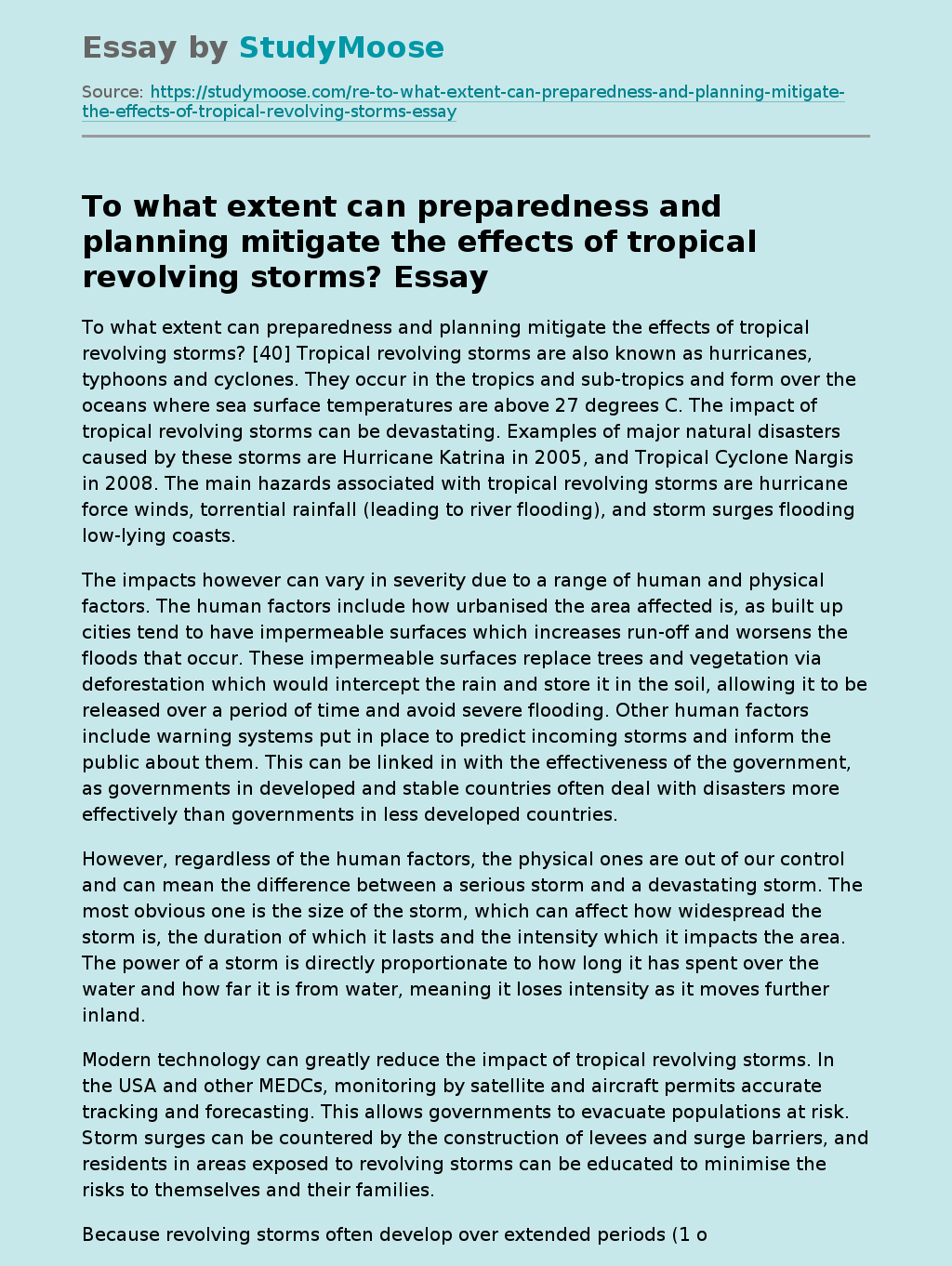