To suck the Marrow out of Life: Transcendentalism in Dea Poet's Society

The 1989 film Dead Poets Society revisits transcendentalism. In it, several boys attending a staunch private academy are deeply affected by their new English teacher Mr. Keating, or “O Capitan, My Capitan” as he dares them to call him. He wants them to, “carpe diem” or seize the day. Some of the boys begin meeting in a cave just off school grounds to, not only read poetry, but to “suck the marrow out of life.” Each secret meeting of the Dead Poet’s Society is invoked with a reading of a famous passage from Thoreau’s Walden, “I went to the woods because I wished to live deliberately, to front only the essential facts of life, and see if I could not learn what it had to teach, and not, when I came to die, discover that I had not lived” (72).

Don't use plagiarized sources. Get your custom essay on
“ To suck the Marrow out of Life: Transcendentalism in Dea Poet’s Society ”
Get custom paper
NEW! smart matching with writer

Over the course of the film, most of the boys come to act on Thoreau’s principles and begin to, “[suck] the marrow out of life,” as Mr.

Keating, paraphrasing Thoreau, insists they do. A major theme in Dead Poets Society is one of individualism. Mr. Keating’s goal is that his students learn to be free thinkers. He quotes Walt Whitman’s poem, “O me, o life of the questions of these recurring, of the endless trains of the faithless, of cities filled with the foolish… What good amid these, o me, o life? Answer: that you are here. That life exists, and identity.

That the powerful play goes on, and you may contribute a verse.

” Whitman is saying that as much as someone may doubt themself, as insignificant as they feel, they are important. Their existence will change the world. Keating intends Whitman’s message for his students, but ends up contributing a verse to life’s play himself; his messages change his students’s lives forever. Part of transcendentalism is the belief that individuals are lost until they remove the shell of who they think they are. Some of the boys take this to heart.

Two of them find Emerson to be correct in The Poet, “everyman should be so much an artist.” First Neil Perry, forced by his father on the path to becoming a doctor, discovers a deep passion for acting. He tries out and is cast, as Puck in Shakespeare’s A Midsummer Night’s Dream without his father’s knowledge. His roommate, Todd Anderson, a reserved boy also pressured by his family into a career he rejects, leans that he wishes to be a writer. Neither boy stands up to his family. However, as Emerson writes in Self Reliance, “Do not think the youth has no force because he cannot speak to you and me [adults].”

Neil continues in the performance even after his father forbids it, and Todd eventually discovers his conviction, with the help of an English assignment he neglects. They find that they both are, what Emerson called, artists. The boys are still in high school, they have not yet truly begun their lives. Even though it seems Neil and Todd’s entire futures lay out before them, predetermined by their parents, they, as Emily Dickenson put it, “dwell in possibility.” Because Neil and Todd allow themselves to reject their parents’s demands, they see that other possibilities are open, their limits are their dreams.

To suck the Marrow out of Life: Transcendentalism in Dea Poet's Society. (2016, May 28). Retrieved from https://studymoose.com/re-to-suck-the-marrow-out-of-life-transcendentalism-in-dea-poets-society-essay?post 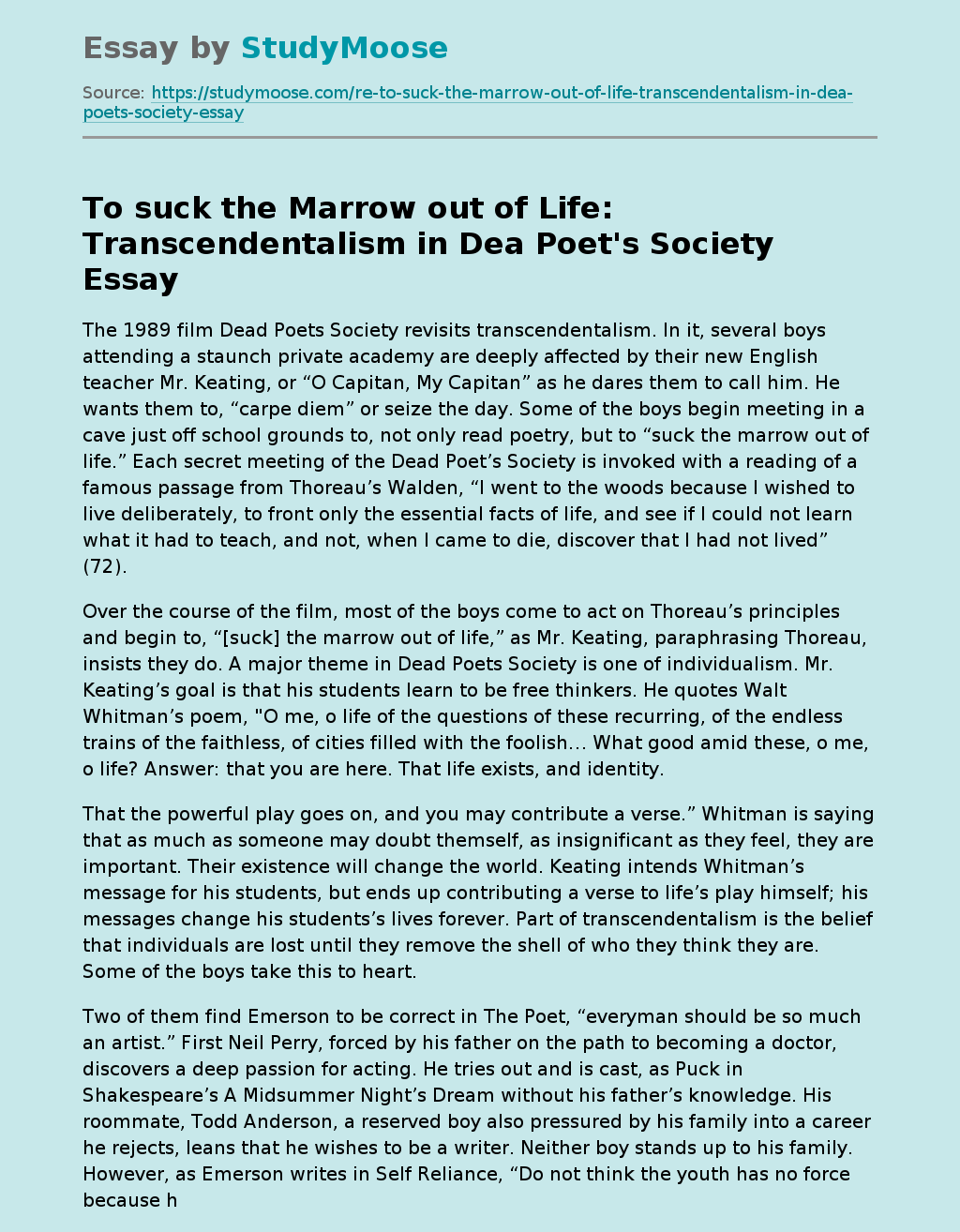