The definition of the word feral children is undomesticated children. It has been a proven case that young children cannot survive on their own in the wild they are merely adopted by animals that choose to love them and want to help the children and teach them their way of life. An animal can sense when they’re in danger but when these children pose no threat all they want is devotion, love, protection they didn’t receive from the parents or guardians that abounded them.

Don't use plagiarized sources. Get your custom essay on
“ The Wild Children ”
Get custom paper
NEW! smart matching with writer

Facts known about the child:

Oxana Malaya lived in Russia, Ukraine in an old village farm at Blagoveshchensk. For six years Oxana lived with the family’s dog in the kennel. Oxana Malaya was born in 1983. She weighed 5 pounds and 11 ounces. She had no disabilities nor psychically, mentally and emotionally problems.

Her parents were drinking alcohol one night and left their three year old daughter outside. Looking for warmth and comfort the child crawled to the dog’s kennel.

When the dogs braked. She would repeat what they did. The dogs were like a mother to the child; sharing food and raising the child as one of its own. Surviving on raw meat and scraps. A neighbour found Oxana at the age of eight in 1991 but it was too late, she already started mimicking the dog’s behaviour and how they lived. Oxana Malaya could bark and run on all fours because her muscles and body grew into that kind of position. Oxana learned how to understand what the dogs were communicating to her.

She started copying the dogs; that’s how she learnt to survive the everyday life of a dog.

The dogs used to attack anyone who dared to take Oxana Malaya away from them because they had a special connection/bond that couldn’t be broken. The way they got Oxana away from the dogs was to distract the dogs by food. How the child was affected by the upbringing:

Oxana didn’t feel the need to talk because she only socialised with dogs. Without her parents guiding her. Teaching her right from wrong. How to act in society plus she didn’t have any children to play with. Oxana was shown by dog how to behave and what is wrong and right in a dog’s world. When people looked at Oxana they could see that she was uncoordinated with tom boy looks. The way she walked is like she was stomping and swinging her shoulders. Also her teeth are misshaped.

There was not much documentation recorded about Oxana Malaya physical and psychological state by the police and the other authorities. They neglected the situation because it was. To shameful to acknowledge Oxana Malaya. The outcome could have sealed her fate if it wasn’t for the neighbour who called them.

The progress Oxana Malaya made:

Oxana was sent to an orphanage. She bonded emotionally to semi-stray dogs. It was believed that the stray dogs and the dogs she grew up with at her family’s farm stunted her abilities in language, human social and emotional skills. Later Oxana Malaya was sent to a nursing home for mentally and disabled adults in Barabol (Ovidiopol Raion of Odessa Oblast) she went through years of specialized therapy and education to correct her behaviour in social and education issues. They taught her to speak fluently and many of her behavioural problems were fixed.

At the age of 20 they put her in a house for the mentally ill (Baraboy Clinic) where the doctors could rehabilitate her but they first wanted to learn the facts and history about the child. So they could get her used to living with a human society and dealing with the human language. Oxana Malaya can now understand the human verbal communication in addition make sentences. The specialists believe that because she had started to pick up language as a toddler she had developed a framework to add new language to. At the age of twenty-two Oxana wanted to see her birth parents for the first time. Oxana was talking about her parents,

‘My parents had too many children and not enough beds. Also my mother wanted a son but she got a daughter instead. The kennel felt like my own little house because I would only just visit my parents. I know I can never forgive my parents for what they did to me’ Oxana was told she had no parents by the doctor but later was told the truth.

Oxana Malaya has a great deal of devotion to the dogs because they saved her life. Some situations trigger her back to when she lived with dogs and how she used to crawl on all fours.

British psychologist and expert on wild children, Lyn Fry, went to see Oxana Malaya with a film crew (channel 4) at the Baraboy Clinic where she was living. ‘It was dirty, terribly rundown and primitive but in the Ukrainian terms, very desirable. Her carers are good people and with the best interest of their charges of heart, though there is no therapy as such. Oxana Malaya is doing things she loves

Lyn Fry studied Oxana with day to day human interaction and how she processed new information in a socialised environment. ‘She doesn’t have the social or personal skills. She has had boyfriends but she doesn’t have the ability to form a long-term relationship or to understand give and take. She would rather fall out then compromise. She is a very vulnerable person and there is no protection outside that institution’ Lyn Fry reported.

‘She made a very striking impression on me. When I made her a gift of some wooden toy animals we had used in test she would thank me superficially, you never knew she was a young women raised by dog’s.’ quoted by Lyn Fry.

Dr Lyn Fry did tests verbal and non-verbal skills after the test were done they showed that Oxana Malaya had the ability of a five year old girl.

‘I did many tests on Oxana Malaya and discovered that she had a mental capacity of a six year old and dangerously low boredom threshold. Oxana Malaya could count numbers but could not do addition. She cannot read or spell her own name correctly’ Lyn Fry said a few weeks after her conducted the tests.

At age 23 Oxana feel in love and started dating a guy the relationship didn’t last because she told him how she lived with dogs when she was younger and how she can bark. The boyfriend was frightened and that’s why they broke up. Oxana Malaya wanted to have an honest relationship and hide nothing from her boyfriend. She was not ashamed of her past life.

Oxana Malaya made some progress, even though she will never be the same again. She currently lives at the Baraboy Clinic in Odessa where she works with farm animals and look after dogs there.

Experts agree that unless a child learns to speak by the age of five, the brain misses its window of opportunity to acquire language, the defining characteristic of being human.

Oxana Malaya was lucky enough to pick up some English language when she was younger unlike some other children that grew up in the wild and had no communication with any human being since they were younger.

The children who have been isolation or have grown up with animals away from human contact, care, love and social behaviour, will not know the human language unless they have heard a few words or sentences when they were younger if they do not hear a bit of the human language they will not gain the proper skill.

Sometimes a carer or normally parents confine their children at a young age, denied from any social interaction with other family members, children and the public. Some of these feral children have been forgotten about but there is always another reason why the children run to the wild to live, they feel the need to be safe and loved rather than dealing with child abuse or some kind of trauma. Some of these children will never fully be “normal again”. The children have to deal with the media’s interest with them and also the scientific interest. 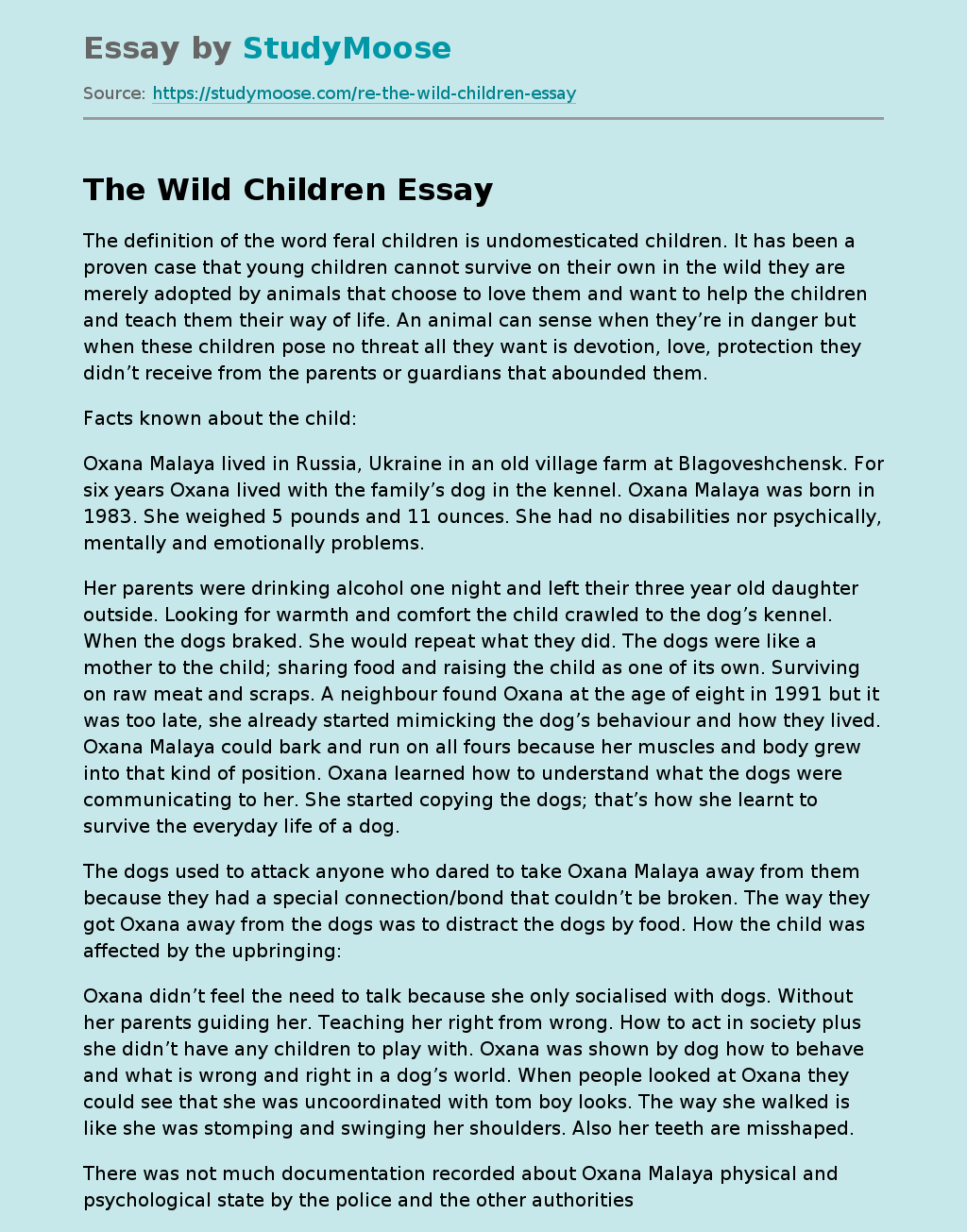