Analysis: The short story, “Two Kinds,”� displays the relationship between a Chinese mother and a disobedient Americanized daughter. Jing-mei, a second-generation Chinese daughter, deals with her own internal conflict as well as an external conflict with her mother. The internal effort to find her true self is a lesson Jing-mei will have to discover, as she gets older. Being born of Chinese heritage, Jing-mei struggles with the burden of failing to meet her mother’s expectations.

She was never sure what she wanted to become.

Don't use plagiarized sources. Get your custom essay on
“ The short story “Two Kinds” ”
Get custom paper
NEW! smart matching with writer

Throughout the story, Amy Tan represents the theme that parents cannot control their children, but can only guide them. Amy Tan’s “Two Kinds” first two paragraphs provides information about the mother’s beliefs. There are at least two things: (1) the voice of a narrator who does not quite share her mother’s opinion, and (2) a comic tone. When someone says, “My mother believed,” there is sure to be some difference between the speaker and the reported belief.

The belief is further distanced by the fivefold repetition of “You could.” The comedy—perhaps better characterized as mild humor—is evident in the naivete or simplicity of ambitions: open a business, work for a company, retire, buy a house, become famous. Many people may feel superior (as the daughter herself does) to this mother, who apparently thinks that in America money and fame and even genius are readily available to all who apply themselves—but many people may also wish that their mother was as enthusiastic.

The second paragraph adds a sort of comic topper.

After all, when the mother says, in the first paragraph, “you could be anything you wanted to be in America,” the ambitions that she specifies are not impossible, but when in the second paragraph she says, “you can be prodigy too,” and “you can be best anything,” we realize that we are listening to an obsessed parent, a woman ferociously possessive of her daughter.

Obsessions, of course, can be the stuff of tragedy—Macbeth, Brutus, and so forth—but obsessions are also the stuff of comedy. The third paragraph, with its references to the terrible losses in China, darkens the tone, but the fourth restores the comedy, with its vision of “a Chinese Shirley Temple.” The fifth paragraph is perhaps the most obviously funny so far. When Shirley Temple cries, the narrator’s mother says to her daughter: “You already know how. Don’t need talent for crying!”

People—accustomed to thinking that everything in a textbook is deadly serious—easily miss the humor. They will definitely grasp the absurdity of the thought that “Nairobi” might be one way of pronouncing Helsinki, but they may miss the delightful comedy of Auntie Lindo pretending that Waverly’s abundant chess trophies are a nuisance (“all day I have no time to do nothing but dust off her winnings”), and even a deaf piano teacher may not strike them as comic.

The story is comic (for example, in the mother’s single-mindedness, and in the daughter’s absurd hope that the recital may be going all right, even though she is hitting all the wrong notes) but is also serious (the conflict between the mother and the daughter, the mother’s passionate love, the daughter’s rebelliousness, and the daughter’s later recognition that her mother loved her deeply). It is serious, too, in the way it shows us (especially in the passage about the “old Chinese silk dresses”) the narrator’s deepening perception of her Chinese heritage.

Humor and seriousness can be found in all types of family situations between parents and children.

The short story "Two Kinds". (2016, May 01). Retrieved from https://studymoose.com/re-the-short-story-two-kinds-essay?post 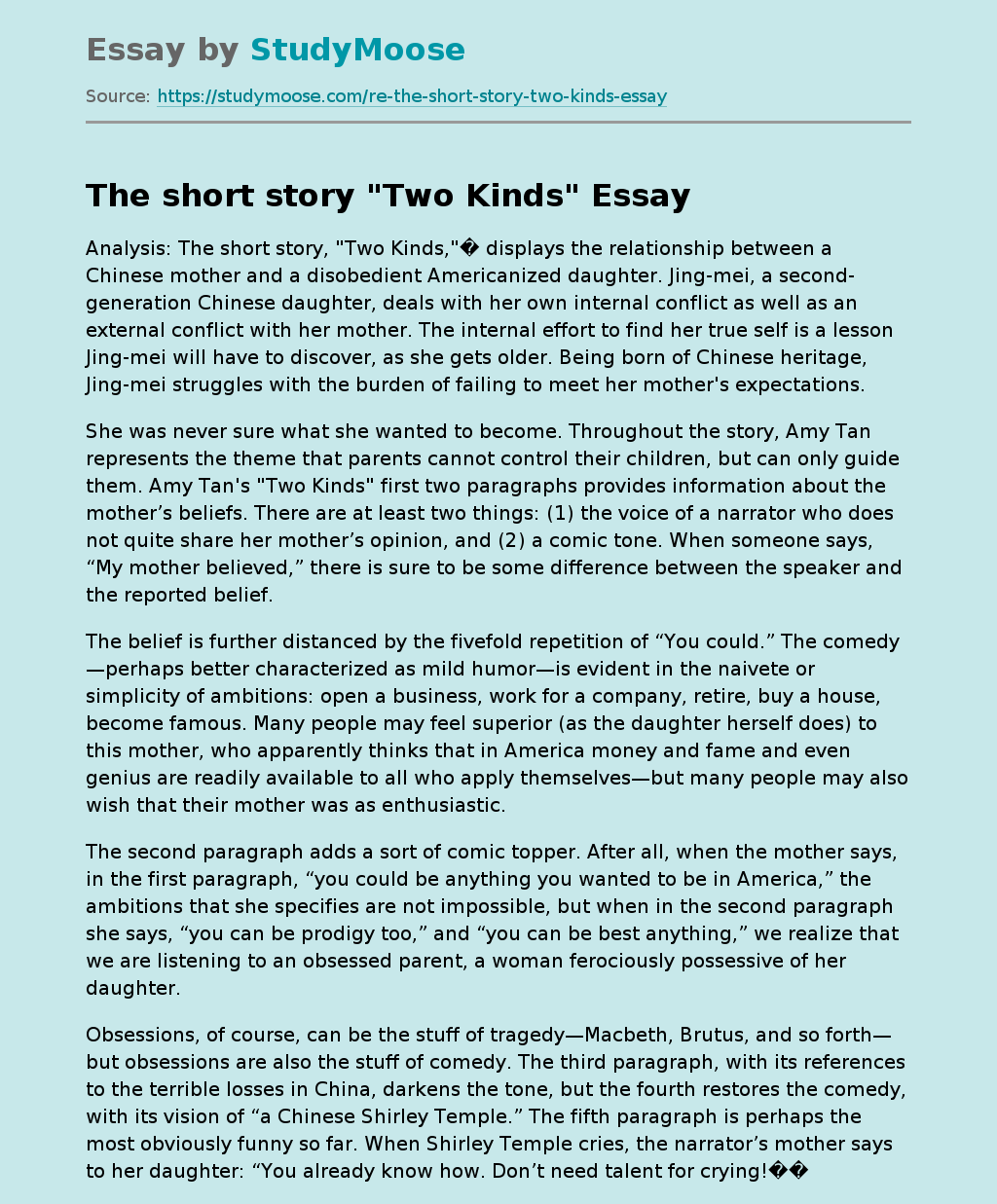