“The Glass Menagerie” is a play written by Tennessee Williams. The play is semi-autobiographical, told from the point of view of the writer. It is a memory play set in the home the Wingfield family. The play is about a young man, Tom, who lives with his mother, Amanda and his sister, Laura.

Don't use plagiarized sources. Get your custom essay on
“ The Glass Menagerie ”
Get custom paper
NEW! smart matching with writer

The play explores the various struggles of each individual during the great depression. The characters all have their flaws and motives which help us to understand them and sympathise or agree with them. All the characters in the play behave in some sort of obsessive manner; however, Amanda behaves most strongly this way.

Amanda Wingfield is one of the main characters and plays a great role in the readers understanding of the play as a whole. She behaves in a very obsessive manner throughout the play and this creates conflict between the other characters. In Scene one, we are introduced to Amanda’s obsessive and controlling behaviour. As Tom eats at the dinner table, Amanda continuously pesters him, telling him how to eat his food. “Don’t push with your fingers. If you have to push something, the thing to push with is the crust of bread…So chew your food and give your salivary glands a chance to function!” Amanda treats Tom like a child which frustrates him.

He is very short tempered and easily irritated by Amanda’s over controlling and obsessive personality. She also obsesses over Toms bad habits, proclaiming that; “you smoke too much.” Amanda is constantly complaining about Tom and criticising him, this is due to her infatuation and constant desire for perfection in all aspects of her life. She is like this as she cares for them but does not realise that she is smothering her children.

In Scene three, Amanda has a heated argument with Tom. This is instigated by Amanda’s act of throwing out Toms books. She exclaims that she “took that horrible novel back to the library.” This angers Tom and he vents all his frustration on her controlling nature and the sense of entrapment as a consequence of this. Amanda is also very controlling over Toms actions as she gets suspicious of what he gets up to at night. This emphasises the lack of freedom that Tom feels due to her behaviour and it creates tension and arguments between them. Tom feels the need to escape but Amanda is obsessed with the fact duty and responsibility comes first. Amanda is worried about her children and feels that it is her responsibility to monitor their actions at all times, however she fails to realise the effect this has on them.

Amanda also obsesses over Laura in Scene three; “Laura began to play a more and more important part in Mother’s calculations. It became an obsession… the image of the gentleman caller haunted our small apartment.” She is preoccupied with finding Laura a gentleman caller as she feels that this would be best for the family. Laura, being disabled, puts financial strain upon the family. If Amanda was able to procure a gentleman caller for her, this would ensure a better quality of living for her and the family. Amanda constantly tells Laura to expect many gentlemen callers and decides to ignore her disability. She tells Laura to “stay fresh and pretty for gentleman callers.” Amanda’s insensitivity in this matter crushes Laura’s confidence.

In Scene six, on hearing the news of the arrival of the potential gentleman, Amanda “has worked like a Turk in preparation.” This implies her obsession with appearance and impressing Jim. She deceives people into making them think that they are a wealthy family – despite the fact they are not rich. She attempts to make a lasting impression on Jim in the hope that he may be their saviour from poverty. Amanda is doing this for the benefit of both herself and her family.

Whilst trying to secure a suitor for Laura, Amanda often reminisces about her own past. She is still living in the past and speaks of it often – so often that Tom and Laura can already foresee what is coming next.

“Tom: I know what’s coming.
Laura: Yes. But let her tell it… She loves to tell it.” She often talks of her “seventeen gentlemen callers.” Amanda is self obsessed and narcissistic, implying that she judges a woman’s worth by the amount of attention she receives – further causing Laura to feel insecure about herself. Amanda is vain and egotistical and obsesses over her appearance. In Scene two she is described as wearing “cheap or imitation velvety-looking cloth coats with imitation fur collar.” She cares very much for her appearance and she takes pride in it.

Her clothes show that she is still living in her own past yet now is only a faded southern bell. Amanda is used to attention and in Scene seven, she makes sure to dress attractively, despite the fact that it is supposed to be Laura’s night. Amanda “wears a girlish frock of yellowed voile with a blue silk sash… the legend of her youth is nearly revived.” The occasion of Jim the potential gentleman caller, reminds her of her own past, in which she had countless gentleman callers.

Not only does Amanda obsess over her own appearance but also the appearance of her children. Before Jim arrives, in Scene six; “Amanda produces two powder puffs which she wraps in handkerchiefs and stuffs in Laura’s bosom.” This highlights the recurring theme of appearance versus reality, which is evident in many of Amanda’s actions. She is so engrossed in her actions, she I willing to deceive people in order to get what she feels she needs. She obsesses over many things in Scene seven, for example, she insists that Laura open the door to Jim and Tom and is insensitive to Laura’s anxieties and insecurities. However Amanda is only doing this due to the fact that Jim acts as a beacon of hope for them all and she is eager for the evening to be a success.

In conclusion, Amanda is deeply flawed throughout in regards to her obsessive and over controlling manner. Due to her behaviour, she eventually drives Tom away. However, she only means well in her actions. She is critical of her children because she feels she knows what is best for them. Her obsessive nature influences the readers understanding of her character in the play as a whole. It helps the reader understand Amanda’s and her children’s struggles, hopes and fears. 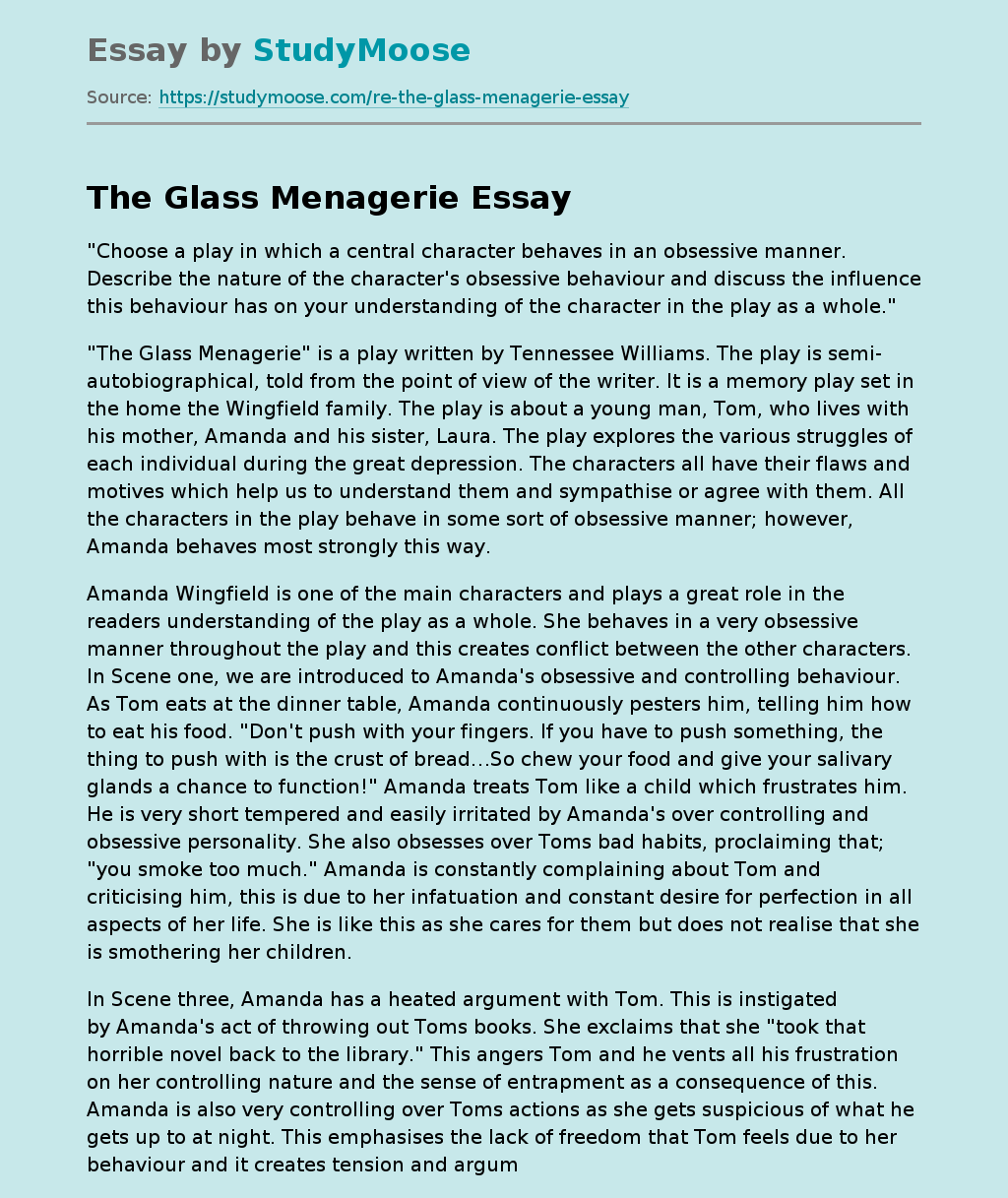