"The Broken Tower" by Hart Crane

A Broken Tower, by Hart Crane, is a metaphor-rich poem that is very ambiguous but seems to describe the difficulties of the creative process and the way in which the artist is bound and compelled by it. Crane uses many religious metaphors and references, directly mentioning God and also bells, which are associated with churches. It is possible to interpret the poem in a religious sense, but it could be argued that religion and art are similar metaphors; that, for the poet, his writings are both a method of spiritual expression and a search for truth.

Don't use plagiarized sources. Get your custom essay on
“ “The Broken Tower” by Hart Crane ”
Get custom paper
NEW! smart matching with writer

The title, A Broken Tower, refers to a continuing metaphor in the poem and suggests the deconstruction of established paradigms which is necessary for artistic progress. Throughout the poem, Crane speaks of destroying a stone tower and building a new one from within himself; and as the poem progresses, the tone shifts from negative to positive. The poem is simple stylistically and consists of ten quatrains with an abab rhyming pattern.

Crane begins the poem with one of the predominant metaphors, the bell. This also has religious significance, as it is associated with the call to prayer in the morning. However, Cranes bell does not call people to God but rather gathers God. Also strange is the fact that the tone of the first stanza, though regarding dawn and God (traditionally positive), is quite negative. The poet is dropped down the knell of a spent day and his feet chill on steps from hell. This curious negativity shows Cranes rejection of the traditional, symbolised by established religion.

Normally, to go from pit to crucifix would be positive as it symbolises moving towards God, but the poets disdain for the traditional manifests itself in the decidedly negative tone of the first stanza.

He then speaks of the belltower, which is a mighty stone structure. In it is a corps of shadows whose shoulders sway, representing the bells. The bells, described as shadows, are contrasted with the implied concreteness of the tower. Also, their antiphonal ringing creates chaos within the poet. Traditional concepts of positive and negative are reversed, with the Sun presented as an overpowering force that captures the stars, rather than a bringer of light and hope. In the second stanza Crane describes both the visual and auditory aspect of the bells. Sound is manifested in voices, singing or the pealing of bells; and Crane asks: Have you not heard, have you not seen the bells.

Interestingly, the bells then break down their tower. Although this is the first mention of the tower in the body of the poem, it is already associated with traditional religion and because of the bells. This breaking of the tower symbolises the destruction of accepted norms and paradigms, a deconstruction in fact, but the poet is not in control of this– the bells swing [he] know[s] not where and he is their sexton slave. However, it is he who has written their music, his long-scattered score of broken intervals.

This implies that although he is the instigator of the breaking of the tower, this is a process which is not completely known or controlled by him; and that he is somehow compelled. This is probably a reference to the artistic process of writing poetry, where he must abandon the ideas of the past in order to create that which is new– a process that is somewhat mysterious to him, but nonetheless compelling and necessary. It is also deeply powerful: the bells tongues engrave membrane through marrow, or right through to the bone, affecting everything.

The religious imagery is then resumed, with mention of encyclicals, a choir, pagodas and campaniles. This coincides with negative imagery and, interestingly, an inversion of the tower in the form of canyons. The use of the word oval with encyclicals implies a distortion or imperfection, as an oval is an imperfect circle. Another imperfection is implied in the way that the encyclicals are not being sent around as they should be, but in canyons heaping. The sense of obstruction is continued with the image the impasse high with choir. Banked voices slain, suggesting that the religious or cultural system is failing and in need of replacement. This is congruent with the need to destroy the tower, or destroy traditional ideas. Supporting the strong visual imagery is the frequent mention of sound: the choir, voices, reveilles and echoes.

Imperfection is once again alluded to with the entry of the poet into the broken world in order to trace the visionary company of love, its voice. This seems to directly refer to his creative process in seeking truth and beauty in his writing. It is also the most positive concept expressed in the poem thus far– a wholly positive one, rather than the difficult process of destroying the obsolete mentioned before. However, unlike the mighty tower, this voice is an instant in the wind and not for long– in other words, transitory. It is also mysterious and beyond the poets control, like the bells in the tower, as the poet admits he know[s] not whither [it is] hurled.

Crane makes a more specific reference to his art; his word, as opposed to the Word of that tribunal monarch of the air. The latter belongs to God, who is depicted as powerful and judgemental: the deity of the Broken Tower. This could be seen as a personification of the judgemental ostracism that Crane faced as a homosexual. The God metaphor is expanded on, with mention of Christs wounds pledged once to hope, but also a rejection of it: cleft to despair. In this stanza, Crane offers his word– a replacement of the old Tower, symbolizing a tribunal monarch or an outdated societal or artistic system.

The compelling nature of the artistic gift (or curse) is again alluded to, described as steep encroachments of blood. This seems to confirm the way in which artistic expression is involuntary and that people like Crane are slaves to it. The mention of blood begins a new metaphor– one of his own body, especially his heart and lifeblood, which supersedes the impersonal and rigid Tower. He asks the question: could blood hold such a lofty tower as flings the question true?, which raises the contrast between the blood, symbolising personal, passionate and transitory creativity and the tower; and also by use of the word flings, along with previously used words such as long-scattered and hurled, seems to create a feeling of violent, rapid movement, perhaps a representation of the unpredictable and controlling nature of his art.

Crane also presents the opposite of his tribunal monarch– she whose sweet mortality stirs latent power: a positive, feminine mortal, which contrasts with Cranes oppressive, masculine God figure. This gender aspect could also be seen as an expression of Cranes sexuality and his confusion regarding his orientationThe heart metaphor is then elaborated upon, as Crane speaks of the pulse [he] hear[s], the strokes, his veins and the angelus of wars [his] chest evokes. The latter seems to refer to the mantric and passionate nature of the hearts voice, which he follows rather than tradition. He also breaks away from negative, distorted and imperfect concepts, speaking of that which is revived and sure or healed, original now, and pure– a subversion of the wounds pledged once to hope. By the rejection of that which is obsolete and oppressive; and the symbolic destruction of the Tower, Crane accomplishes what he could not while oppressed.

He builds, within, a tower that is not stone, a creative and necessary alternative to the Tower he destroyed. This suggests he must create his own personal paradigmatic system in order to be allowed to express his word. He speaks of heaven as positive and immaterial, rather than the concrete and negative tower. As his artistic needs can be likened to religion and their expression to God, this heaven is the perfection on a higher level that he aims for and creates a new tower in order to achieve. The transitory, mortal nature of this new tower, or system, is described as slip of pebbles– the beginning of his final metaphor: nature. Rather than the pealing bells of the old Tower, Cranes pebbles are visible wings of silence that are sown in azure circles, widening as they dip. This is a peaceful image of ripples on water as Crane builds his new tower in order to jacket heaven.

He finishes by urging the matrix of the heart to lift down the eyes, in direct opposition to the traditional lifting up of the eyes to God; and describing further natural imagery: the quiet lake and the commodious, tall decorum of that sky, which is beauty that contrasts with the pit and hell from the beginning of the poem. The imagery suggests that Crane has moved closer to his aim of building a new tower for himself and escaping the constraints of the old system in order to be able to release the artistic expression that is thrust upon him, the medium.

A Broken Tower is a very ambiguous and at times conflicting poem. Metaphor is important to Crane and he sometimes abandons sense and meaning for its sake. Throughout the poem, as his tone moves from negative to positive, Crane moves from the stone belltower and the God it gathers to the tower withinthat is not stone and nature. Although it could be argued that this poem is a treatise against an oppressive God, it seems that a more appropriate interpretation, given the difficulty and forcefulness of artistic expression, would be that Crane speaks of the need to destroy what is old and constraining in order to, phoenix-like, be reborn, healed, originaland pure and create that which is new and innovative.

The difficulty and pain that he speaks of alludes to the painful and uncontrollable force that artistic people, such as poets, experience, which compels them to express themselves. It seems that A Broken Tower by Hart Crane is a description of the difficulties experienced by an artist, such as the poet, (especially as a marginalised homosexual) in the creation of the new and the rejection of the old.

"The Broken Tower" by Hart Crane. (2016, Jul 27). Retrieved from https://studymoose.com/re-the-broken-tower-by-hart-crane-essay 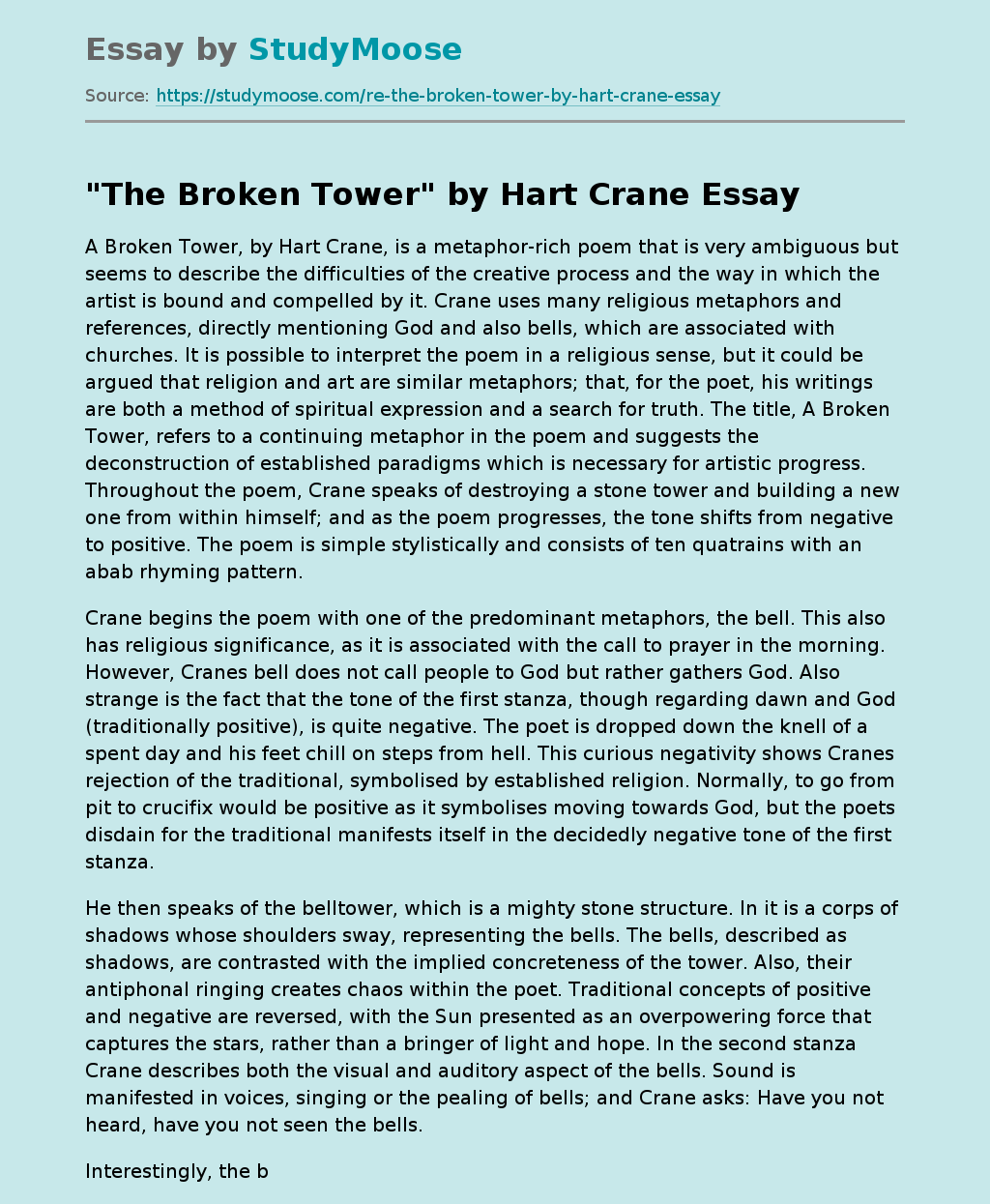