Arthur Schopenhauer once said “every men take the limit of his own field of vision for the limits of world “a vision is the best path way to understand culture. And today I will be talking about Australian vision through Douglas Stewart’s “eyes” .Australian vision are a reflection is Australian beliefs, value, and perceptions. In Mr. Stewart’s poems explore concepts of Australian’s egalitarianism, Australia flora and fauna, Aussie battler. The poems clearly present those ideas. Wombat’s Aussie battler struggle for survival, the beauty of Australian flora “snow gum” that is standout out in snow.

Don't use plagiarized sources. Get your custom essay on
“ Speech Australian Visions ”
Get custom paper
NEW! smart matching with writer

In the poem “then snow gum” Douglas Stewart present the ideas of snow gum’s inner strength as it overcomes the difficulties as an Aussie battler and the beauty of Australia’s flora. The use of imagery “out of granite’s eternity”, “out of winter’s long enmity” the bitter, cruel climate and harsh environment create the idea of winter as an enemy, and the solid, dark, hard element of granite.

All those present an idea of Aussie battler as the snow gum has struggled to survive in this harsh environment. Also suggest an idea that Australians can struggle to survival through difficulties and push themselves to try harder and never give up. And the use of simile connect snow gum to “ecstasy” by using hyperbolic emotive language drop a hint to audience a spiritual connection and shows that the poet were amazed by the view of the tree in the snow and he was enjoyed.

And the color of “silver” and “green” is symbolize the warm life in the cold winter and is a miracle to survived in this harsh environment.

The poem “snow gum” is a vision of Australians overcomes the troubles and face the difficulties at the same time he shows the amazing picture of Australian’s flora The poem “wombat” shows us another side of Australian visions such as: Australia fauna and egalitarianism. The use of metaphor demonstrates the idea of egalitarianism “we have one mother, good brother” the metaphor emphasizes the relationship between mother earth and the wombat and we clearly see the earth has a deep connection with the wombat 1st the earth provide shelter 2nd the earth give the wombat food to survival. And it also shows the kinship between the poet and the wombat suggesting an idea that we are come from the same Mother Nature, and we are a family. 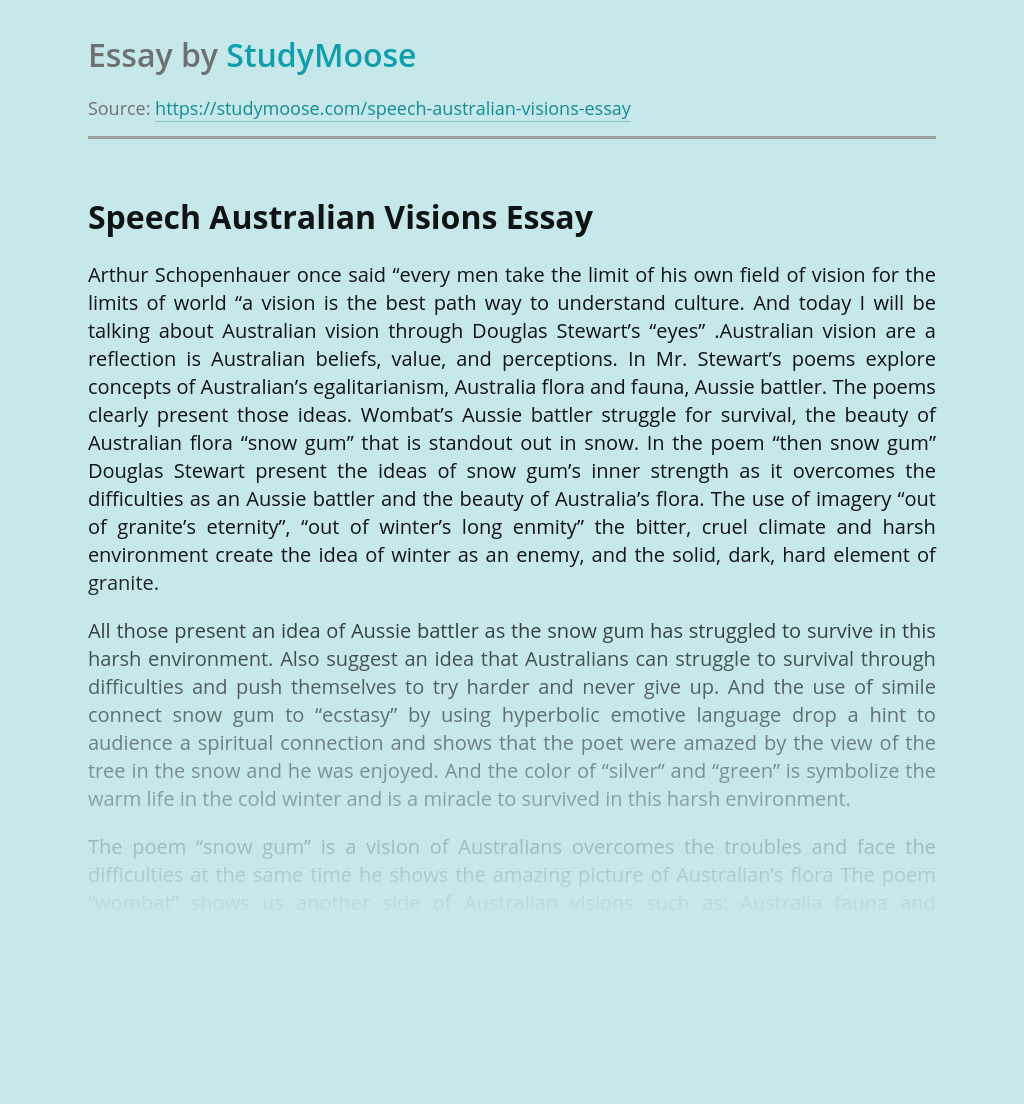