Since Somalia’s government collapsed, there has been terror not only on the streets but also on the seas, and the fishermen that once fished along around Somalia’s coasts have lost their jobs. As Jeffery Gettleman writes in a article about Somalia’s coast; Nuclear power companies started to pay to have their nuclear waste taken to Somalia and dumped because it an easy way to get rid of nuclear waste.

The waste hurt the fish population and the fishermen lost their jobs (Gettleman).

Don't use plagiarized sources. Get your custom essay on
“ Somali Pirates ”
Get custom paper
NEW! smart matching with writer

Anouk Zijlma writes that without a steady source of income from fishing, the fishermen working out of Puntland Somalia have set up their own system of defending their coast and making money in the process (Zijlma). Countries have labeled the fishermen as pirates, but they do not think of themselves as such, but as defenders of their coastline.

The so called Somali pirates have become increasingly harder to stop because of the pirate’s ability to cooperate in tactical teams of eight or nine while keeping in contact with their intelligence personnel in Puntland Somalia, get past international sea law, and set up operations beyond Somalia’s coastline and on to Kenya.

As of now the only hope of stopping Somali pirates is to set up a stable government in their country, but that could take several years.

Several people have addressed going into Puntland, Somalia and eliminating the pirates, but it’s not that easy when the pirates work off of ransoms and will kill any kidnapped person or blow up any stolen vessel if they feel threatened.

The pirates operate in organized teams of eight or nine, this helps them divide up and take on shipping vessels in two or three different teams. As Anouk Zijlma writes; the pirates work off of so called “mother” boats. These mother boats supply intelligence to the small tactical teams as to where potential ships are located on the ocean (Zijlma).

The fact that the pirates have small and fast speed boats makes it very easy for them to maneuver around larger shipping vessels. The pirate’s fire upon the ship with rocket propelled grenades before getting aboard the boat. Once aboard the pirates use a breach and secure tactic in order to gain control of the ship and its passengers. The pirates have maritime skills that enable them to use and control a large variety of vessels. Pirates more often than not take hostages from the ships they hijack.

One of which the pirates are given 13 miles off of Somalia’s coast to do anything Somalia’s government will allow, which happens to be anything the pirates please, due to a lack of a functioning government. The international oceanic law also allows the pirates the entire ocean to raid, and still be able to come back to Somalia without anyone prosecuting them, while they only run the small risk of another country’s naval force assaulting them. Oceanic law does not allow countries with governments to let boats go out at sea with weapons at the ready without consent from the U. N. his makes it very easy for pirates to come aboard ships and easily hijack a defenseless vessel (Clark).

Owners of shipping vessels have the option to hire armed services to defend their ships against pirates while going around or near Somalia, Usually pirates are deterred by this. The U. N. could set up a naval forces defending Somalia’s coast, but that could take billions of dollars, and will not actually put an end to piracy but just slow it down. Somali pirates are prone to attack ships around the tip of north eastern tip of Somalia, since then they have expanded their operations towards Kenya.

An article by the economist magazine describing a kidnapping in Mombasa, Kenya, reports; “On October 1st a disabled French woman was dragged from her home on Kenya’s northern coast by pirates and taken by speedboat to Somalia. That attack took place at an isolated spot closer to the Somali border. But the French woman was snatched near the town of Lamu, a haven for foreign tourists. The French captive was apparently taken ashore at Ras Kamboni and driven to the southern Somali port of Kismayo, a Shabab stronghold. If ransoms are paid, as they have been before, more kidnappings are likely.

Payments for the release of ships nabbed off Somalia’s coast have risen from $100,000 to $2m-plus. Many Kenyans accept that robust action is required. Yet cross-border military intervention is unlikely and would probably be counterproductive. In the meantime, the growing operational range of the pirates and their ties to jihadists mean that tourists may be at risk of capture ever farther down the coast. ”- (Fetching) One of the reasons pirates are expanding their operations is because of an indirect link to famine in Somalia. ithout working government, jobs are lost and food is increasingly scarce.

In order to live Somali’s have to resort to piracy, they have nothing to lose, and everything to gain. Overall Somalia remains without a working government, and without government Somali pirates thrive. Somalia’s neighboring country Kenya has seen a immense decline in its country’s economical standpoint since its revenue is mostly derived from tourism, because northeastern coastal African countries have been rightfully thought to be very dangerous and notorious for pirate attacks.

According to the economist magazine on October 28th Kenya sent troops into Somalia for an invasion. Kenya’s armed forces have seen little action at home and even less abroad. That changed this week when several thousand Kenyan troops invaded neighbouring Somalia. Kenya is frank about its military aim. It says it wants to push on from its positions in the Somali towns of Afmadow and Ras Kamboni to attack Kismayo from the west and south. The kidnapping and killing of foreign tourists has temporarily wrecked Kenyan tourism.

For some months Kenyan citizens and soldiers have been shot at and kidnapped along the border. A buffer zone is clearly needed. Oxfam and other international charities say that 750,000 Somalis are at immediate risk of dying from hunger. Such numbers are open to dispute. The pirate’s increasing abilities to work in tactical teams, to bypass oceanic law, and expand their operations have all led to a surge of chaotic momentum that is becoming increasingly harder to stop. the only sure fire way to stop the pirates would be to invade Somalia and set up a stable government. For Kenya the long invasion has just begun. 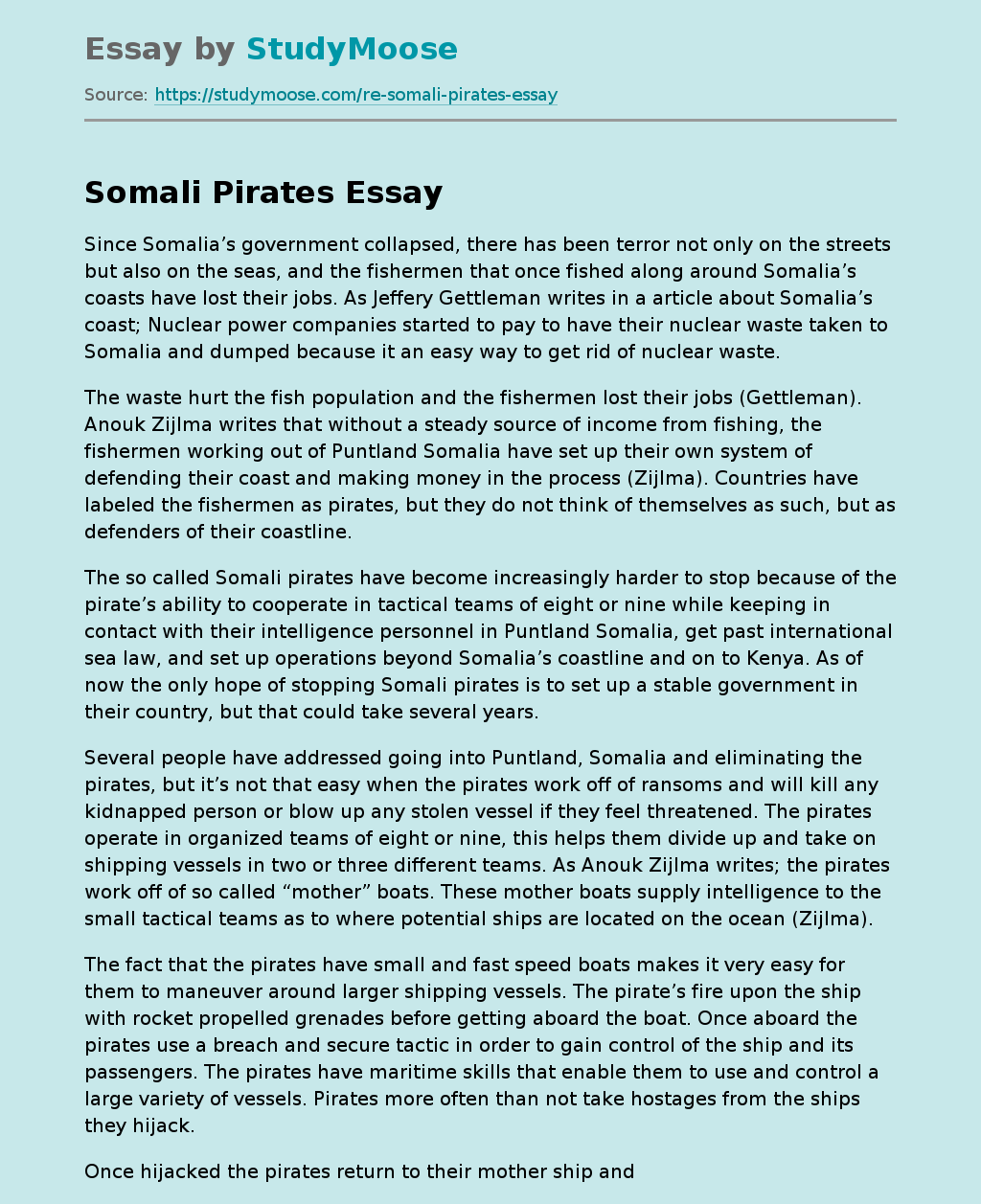