The article “ On Face-Work,” by Erving Goffman, focused on meanings of face, the image of self that individual presents, in a world of social encounters. Once an individual give out his positive self-image to others, should or should not present that oneself-image depend on how he feel about the encounter between him and other participants. When someone is inconsistent with how he projects himself in the society, he may be feel embarrassment or discredited; therefore, the individual protect himself of unfavorable way to others.

Don't use plagiarized sources. Get your custom essay on
“ On Face Work ”
Get custom paper
NEW! smart matching with writer

Face is image of self portray have been expressed to others see and consider. Emotions and feelings become attached to the particular face; so he may have feel good, feel bad or being hurt depends on how his face expresses and how the encounter products. He “feels good” if the situation proceeds on the way, which he expected to be, whereas if his expectations are not fulfill, his feeling turns bad. Beside, “rule of the group and the definition of the situation” determine importance in how face and image of self are viewed because it is not only response to others, but one’s own emotion lead encounter.

Proficient in: Being Polite

What someone say, or how they say it can change how a face is seen from another eyes. So, a person may implicate his own immediate and spontaneous face, which creates image and feeling itself without conscious considerations, to other participants. Internally consistent face, involves judgments and evidence from other, is one whereby the person is in maintain face.

It is not only actions of one person, but also the view of participants “in the flow of events in the encounter”; that is maintained. Someone said to be wrong face when information that comes from external source is inconsistent to his face.

Alternately, the person may be out of face when he has no line to show up in certain situation, even though they are in contact with others. When people are in wrong face or out of face, some may feel shame, interiority, or they may have bad feeling; some may keep presenting an impression of confident. Those who know how to control embarrassments called poise. There are several methods for prevent to threats to the face. Avoidance, one of the basic kinds of face-work, process by changing the topic of conversation and acting as the threatening expression has no occurred at all.

Once someone change an encounter into inconsistence, another kind of defensive measure, he action or resources to keep of or away from activities. Protection maneuvers- “a person shows respect, politeness, making sure to extend to other any ceremonial treatment”. When someone loses control of his expression during encounter, he can turn away or time out for moment. For example, two people are in conversation and one turn to mad, to control the temper of encounter, another decide to leave him or his active for a moment to give him time to calm down; so they can avoid fighting.

Ritual disequilibrium or disgrace, one or more participants find themselves in an established. Ritual means the system of ceremonies, respect, or acting with symbolic component. Interchange is the sequences of acts set in motion that re-establishment of ritual equilibrium. For example: Marry collide to David in the small hallway, A says, “ Excuse me” and then B replies “ Sure”. Those speeches are corrective ritual. There are four classic moves. First, the challenge, participants take on responsibility to the misconduct. The second move is offering, the offender is given chance to correct to correct or restore equilibrium.

The acceptance will been occur after the first and second move had been made. The person to whom can satisfy or re-establish the order of offense. Finally, thanks, the fourth move, provide model for ritual behavior, but deviation from model may include refusing to change. Those parts may fit better when interact together than separate into conscious ones. Lack of effort by one may be met with inducible compensative effort from others. Simultaneous apology is the chances for this happen. Many offenders and offended simultaneously attempt to an apology to reduce their criminal.

Resolution of situation- the first requirement is more important than apportioning of blame- typically a secondary consideration. There are many more other protect individual. A participant appreciates a delicate situation and to do or say the most fitting thing for different reasons with saving his own face and the face of other, called tact. Then, “tacit cooperation will naturally arise so that the participants together can meet shared but different objectives. ” One of common tacit cooperation is face saving. Face saving refer to maintaining a good self-image, defense his own face and protect the other.

People who make a mistake or involve in conflict know they are wrong often not admit that they are wrong to avoid embarrassing remonstrance. Another form of tacit cooperation is reciprocal self-denial. A person just accepts apportionment of judgment during the occasion without having clear idea about it. Negative bargaining means participates try to make a trade to other side. For example, they try to pay a lunch for other like: “ Let me pay for this one” or “ No, I could not. It is my turn. ” Therefore, tacit agreement is someone willing to abide, to help others perform theirs.

Without ritual, socialization could not organize or worth as it is. Self, the image was expressed from the social interaction that creates face of person. Or the self can understand as play the game or set of ritual. When the person make the mistake that against himself, the person have the prerogative to for give the event is not he, it must be the other participants, who are “exercise it only in his interests or in the interests of the undertaking. ” Much of activity in the encounter occur base on the understanding and effort of all participants, not only individual.

And if the relationships are in the process of change that mean the encounter has been satisfied. The author’s point in this article is to allow the reader to understand the concept of face such as commitment, maintenance of face, poise, and how to deal with social process in social relationship, interaction, and encounter. The meaning of word face is the positive social value of person claim. He considers emotion, feelings, embarrassment, confidence, and give examples; make these as a part of his analysis of social face.

Goffman also focus on the produces and processes of many kind of face-work like ritual, corrective process, avoidance process, and control embarrassment. He is also conscious and attributes meaning to symbol and action of other. What someone says or how someone acts can always change how face in the other eyes. Therefore, how the encounter goes is depend on everyone’s part to understanding, effort to get through the occasion. The Sociological perspective that I am applying to this article is the Symbolic Interactionist Paradigm.

Because this perspective is micro sociology- how face-to-face interaction create the social world, and how face presenting interacts between participants in encounter. Face, image of self is like language sign that others would understand your felling as you express. Any emotions in your face tell others help you avoid bad situation. Being polite attitude is a sign of peace; in contrast, being cocky or angry face would start a fight and probably put you danger. Two people are in conversation and one turn to mad, to control the temper of encounter, another decide to leave him or his active for a moment to give him time to calm down; so they an avoid fighting.

As if you blurt out of words during conversation, your action and how you express your face after that would affect your friends to whether forgive or not. The emotion present in your face would reflect the way people judge you. After reading the article “On Face Work,” I learned many ways to prevent an incident in which lead your relationship downhill. I believe people can understand each other through by looking at others’ emotion and guess their thinking without any word. I think there are some people express their motion and cause many trouble for them. 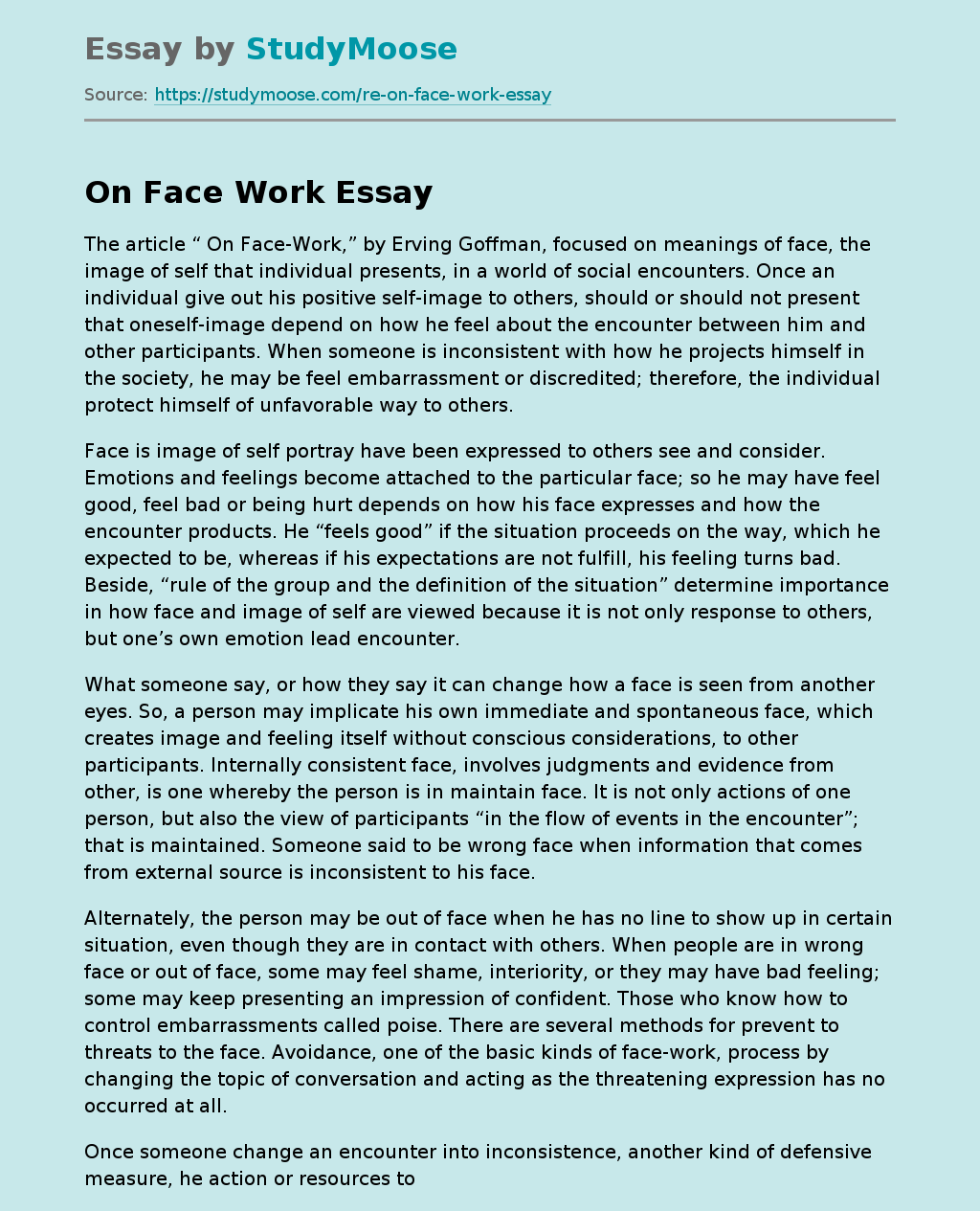