In March 2006, four friends and alumni of the Indian Institute of Technology, Madras connected from different parts of the globe and started talking. Ajit Narayanan worked as a storage engineer with American Megatrends Inc. In California, Aswin Chandrasekaran was an analyst managing product strategy for Capital One Financial Services Inc. in Washington DC. Adib Ibrahim was doing technology consulting at KPMG in Dubai. And Preetham Shivanna was a software engineer with Infosys Technologies, in Mysore, India.

They started talking about their desire “to build a product-based company that would solve some real problems of India.

Don't use plagiarized sources. Get your custom essay on
“ Milk Vending Machine ”
Get custom paper
NEW! smart matching with writer

” By mid 2007, the four were all in Chennai, and had set up shop as Invention Labs. They began by providing services in building electronic systems and designing embedded systems for other companies. They have since made their first foray into building a product – ‘Milk Tree,’ a vending machine for milk sachets.

The Producer Cooperatives and Supply Chain

In India, the supply chain for milk from the dairy farm to the customer has five or six links.

First, small dairy farmers, typically owners of one or two cows, deliver milk to the local collection point often located at the village itself. From here it is transported to a Bulk Milk Cooling centre, which is the first point of refrigeration. Next the milk is transported to a processing plant. Processing plants are usually located on the outskirts of towns and cities. A large metro like Chennai has two, catering to the northern and southern neighbourhoods respectively.

It is also here at the processing plant that the milk is treated for homogenisation, plus other value addition, like skimming, pasteurisation and so on.

From the processing plant the milk is transported to warehouses in different localities inside the city from where it is supplied to the milk dealers of the city. The final link in this chain is made of the ‘milk boys’ who pick up the milk from the dealer, fill their trolleys full of milk sachets and deliver them on foot, to the customer’s doorstep.

Dairy farmers in India are part of cooperative societies supported by the government. At the village level, the dairy farmers form part of a Village Cooperative Society. At the district level, they form a District Producer’s Union. Although the Board of this district level body is composed of farmers, they hire professional managers to run it (this is what differentiates it from the village level organisations). Finally, at the state level, they form a Federation, which is managed by Civil Service government officials.

For the district of Ernakulam in the state of Kerala, the numbers are illustrative. There are three District Level Producers Unions and one state-level Federation in the state. The total population impacted by dairy farming in this state is 2400 Village Co-operatives, and about 150,000 families.

What Are the Problems?

There are several problems associated with this procurement and supply model. The only points in the chain where refrigeration are used are at the Bulk Milk Cooling Centres and the processing plant. This lack of a proper cold chain is the single biggest problem and causes spoilage to the tune of 1% to 3% annually to the cooperatives, directly impacting farmer incomes. To put this in context, annual milk production in India in 2007-08 was approximately 100 million tonnes; losses therefore, amounted to about 1 to 3 million tonnes.

The flimsy nature of plastic sachets often results in leakage and further loss of milk by the time it reaches the customer. Under the current supply system, the customer pays an additional Rs. 0.80-1.50 as delivery cost. Also, since the milk boys have limited carrying capacity, the customer places an order at the beginning of the month, for how many sachets should be delivered every morning. He or she does not have the option of purchasing an extra sachet or two, in cases of sudden need.

The cooperatives also lose out to private players who offer better margins to milk dealers at the cities. These dealers then tend to push private brands, thus further eroding profits for the cooperatives.

To solve these problems, the four friends at Invention Labs have built an innovative machine that vends milk sachets. This was after they conducted an extensive study of vending machine designs and their suitability to local conditions.

Existing machines all operated on a coiled spring mechanism, which proved to be unsuitable for the amorphous nature and flimsiness of plastic milk sachets. Invention Labs’ vending machine uses a unique mechanism to dispense one milk sachet at a time, in a clean and predictable manner. The machine has a two-dimensional grid of columns which hold a total of 120 milk sachets (each sachet contains 500 ml). Using their experience in developing embedded systems, they have built a special encoder, which enables the individual control of all the columns, using just two actuators.

As a result of this innovative design, the team has been successful in building a specialised milk vending machine that is at least half the sale price of existing vending machines in the market. Further, as Preetham mentioned, “all components are over-designed at the moment”, since they are in first stages of product launch. With further selection of appropriate material, design work, and mass production, the team is certain that they can bring down the cost further.

Invention Labs has got its first order for seven vending machines from a dairy cooperative based in the state of Kerala. The business model that they plan to implement with soft funding from the Lemelson Recognition & Mentoring Programme (L-RAMP) is to install such machines in apartment complexes and housing colonies. The cooperative will be provided the option of either purchasing these machines or paying rent to Invention Labs. The cooperative will be responsible for loading the machines every day with milk. All purchases by apartment dwellers will be smart card-based and
cashless. Invention Labs will be responsible for installation, servicing, and maintenance.

How do Different Players Benefit?

Customers will have milk available at their doorstep 24 hours a day. They would no longer need to pay extra money for delivery and would be able to purchase as much or as little milk as they need. Since the milk will be stored at 6-8 degrees centigrade, these machines can ensure better hygiene than the previous supply model.

The Cooperatives, by directly placing their product at the customer’s doorstep, can fight competition from private dairies, and especially target the evening market, which is currently being taken over by private players. The maintenance of milk at the optimal temperature means they will suffer reduced losses.

The potential benefit for the small dairy farmer at the village level is increased earnings, due to reduction in milk loss caused by spoilage. Cooperatives share profits with farmers through dividends. Typically, the farmer gets approximately 41% of the profits, through such dividends trickling down from the federation to district, to village level. Obviously, this figure (in terms of real income to the individual) will vary a lot from one farmer to the next depending on the number of cows, yield, input costs etc. Thus, increased profits for the cooperative – remember losses run to the tune of several million tonnes each year – will eventually flow back to the primary producer.

The fact that the demand for a specialised milk vending machine actually came from the Kerala milk cooperative is an indicator of the stark need for such vending technology.

The primary question to be answered is if the economics of the milk vending model will work out and make it viable for the consumer and the cooperative investing in it. Invention Labs is already looking at innovative ideas like selling advertising space on the machines, and having FM radio channels on it, to increase sources of revenue. They might also offer other value added products like yoghurt and flavoured milk.

The business model has an inherent risk in that the company will install the machines on a rental basis, thus facing default risks and unforeseen operational costs. The smart card and recharging systems have to be built and trialled. Apartment dwellers have to adopt the new system of purchasing milk from vending machines, and while they have patented the design, there is always the danger of others copying it.

These and more questions will be answered over the next few months as the machines are installed and start vending milk packets. But, with such bright and committed minds working on the problem, one cannot but feel sanguine that a technological solution to India’s milk supply challenges is close at hand. 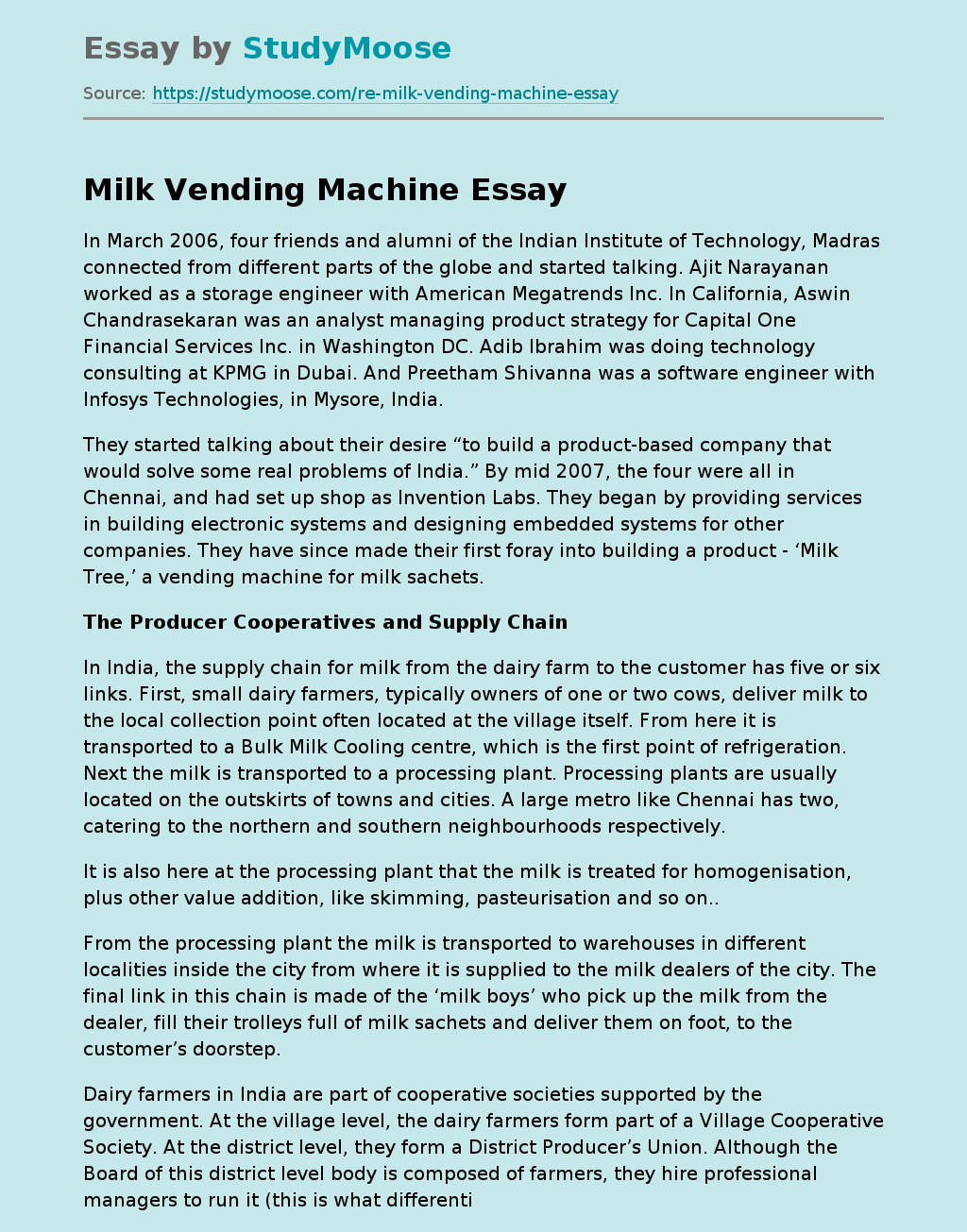