?Even though we as a society live in a more liberal world as compared to life in eighteenth century or even nineteenth century, there are still people who separate themselves from people of different race, age, sex, religion because perhaps they do not handle change well. People all across their world at one point in their life time can have directly or indirectly experienced stereotypes, racism, and or discrimination. Most likely their race or ethnicity was the basis of why the experienced happened.

Don't use plagiarized sources. Get your custom essay on
“ Mexican American ”
Get custom paper
NEW! smart matching with writer

The concept of race and ethnicity has to be established first among people to get a better understanding of the people they interact with on a daily basis. Race is a concept that is dividing people into groups or populations based on their genetic or biological appearance. A factor that people most associate this with is skin color. Then there is the concept of ethnicity that is more complicated for people to completely understand. Ethnicity is a population in which people identify themselves with by shared culture and history.

This will help a person understand why people identify themselves with Mexican, Latino, Cherokee, American, German, and even African American. Personally I have dealt with and experienced stereotypes, racism, and discrimination based on my race. Stereotypes are beliefs and assumptions that are associated with individuals based on their sex, religion, race, or age that may not accurately reflect reality. Some of the stereotypes that I have come across are all Mexicans speak Spanish, all Mexicans are here illegally, illiterate, and have families of ten or more.

Those are just a few stereotypes that some of my white and Asian friends have told me that quite offended me. In fact not all Mexicans speak Spanish and even though I am bilingual don’t mean people should automatically assume that every Mexican they come across will know Spanish because sometimes it is based on whether or not they learned from their parents growing up or in school. Then the part where some have said that all Mexicans are here illegally is far from being completely true. I was born here in good ole Lubbock, Texas.

Yes, my mom is from Durango which is a city in Mexico but after coming here to the United States at age fourteen she became a U. S. citizen to be able to work and support her family in Mexico. There are in fact some people here illegally but that should not be reflected onto those who were born in the U. S. Not all Mexicans are illiterate because what person would not have trouble trying to read or write in another language that is not their primary language. That means that they have to take time and learn to read, write, and speak English, just like any other foreigner coming from another country.

Also to address the stereotype that Mexicans have families of ten or more is not accurate. It is in the culture to have big families because sometimes it has to do with the common religion amongst Mexicans is catholic and therefore birth control is something that is frowned upon and even a sin in that religion. But usually having big families is a choice between the husband and wife; it’s not just something that is instilled within every Mexican to want big families. Moreover, racism and discrimination sort of go hand in hand with one another.

Racism is when a belief that all members of a race are inferior or superior to another race. Discrimination is treatment and judgment towards a group of people based on class, age, sex, and race that they are in favor for or against. Discrimination is one I had to deal with on my first time applying for a job once I turned seventeen. I was living in Alice, Texas for the summer and I applied to a small fast food restaurant. I spoke to the manager who happens to be an older white woman on the phone about positions that were open for hire and she was more than willing to speak to me in person.

I walk into the restaurant on the set date to meet and she was surprised when I told her, “Hi, my name is Addy; I am the person you spoke to on the phone about jobs”. She then quickly said, “Were fully staffed now, I am sorry” and walked off through the double doors to the kitchen. I was so upset because I knew it had to do with me being Mexican because I took a look around the restaurant and all the waitresses, cashier, and cooks were white. My dad and I had a long talk of his experiences through his life in regards of discrimination.

He is going to be seventy-two this November and it is sad to know that through all those years discrimination has not disappeared. Also racism is something I currently deal with at my job at Covenant usually amongst the older generation. My position at the hospital is a phlebotomist and it typically is racist comments or even as straight forward as them saying, “Can I have Chance, the white guy? ” instead of me to draw their blood. I have got to the point where it does not faze me much at work because I know I need to keep my composure and stay professional in a situation like that.

Therefore, people of all ages, gender, and race have had an experience where stereotyping, racism, and discrimination were involved. Whether it was directly happening to them or indirectly where they have witnessed it happening to someone else, it still has affected their life in some way. It is how a person handles the situation that makes all the difference. Maybe one day in the near future people will be more accepting of change and differences amongst everyone that diminishes stereotypes, racism, and discrimination. 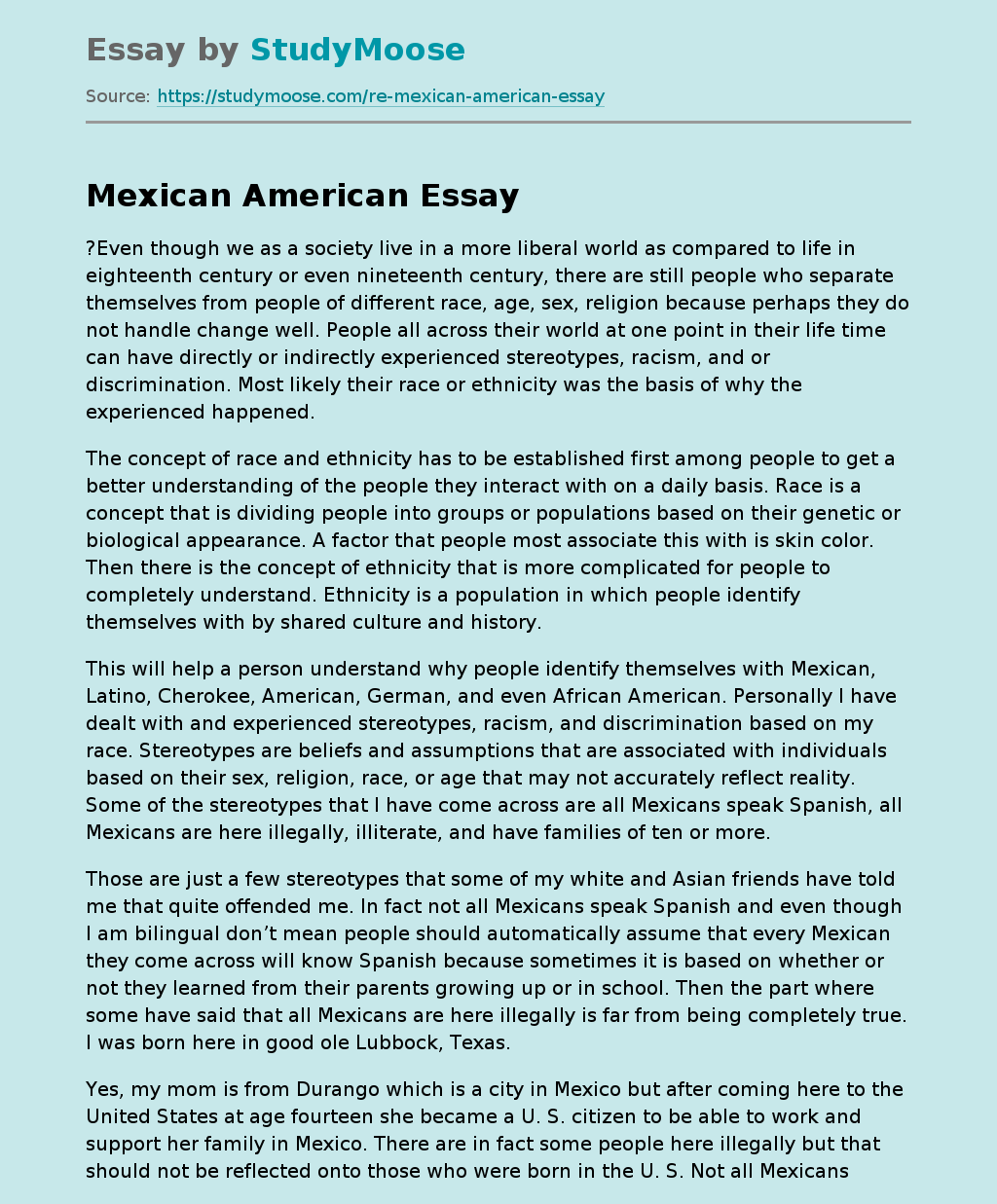