The movie ‘The Hunger Games’ directed by Gary Ross is an extraordinary fictional tale. A tale set in a futuristic dystopia society called ‘Panem’. This nation is divided into 12 districts and a capitol. Every year each district must offer two tributes a male and a female that must fight to the death until there is one remaining tribute out of twenty-four, who later becomes a victor. An interesting character in the film is Katniss Everdene, the films heroine. A District 12 citizen, katniss’s will to survive and furious attitude is shown from the moment we first see her on screen.

Throughout the games we see Katniss challenging the regime and having the will to survive. Even before Katniss enters the games we see her take a maternal role over Primrose, her younger sister. Katniss provides a living for them both. The level of maturity shown through the character Katniss makes her intriguing to the audience, making her and interesting character.

Throughout the film, character Katniss provided the audience with a sense of maternal values and wholesome family principals.

As food is scarce in District 12, Katniss hunts in the nearby district in order for her family to survive, despite the dictatorship her life is ruled by. A full shot of Katniss daringly venturing into a neighbouring district to provide food, shows us just how bad the situation is for the district. The fence that separates the districts can be seen for an immense way, and the close up of the high voltage sign provides us with the feeling of what Katniss would do for her family.

This restores a sense of familiar family values to the audience. The director Gary Ross has deliberate used Katniss’s character to involve our own emotions and connect closer to the film through Katniss’s maternal instinct to keep her family alive. Gary Ross positioned the viewers to feel for her family and the community who are run by greedy sadistic dictators and we feel disgusted for those who try and run others lives through the enforcement of fear. Gary Ross uses Katniss to relate to our problems and us, viewers can understand the challenges Katniss goes through cause they are much like our own.

Katniss show the audience how everybody has the natural instinct to survive
when put in front of difficult situations. Before Katniss enters the games she comes across as stubborn and making friends is not her strong point. Katniss portrays a sympathetic and loving emotion during the games once Hamish, her mentor gave her wise words, ‘you have to make people like you’. Hamish being a past tribute, who became a victor, knows how the games must be played to win. A mid shot on Katniss’s face when told this captures her emotions in a way the lets the audience know the discomfort the news has brought her. Katniss preformed well during the games, and upheld a persona leading up to the games. Together Katniss and Peeta, the male tribute from district 12 forged a fake love for the satisfaction of the government. In a critical moment in the film after Peeta gets injured they use their ‘love’ to receive medication, A single kiss helped them get the suplies they needed with a note attached reading “you call that a kiss”. Katniss is willing to adapt to lying in order to survive. As the audience, we are positioned to understand to understand her point of view, Katniss does not enjoy killing, nor approve however in order to survive she is willing to do what is nessercery, and as viewers we asked left asking what would we do in this situation?

Through Katniss’s character, Gary Ross has led the audience to see how natural human emotions have led Katniss to rebel. A rebellion against the regime ordered by the totalatarian government. When a young girl named Rue from district 11 is murdered due to a consequence of the games, Katniss comforts her as she would with her younger sister, Primrose, this positions the audience to feel sympathy towards the tributes of the games, especially young Rue and we feel ashamed towards the form of entertainment enforced by the government. Katniss’s rebellion is sparked by Rue’s dying last wish ‘ you must win’. Rue is helping Katniss through her battle, so Katniss supports her by showing a symbol of respect towards district 11. Katniss holds up her three fingers towards the camera in a full shot angle to capture the significance of this tiny action. No past tribute has ever done this towards another tributes and Gary Ross uses this action to differentiate Katniss from the other tributes. Katniss’s action brought humanity to the games, which brought hope, and a lot of hope was unwelcome by the Capitol. 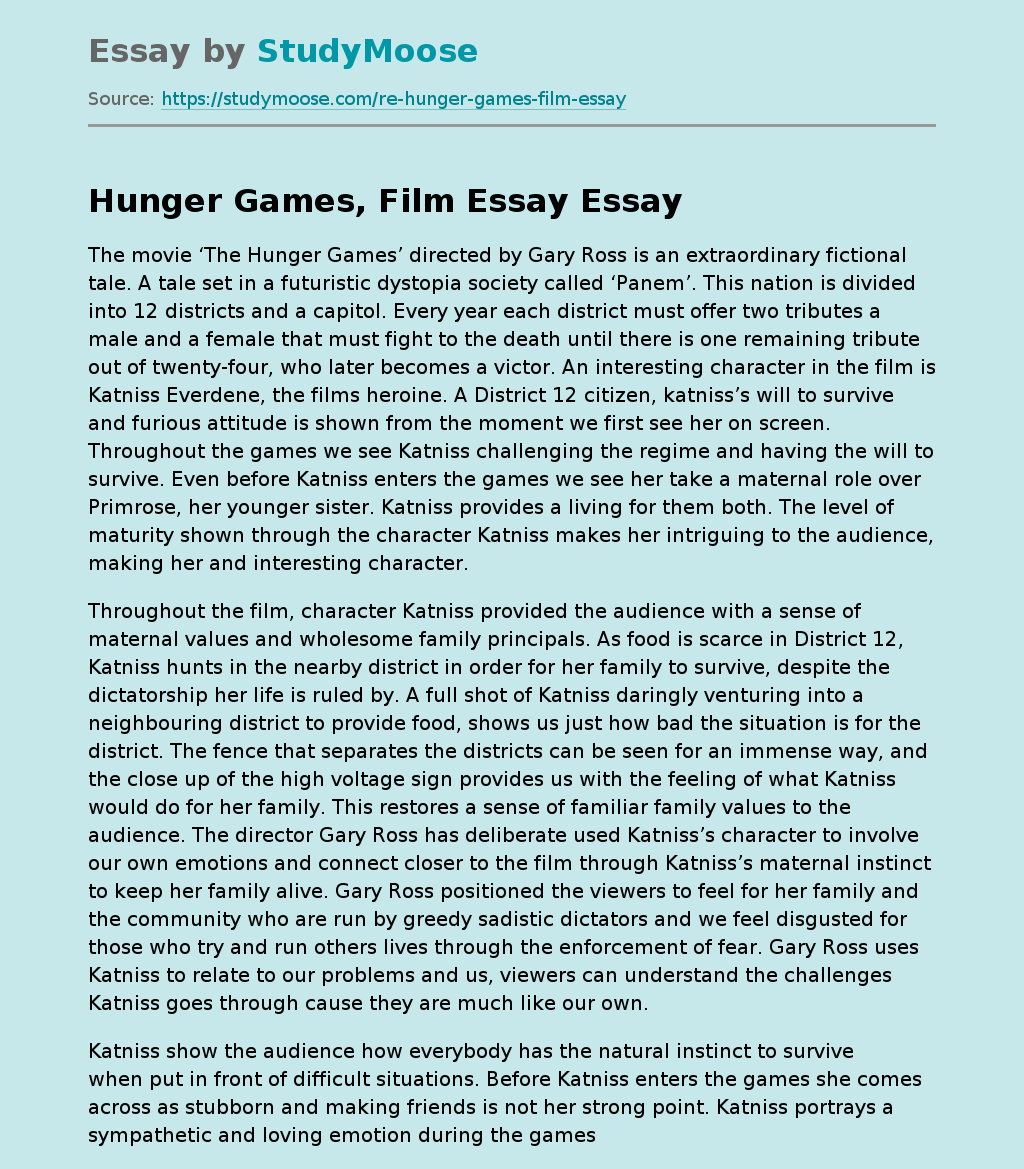