How do TV crime shows and authentic forensic analysis compare and contrast?

What’s the first word that comes to mind when you think of a TV crime show? If I had to choose, it would be clue gathering, or even problem solving. TV crime shows are generally known for the murders and cases behind solving who committed the crime; because who would want to watch a show about a robbery. In these shows, the producers attempt to exaggerate and speed up the process of forensic analysis. As a result, this would contrast to the authentic, or real life process of crime scene investigations.

Don't use plagiarized sources. Get your custom essay on
“ How do TV crime shows and authentic forensic analysis compare and contrast? ”
Get custom paper
NEW! smart matching with writer

Although I do believe that there are many great TV crime shows, I’d have to pick two specific episodes that would clearly identify a realistic and unrealistic visualization of what a forensic analysis looks like; an episode of CSI New York, as most realistic, and an episode of Bones, as the most unrealistic. First, I would like to identify a realistic visualization of forensic analysis by using the episode of CSI New York, Clue SI.

To begin, the CSI’s collected evidence and examined it in a way that exemplified how authentic forensic analyzers would collect/analyze evidence.

For example, they placed some of the evidence in plastic bag in an effort to protect the evidence from possible damage, trace evidence was used, and they took pictures of evidence that was uncollectable, or easier to analyze with a photograph. This showed that they were taking into consideration the inherent problem with crime scene investigation; they knew that evidence would need to be carefully collected, to ensure the smallest amount of modification.

Subsequently, the investigators used bits and pieces of forensic psychology to determine patterns in the crimes committed. To illustrate, they established connections, and reviewed potential motives of the killer. Specific to this episode, the board game “Clue” plays a part to the story; as investigators dig deeper into the crime, they notice that a specific drug was ingested by the two victims, Ellen White, the original victim, and Jane Doe, the later found victim in the series of crimes committed, and only some psychiatrists have access to this drug; the investigators find the psychiatrist, Carly and plot out the crime to find the killer.

Second, I would like to establish an unrealistic visualization of a crime scene investigation, using the episode of Bones, The Memories in the Shallow Grave. Initially, I would group this episode in the unrealistic category because with the evidence they had, they came to conclusions almost instantaneously. To continue, when the investigators were using missing persons reports to compare suspects, they came to a direct conclusion without further investigation; in other words, they knew they had the suspect without corroborating information. The team of CSI’s got the news of who the suspect was, and without deeper consideration, they just followed along. Additionally, evidence they had from the gum underneath the paintball splatter was easily identified with only one tooth impression. Bones, one of the investigators said, “That’s as good as a fingerprint!,” when one complete dental impression may not have been enough to establish who actually did the crime.

With this in mind, they had evidence, but not enough to conclude the suspect as guilty of committing the crime. Finally, I would like to pose the question of “Do crime TV shows really influence jurors or legal professionals when it comes to the criminal justice system?” My answer to this question would be yes for two reasons. To start, in the article by Donald E. Shelton, The ‘CSI Effect’: Does It Really Exist, I found an interesting statement about expectations based off of TV crime shows. More specifically, “As one district attorney put it, “Jurors now expect us to have a DNA test for just about every case. They expect us to have the most advanced technology possible, and they expect it to look like it does on television.”” Jurors wanted more proof to guide them through the conviction process, but could there have been any other information the court could have given them?

To continue, based off a survey taken from the same article mentioned above, jurors had specific apprehensions of what scientific evidence they wished to receive when certain cases were brought before them. To explain deeper, “a higher percentage wanted to see fingerprint evidence in breaking and entering cases (71 percent), any theft case (59 percent), and in crimes involving a gun (66 percent).” (Same article as credit given before.) From shows like Law & Order, and CSI, jurors thought evidence portrayed on TV crime shows, were taken into consideration in real crimes. Established from the findings, jurors overall expected evidence from TV crime shows to be used in authentic forensic analysis.

Does the same word come to mind when you think of a TV crime show? Or has it changed? Depending on your original opinion, your side may have changed or it might have stayed the same. But I still believe that there are many great TV crime shows, and if I had to pick two specific episodes that would clearly identify a realistic and unrealistic visualization of what a forensic analysis looks like, I’d choose these two episodes; CSI New York, as most realistic, and the episode of Bones, as the most unrealistic.

How do TV crime shows and authentic forensic analysis compare and contrast?. (2016, Mar 17). Retrieved from https://studymoose.com/re-how-do-tv-crime-shows-and-authentic-forensic-analysis-compare-and-contrast-essay 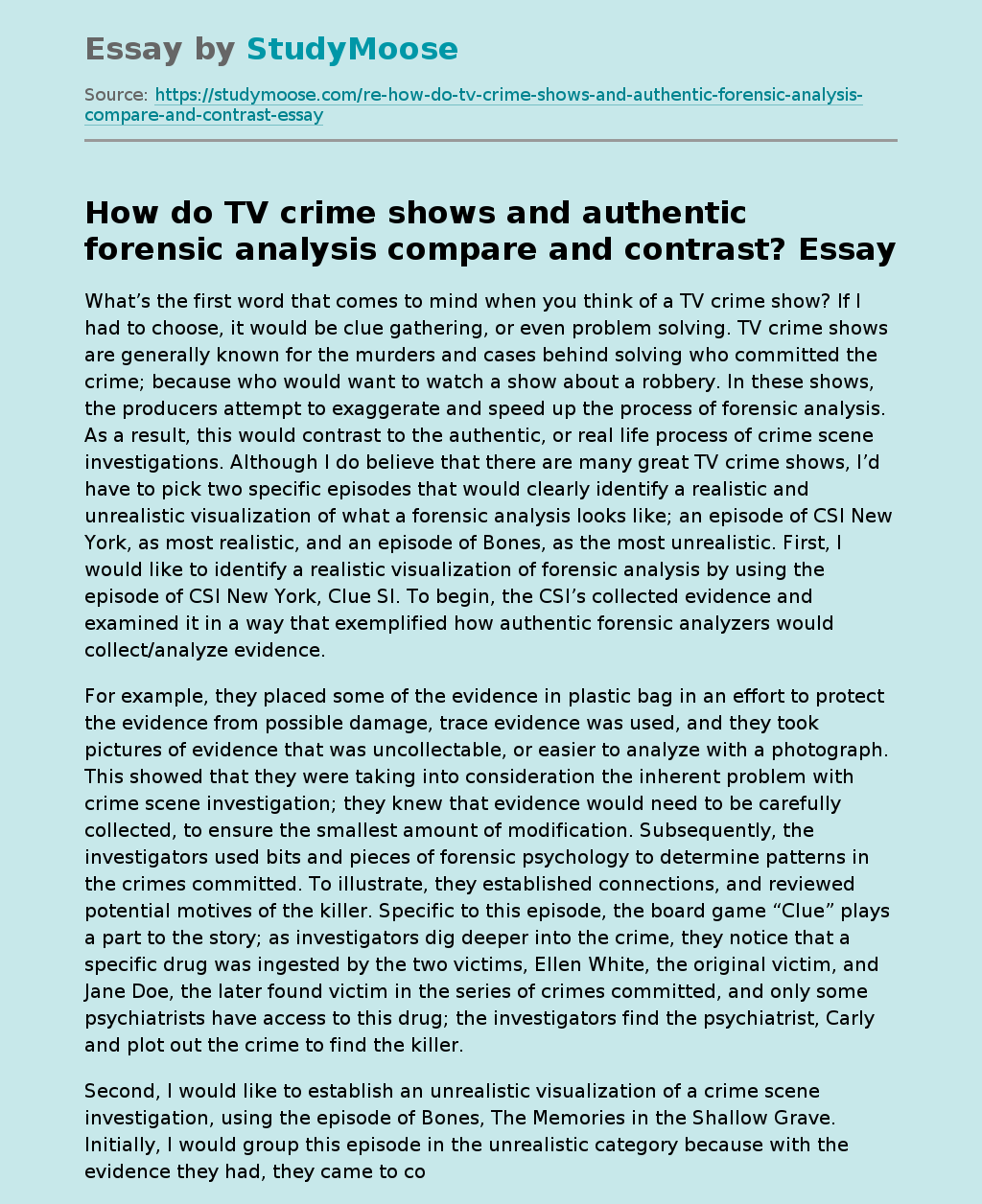