Famous Creative Thinkers in the World

It is said that there is greatness in everybody, and it only requires the right place and time to burst out and bless the world. This planet has been blessed to have amazing people walk among us, and they have revolutionized the way people perceived certain ideologies. Jesus Christ, Leonardo Da Vinci, Martin Luther King, Benjamin Franklin and Voltaire, just to mention a few are accredited to have left a mark in this world. With none claiming to be any special than any other man, they stood out to make this world a more comfortable place to live in during their time.

Don't use plagiarized sources. Get your custom essay on
“ Famous Creative Thinkers in the World ”
Get custom paper
NEW! smart matching with writer

Quentin Tarantino, a film director, actor, producer and screenwriter is one of the great men that the 21st century has been blessed to have. With a creative, innovative and ever awe-inspiring works, Quentin has become a figure in society that many people can look up to. His films are usually characterized by non-linear storylines, a glorification of violence and a satirical subject matter that in most times results in an exhibition of neo-noir characteristics.

His creative genius by the use of mix and match genre as well as an infusion of music and the morphing of old works and making them new and better are his main characteristics that define him. Quentin’s works have always had a cut above the rest because they seek to contribute largely to the society in general. Whether in educating, reminding or entertaining the society, Quentin has had movie lovers at the edge of their seats and in turn, he has received awards for the same.

Quentin has entertaining movies like Pulp Fiction (1994) that is considered one of the greatest if not the greatest movie produced of all time and Django Unchained that seeks to tell the story of slavery.

Movies with stories that remind human beings of their past, or those that make them forget about the daily hassles of life have garnered him success as well as health, although without their share of problems. For example, making of a slavery movie was initially not favored by potential audiences, and it received severe criticism although it resulted to his highest grossing movie of all time. On the other hand, other movies are criticized as having too much violence which is mostly in his line of creativity. The solutions to these problems were primarily making movies that are entertaining and educative, that leave out the brutality of the times that the movies are based on. The second is that the action movies he directs or produces are made for the enjoyment of the entire family, without vulgar language and sometimes incredible humor.

For a creative thinker, obstacles are a daily routine since thinking outside the proverbial box is commonplace. For Quentin, research is the initial step towards a resolute creative thinking process. This means a lot of reading and comparisons of different scripts and different possibilities. Tarantino’s creative thinking process revolves around all matters that seem reasonable and worth investing in, promoting ideologies and uplifting talented scriptwriters. Although he is attributed to having anger issues, his movies cannot be remade any better without denying the audience their intended purpose. For example, Django Unchained was meant to educate and remind the American of the past that they are too ashamed of to remember. His works fit perfectly in the 21st century movie making field where creativity and the ‘anything goes’ attitude is prime. Having been an avid movie fan, a trained actor, movie critique and an investor, Tarantino has continued to expand both his knowledge and skill in the movie world.

The age of computing has revolutionized the 21st century and the world has become a better place with computers. The age of computers, as this century is commonly referred to have experienced profound effect in all industries that have chosen to adopt the technology. Grace Murray Hopper (nicknamed ‘amazing Grace’), an American computer scientist as well as the United States navy rear admiral had notable contributions to the world of technology and modern warfare. She is among the pioneer programmers of Harvard Mark one computer, and she developed the first compiler for a computer programming language. This was her first most significant contribution to society. She is also renowned for popularizing the term ‘debugging’ as a term for fixing computer glitches.

It is probably because of her sense of patriotism that she volunteered to join World War II, and she was sworn into the Navy reserve where she gained an exemption to enlist because she was underweight. This was among the first hurdles in her career, but what she did not have in physical attributes; she more than made up for them in brains. Throughout her career in both industry and academia, Hopper was a consultant for the United States Naval Reserve as well as a lecturer there. She held several posts in leadership through her career both outside the Navy and also within the Navy. Her technical and marketing skills proved to be of great use to her as she also demonstrated superb political and general business acumen.

The major hurdles that she had to overcome were the computer bugs that she was working on while in Harvard. However, working alongside brilliant minds, she co-authored several papers on computers. By the virtue of patience and perseverance, Hopper was able to tackle many of the problems she faced by herself, but in some, she got the assistance of fellow brilliants. She is said to have never turned down a good idea from anyone regardless of their rank in the military of in the lab. By being involved in the successful programming of Mark I through III computers, she was awarded the Naval Ordnance Development Award.

Nothing could have been done any different at the time, and up until now, the Mark computers are still formidable in the market. With the age of computing, Hopper’s works fitted perfectly with her time, and her innovations remain a valuable contribution to human beings. By being involved in the university’s academic program, Hopper was able to learn and continue to excel in her field of study and expertise. Up until her retirement, she was a lecturer and an academician whose contributions were noted and highly regarded. Until her death in 1992, Hopper remained an invaluable asset for the United States Navy, Harvard and the World at large. For that, the USS Hopper (DDG-70) Navy Destroyer and the Cray XE6 “Hopper” supercomputer were named after her in the United States Navy and NERSC respectively.

Famous Creative Thinkers in the World. (2015, Aug 08). Retrieved from https://studymoose.com/re-famous-creative-thinkers-essay 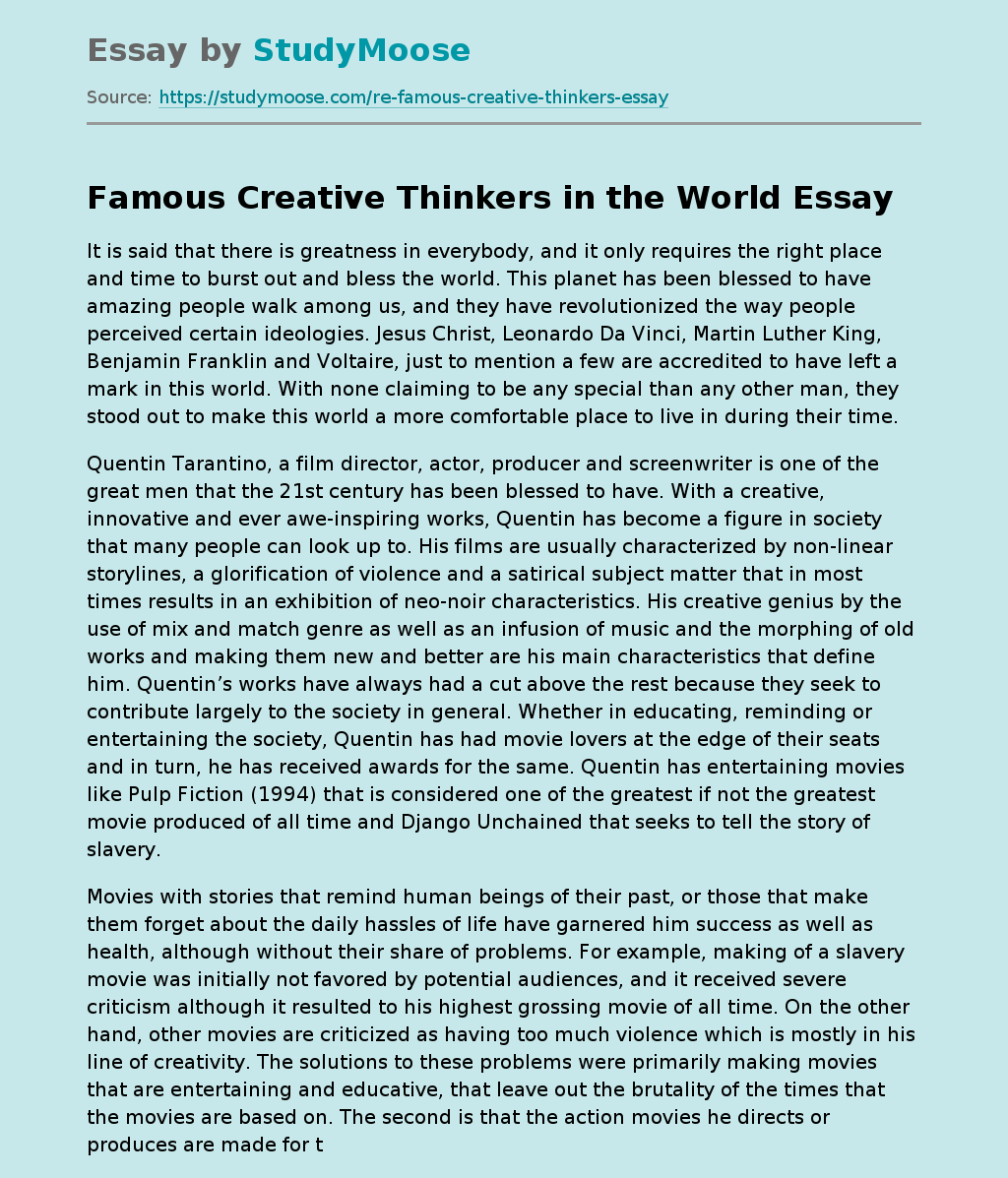