Next time you have a rough draft that you’re completely freaking out about and not thinking it’s up to your typical standards, don’t stress about it! I am now a freshman in college and what I’ve learned in my English 150 class these past two weeks has made me rethink my former days with my high school rough drafts and essays in general. There are constructs, also known as a myth that Mrs. Wunder, Mrs. Harvey and Mrs.

Don't use plagiarized sources. Get your custom essay on
“ Dear Former Self ”
Get custom paper
NEW! smart matching with writer

Klawonn have told you over and over again the past four years of your high school English that you have to include in your writing, or you could also think of it as something that is a “rule” that you supposedly always have to follow, but what I’ve discovered is that you don’t always have to do them. One of the first constructs I came across was the construct that your first draft equaling your final draft.

I read an article in class the other day titled, “Shitty First Drafts” by Anne Lamott, the title alone seems extremely intriguing, but it talks about how even the best writers have absolutely no idea ahead of time as to what they are going to write about.

Lamott said, “Very few writers really know what they are doing until they’ve done it. ” This is basically saying don’t put so much pressure on yourself!

Its ok if you have a writer’s block or that you’re so lost as to what to write about, it clearly happens even to the best of the best! The second construct I discovered was the construct saying that “good” writers have no error and that they follow all these so-called “rules”.

Well I read a chapter from a book that made me rethink this thought, “Leave Your Language Alone: The ‘Speech Error’ Hoax”. McWhorter, the author, addresses this construct by informing us that he himself had 100 errors in that chapter we read alone.

He reinforced his view by also saying, “Even among works agreed to represent the “best” English written, it would be difficult to find one without a number of dangling prepositions and split informatives. ” This is just saying that we just view all professional writing as writing without mistakes, but like he says, if you look for it, you will definitely find it, you will find mistakes in all types of writing. We tend to only look for errors in certain peoples writing, for example teachers look for errors in our writing.

I hope after reading this letter you can see that you have been taught these myths and that you don’t need to stress over your first draft writing, they aren’t the rules your teachers made them seem like. ooEven though apparently we are have to be perfect writers and know exactly what we want to write right off the bat is just something that high school pushes on you, it’s a myth and clearly not true. I hope this helps you keep your head up and helps you not put so much pressure on yourself! Sincerely Kimberly Keller. 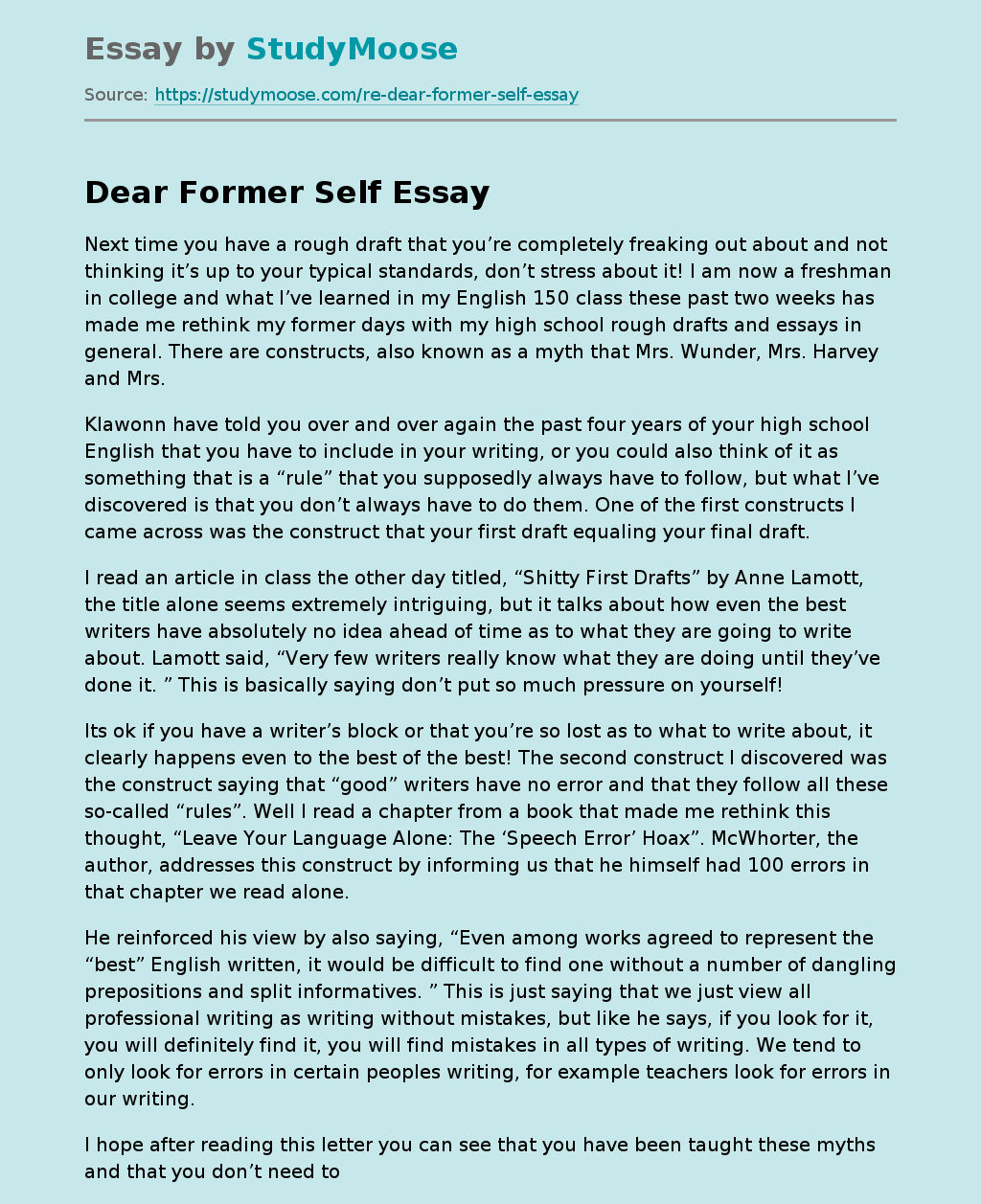