Compare and Contrast Poems by John Donne and Michael Drayton

The poem, To his coy mistress is very much Carpe Diem but the poet Andrew Marvell who wrote it was influenced by both Metaphysical and Classical types of poetry, the way in the beginning of the poem he seems to talk about things in a very slow way, walking, time slowing down to try to woe the women in a much quicker, the poem also shows a lot of Petrachan influences as when Andrew Marvell says ‘Thine eyes, and on thy forehead gaze’ and ‘Thy beauty shall no more be found’.

Don't use plagiarized sources. Get your custom essay on
“ Compare and Contrast Poems by John Donne and Michael Drayton ”
Get custom paper
NEW! smart matching with writer

The poem is very much more in use of words that show the women in which the poem is talking about as being a goddess as I said earlier; this seems to play a large part in the poem. poem which is also very Carpe Diem is, to the virgins, to make much of time, this poem uses irregular (starvea) stress’ and unstressed’ words, but does have a regular amount of feet throughout the poem.

The poem The Flea is very different to the other two before, it is a metaphysical poem which is much more interesting, it uses a much more dialectic view of wooing a women.

It uses the fact that as a flea has bitten both the poet and the women of whom he is in love with, that it means that there are three lives all together in one and that him and his love almost ‘more than maryed are’. The structure of the poem uses the end of each paragraph as a conclusion for what it has just been stating.

The poem uses imagery as it describes the two lovers together in the Flea with its dark walls of ‘Jet’ referring to the colour jet black as there is no light in the Flea.

At the end of the poem it shows that the women is wanting to kill the flea and he is comparing himself to the flea and saying that the flea is innocent because all it has done is take a tiny prick of blood from her and is it really worth the fleas life. The poet is using the idea of persuasion on the women by using the flea as an example. When it comes to the conclusion of the last paragraph it shows the poet’s persuasion again for that by the women killing the flea it has taken a small bit of life away rom her as it bit her and took some of her blood. The poet is much more different to the previous poets also as his persuasion has much more of a point to it, and uses a more intelligent argument against the women. The next poem was Song. To Celia, this is a classical poem which emphasises carpe diem is interesting. The poem is not in a common dialectic structure, it does have a felling that the poem is mainly based on the, fast, quick, instant love at the start of the poem.

The poem involves a very large part at the end of an affair scene where Ben Johnson writes ‘Of a few household spies? Or his easier ears beguile,’ this is speaking about the servants of the house in which the women which the man is involved with stays at, that they will only have to trick the servants from seeing them together. The structure of the poem is done using rhyming couplets and a trochaic tetrameter, the poem can be related to, to his Coy Mistress as it is also Carpe Diem.

The view of country is very much like a place that would be very hard to find in life; it is a much idealised view. The poem Sonnet is a very strange one; it does not have a set pattern for its rhythm and is very staggered. It involves the poet explaining all the different ways in which he loves the women in speaking. It uses classical influences with the poem having no persuasive felling to it. The poet uses Petrachan factors as the poet says about he loves all the aspects of the women, her breath, loving her freely, and purely. 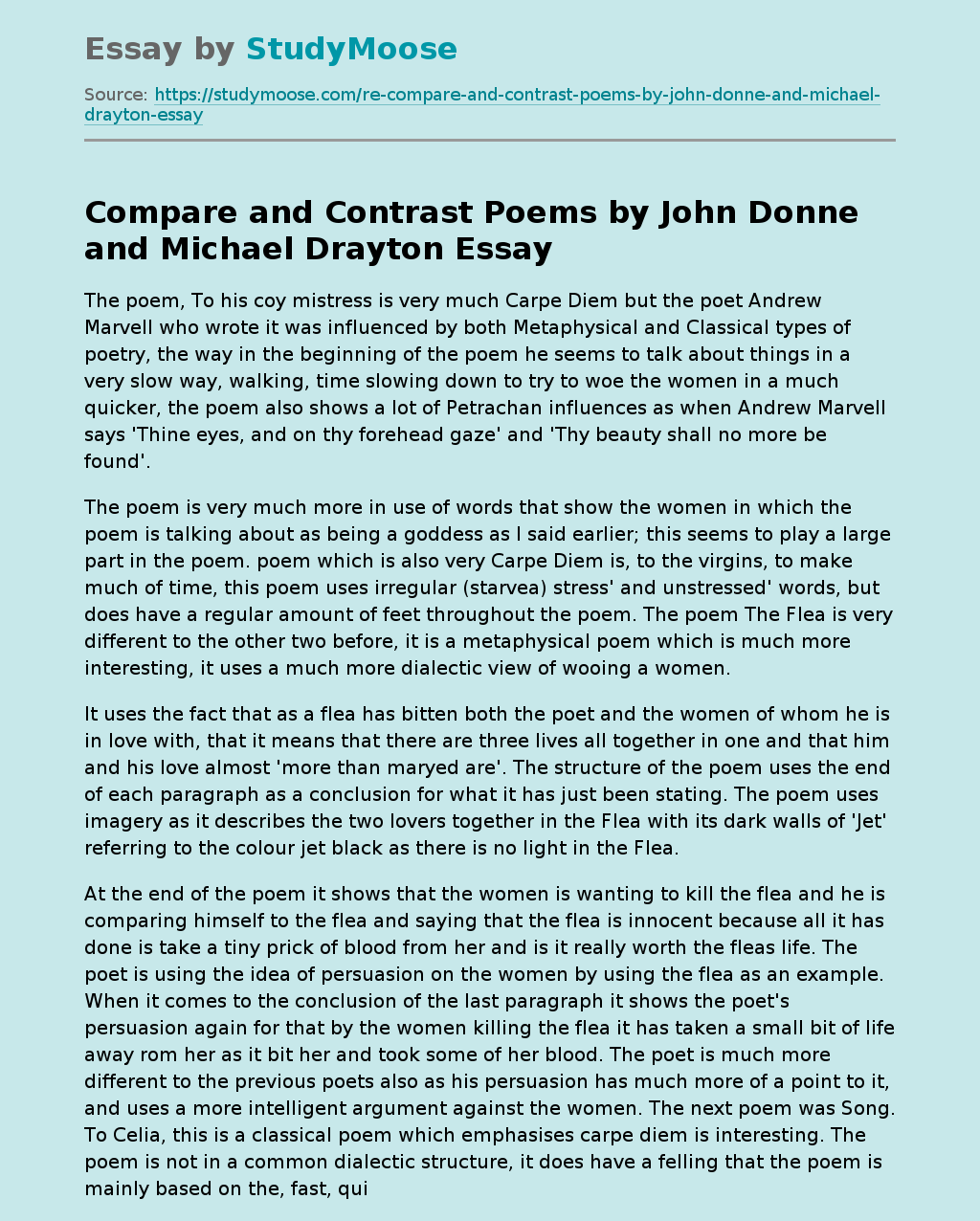