Bad Habits: Attitudes of Filipinos That Need to Change

When someone celebrates birthday, graduation or winning the lotto in the neighborhood, the party lasts through deep in the night, keeping neighbors awake by the noise of an out of tune videoke singer.

Even after agreeing to meet at a certain time, some Filipinos manage to fail this initial agreement, using alibis as traffic, got caught up with something or lost in the way, disregarding the feeling of someone who just complied with agreed time. If these folks can’t fulfill simple tasks, can we trust them when it comes to, say lending them our prized books or CDs, loaning them money or anything they promise?

Many Filipinos complain of being racially profiled (Filipinas in Middle East are easy to get or gullible) but some of us look down on other people such as Indians as fellows with strange body odor who live off through usury. Or on Chinese neighbors who own bigger stores in the market as penny-pinchers.

But we can’t look at ourselves and fix our flaws. Worse, see #6.

Wants to know who are his or her stalkers at social media. Installs ‘who are my top viewers’ application which turns out as a link to a malicious website. Wants to get everybody’s attention to the point that they post celebrity, semi-naked or suggestive profile photos

While admittedly deeply religious people, many of us Filipinos are also living a life of hypocricy/inconsistency. Outside of the Quiapo church are shops that sell abortion formula and the island of Siquijor becomes a haven of faith healers who practice black magic.

We easily go ballistic whenever the word Filipino is used as dark humor in a script of an American sitcom or acelebrity mocking our “presumed” perfect accent. We are quick to call for apology even if they’re all meant as a joke. That may be a reason we become a topic of humor.

Some Filipinos prefer to receive a few hundred pesos in exchange of favors to a politician running for office rather than resist temptation and bond together for a better society and governance. Poor tricycle drivers are allowed to ply on dangerous streets — risking the lives and limbs of passengers — just to earn a living.

When going to the market, some Filipinos prefer to take the motorized bike and pay a premium instead of a 20-minute walk — to ensure a favorite TV show will not be missed. At the end of the day they lament how a hundred peso bill could no longer be stretched. Or they spend the whole day staring at the television, sending SMS on shows that offer prizes to ‘home text partners’.

Many Filipinos live off talking about affairs of other people. Maybe that’s because it’s a major function of the Filipino culture. Who impregnated a neighbor’s teenage daughter? A barrio councilor has bad breathe. The baby of a close friend has a striking resemblance of the family driver. No wonder many families are broken, trust lost and friendships gone awry because of people trying to get in the way.

Pass laws that are easily broken: no smoking on jeepneys, no jaywalking on streets, picking flowers in the park or peeing on fences, trees or truck tires. Even wearing prescribed attire (‘please wear semi-formal wear’) when attending wedding ceremonies becomes a task difficult to. When we’re overseas we find it necessary to follow rules, but we seem to take our country and its simple laws for granted.

Once a fledgling banana cue business becomes the talk of the barrio, everyone is riding the bandwagon and put up the same business. Eventually, every single banana cue business in the neighborhood fails and shuts down operation. If someone gets promoted at work, some Filipinos are good at making up stories; did he date the supervisor? Did she sleep with the manager? It also exists in the form of protectionism. Insecurity or lack of creativity drives this attitude.

A bright yet not well-connected job applicant never gets the job position because it was reserved for a family member of an incumbent official or a reward for supporters of a candidate who just won in the elections. A well-connected passenger gets the airport’s special lane while hard-working OFWs sweat it out on a long line.

Some Filipinos have got the nerve to crash into wedding parties uninvited or show up at a birthday party because they were brought along by a friend of an invited friend. They enjoy free electricity supply through illegal connections or enjoying a bonanza of free water from busted pipes instead of reporting the apparent waste or scarce resources. Often visits the house of a balikbayan/OFW who just arrived and ask — they don’t wait — for presents.

Filipino politicians often change parties not because they found a better principled group, but to gain something — power, money or fame. When momentum shifts, be prepared to jump ship and switch loyalty. Read their biographies and be not surprised they’ve been into various alliances with no real accomplishment to show.

Appointments are never meant to be on time as many Filipinos make it a habit of not making it on time. Meetings, parties, and so on. Teachers didn’t lack the motivation to make us punctual as tardy ones were meted with appropriate punishment. Shall we blame others for this? Traffic congestion, slow jeepney driver, hard to find location, ‘I was robbed’, and others in an endless list of alibis and excuses.

Gathering of friends isn’t bad. But if it always meant 20 bottles of hard liquor meant to be consumed overnight, that’s something. Just got the job? Let’s celebrate and have a drink. Just got the paycheck, let’s have a drink. When someone starts reminding them to be frugal and slow down on alcohol spending, they reason out, “it’s my money, you have no business interfering”, “this is just once in a while” or “I need to drink to forget my problems”. Yeah, right.

Some Filipinos are overly dependent on relatives working overseas that they don’t look for jobs or don’t attend classes because they are in “abundant supply of financial aid”. Worse, money remittance from OFWs are often spent only on luxuries like mobile phones and jewelry they can brag to friends. In many cases, nothing was allocated for savings or investment. When OFWs come home, families find it hard to explain where money was spent.

Bad Habits: Attitudes of Filipinos That Need to Change. (2017, Jan 06). Retrieved from https://studymoose.com/re-bad-habits-attitudes-of-filipinos-that-need-to-change-2-essay 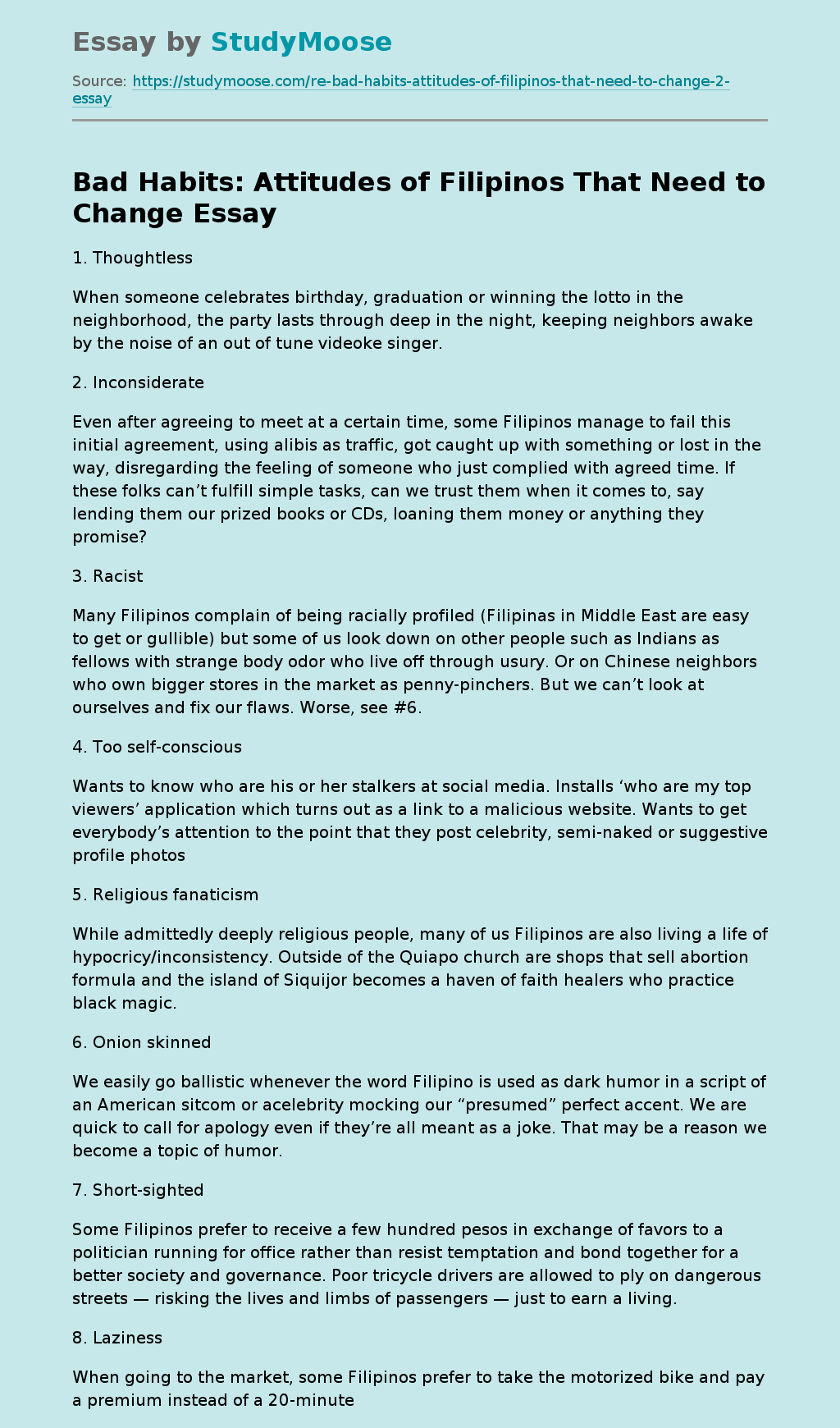