Everyone has dreams, everyone had desires, but sometimes these can make it hard to think of someone besides one’s self. Sometimes these dreams and desires can fill the heart, making it nearly impossible to even consider the needs of others. For most people, it can be hard to put others first, but in the end, it is the right thing to do. At the beginning of “Raymond’s Run” by Toni Case Bambard, Squeaky’s main focus is running and winning, but by the end of the story, Squeaky comes to realize that life isn’t all about her self.

Don't use plagiarized sources.
Get Your Custom Essay on Raymond’s Run Just from $13,9/Page

At the beginning of the story, Squeaky is a confident girl and she knows that she has talent. She is a very fast runner; in fact, she is the neighborhood’s track star. She is confident that she is the fastest, this is seen when she states “there is no track meet that I don’t win” (Pg. 59 paragraph 3) and that she has been winning since she was a “little kid in kindergarten” (Pg.

However, her main focus is running and winning, this makes her a bit confrontational and at times, absent minded to her special needs brother, Raymond. Squeaky knows she is a talented runner, but she is quick to confront other girls when they annoy her. She also makes it clear to other girls that she is the fastest runner in town and will easily beat them in the town race. Despite this Squeaky is loyal to her brother, and is always ready to protect him. When ever people talked trash to her brother, she stand up and say “You got anything to say to my brother, you say it to me.” (Pg. 62 paragraph 12) She’s a person, who doesn’t tolerate standing and listening to people talking trash, shed rather get things right and over quickly. Squeaky is scared of no one.

Later when Squeaky decides to participate in the town race, she leaves Raymond in a swing. However, right as the race begins, Squeaky sees Raymond positioning him self by the fence for the race, Although he is not actually competing, Squeaky can see that Raymond knows what he is doing, despite the facet he has never ran a race before. As the race commences, it is oblivious to everyone but Squeaky, that Raymond is running an imaginary race and that he is indeed a fast runner. At the end of the race, Squeaky has won, but she no longer cares about the race. At the end of the story, Squeaky has had a change of heart.

She sees that Raymond has talent, and her original values don’t matter anymore. She no longer cares if she won or lost, she is just happy she is just happy for her brother. She realizes that she doesn’t have to be a runner, but can anything she wants, a runner, a coach, a spelling bee champion, a pianist; she just had to work hard on it. She realizes that she can coach Raymond and give him something to accomplish, and perhaps, this is what she was meant to do in the first place. She doesn’t need to prove herself. She has learned that life’s not all about herself, but rather, about helping others. In “Raymond’s Run”, Bambard uses Squeaky to model the average human. All people are self-centered in nature, which is the inevitable.

Like most people, Squeaky starts out and an overconfident young girl, focused only on her own wants and desires. She finds it hard to think of others. In truth it is much easier and simpler to think only of oneself. However, Squeaky comes to realize that her desirers have blinded her to her brother’s abilities. Her own talent clouded her from her brother, preventing her form seeing that she had the chance to give her brother something to be proud of. Bambard uses this realization to show her readers that even though putting others first is hard, it is the right thing to do.

Squeaky may have started out as a confident and confrontational girl, with her main focus being racing, but after seeing her brother run, that changes. Squeaky comes to realize that racing isn’t everything and that her brother has untapped potential, potation that every one overlooks. She discovers that, even though it’s hard to put others’ desires first, it really is the right thing to do. She comes to dedicate herself coaching Raymond and by doing so, she can give her bother something to accomplish, and perhaps, this is what she was meant to do in the first place. Squeaky helps readers learn that life’s not all about oneself, but rather, about helping others. 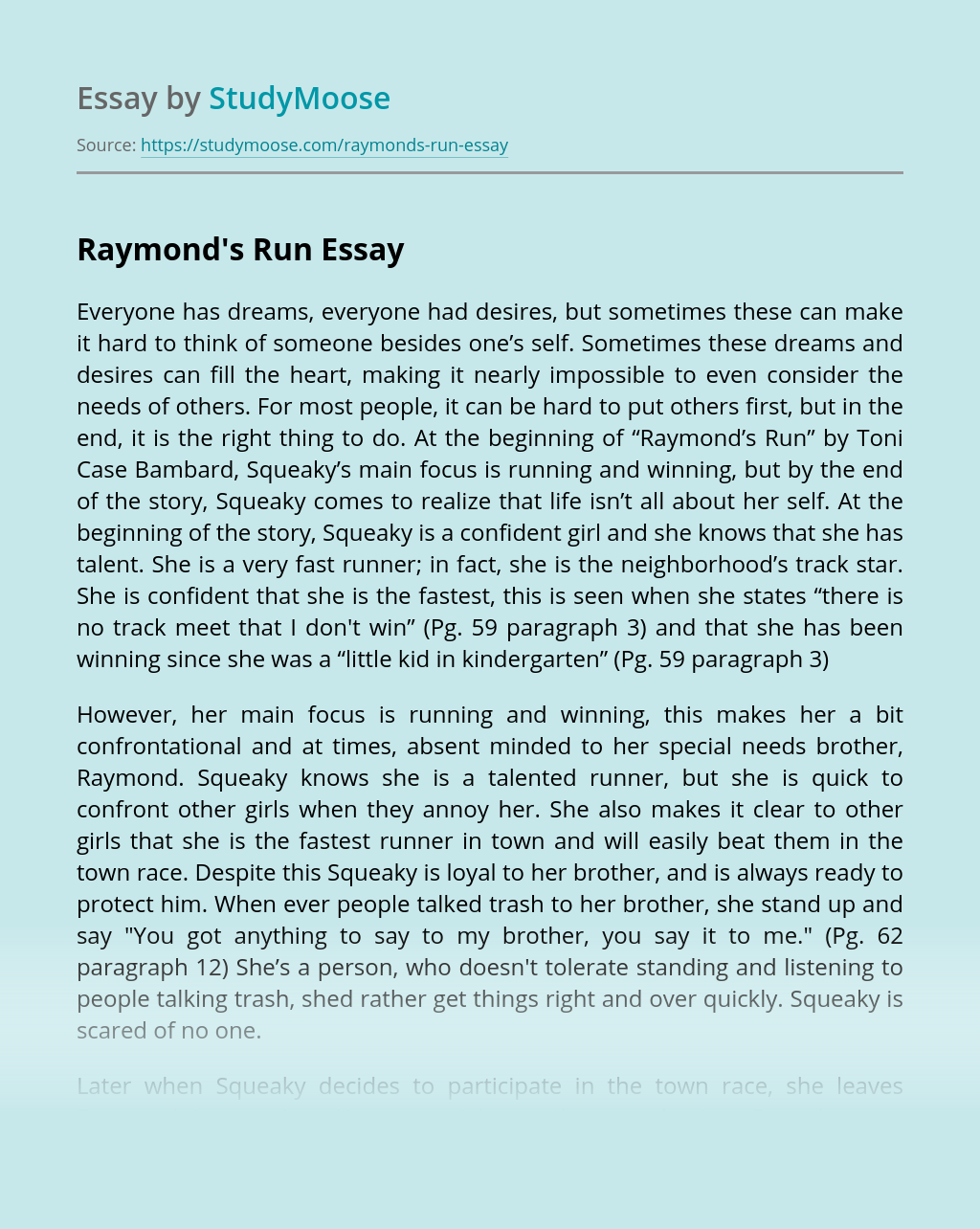 In the poem by Grace Nichols ‘Of course when they ask for poems about the ‘Realities’ of black women’, this poem contains certain splits which reflect upon her experience as an immigrant moving from the Caribbean to the United Kingdom and how she collaborates her two worlds together, by using both Creole, the language from... VIEW ESSAY

The racial achievement space in the United States is the instructional disparities between numerous ethnic groups. It is more manifests in African-America and Hispanic. These ethnic groups take place since trainees of those race are more likely to receive low grade in school, on their standardize test, even drop out of high school and is... VIEW ESSAY

In Hip-Hop’s Betrayal of Black Women published in Z Communications online magazine July 1, 2006, Jennifer Mclune responds to Kevin Powell’s Notes of a Hip Hop Head by vividly expressing to feminist and African American women that “Hip Hop owes its success to the ideology of woman hating. It creates, perpetuates, and reaps the rewards... VIEW ESSAY

Definition of Racism rac*ism n (1936) 1 : a belief that race is the primary determinant of human traits and capacities and that racial differences produce an inherent superiority of a particular race 2 : racial prejudice or discrimination Webster’s Ninth New Collegiate Dictionary Segregation The separation of groups of people by custom or by... VIEW ESSAY